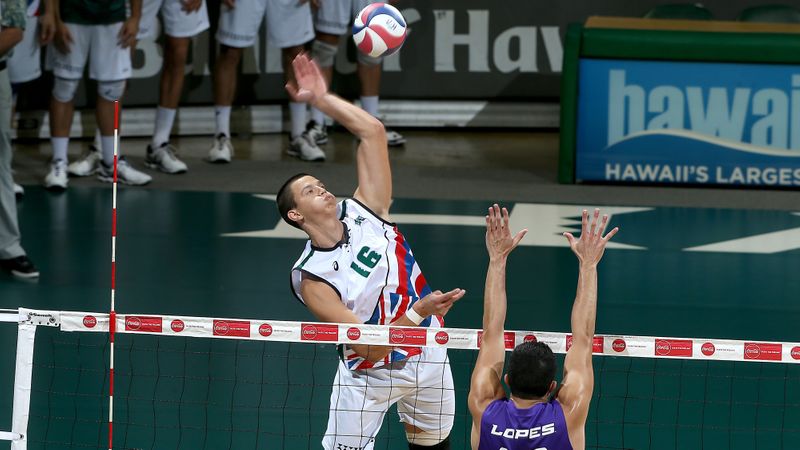 Rado Parapunov went off with 19 kills in the upset over Long Beach State on Saturday night. Archive Photo via Hawaii Athletics

HONOLULU – After losing to Long Beach on Friday night, the Rainbow Warriors came back with a vengeance on Saturday, leading to another nail-biting five set match. This time, however, Hawaii was able to pull out the upset and win. This is the first loss for the 49ers all season.

Hawaii was led in kills by Rado Parapunov (.256) and Stijn van Tilburg (.268) with 19 and 17 kills, respectively. Larry Tuileta led the defense with 15 digs on the match. Setter, Joe Worsley, led the team in assists (51) and added four blocks.

Leading the Long Beach State offense was junior outside hitter, TJ DeFalco, with 25 kills on a .396 clip. He added 10 digs for a double-double on the night. Kyle Ensing also had a double-figure performance with 14 kills on a .270 hitting percentage and 4 digs. Ensing’s 13th kill of the night marked his 1,000th career kill. Setter Josh Tuaniga ran the offense with 52 assists and added 8 digs and a three blocks.

Long Beach has a bye in the Big West Conference Tournament and will play on Friday, April 20th. Hawaii will take on UC Irvine or UC San Diego that same day.

HONOLULU – For the second straight night, the sixth-ranked University of Hawai’i men’s volleyball team took the nation’s top-ranked team Long Beach State to the limit and unlike the previous night, the Rainbow Warriors came away with a five-set victory, Saturday night at the Stan Sheriff Center. Set scores were 25-21, 22-25, 23-25, 25-20, 15-11 in a match that lasted one minute shy of three hours.

The Rainbow Warriors (18-7, 6-4 BWC) spoiled the Beach’s perfect season, handing them their first loss in 25 matches. With the win UH locked up the No. 2 seed in next week’s Big West Tournament in Long Beach, Calif., by virtue of winning a tie-breaker with UC Irvine.

Following the match libero Larry Tuiletaand defensive specialist Mamane Namahoe were honored during the traditional “Senior Night” ceremony that included lei from family and friends, a tribute video, and an impromptu haka by the team. Tuileta wrapped up his final home match with 15 digs.

The 49ers (24-1, 9-1) will host the Big West Tournament at The Pyramid and are the No. 1 seed.  Both LBSU and UH earn first round byes and will next play in Friday’s semifinals.

Opposite Rado Parapunov led the Warrior attack with 19 kills, hitting .256 while outside hitter Stijn van Tilburg added 17 kills and three service aces. Middle blockers Dalton Solbrig and Patrick Gasman each had nine kills while Gasman had a match-high seven blocks.

Setter Joe Worsley led the UH offense to a team hitting percentage of .328, compared to .311 for the Beach, who was led by TJ DeFalco’s 25 kills and 10 digs. Kyle Ensing added 14 kills and two aces for the 49ers.

Unlike Friday’s loss, which UH failed to capitalize on four match points, Saturday’s match ended with the Warriors scoring the final four points of the match. On Friday, freshman defensive specialist Gage Worsley committed a costly service ace with UH holding a 14-12 lead. With the Warriors holding a 13-11 lead on Saturday, he came through with an ace, giving Hawai’i match point. Parapunov ended it with his 19thkill.

Just like the previous night, the teams traded the first two sets with UH winning the first and LBSU taking the second. In a pivotal Set 3, the 49ers strung together three straight points for a 21-18 lead and sided-out the rest of the way with van Tilburg committing a net violation on set point.

In the deciding fifth set, consecutive kills by van Tilburg gave UH a 6-3 lead but the Beach answered back to tie it at 8-8 after DeFalco stuffed Parapunov. The score was tied twice more at 10 and 11 before the Warriors closed out the match.

With the loss, the Beach move to 24-1 overall and 9-1 in Big West Conference action. Meanwhile, the Rainbow Warriors improve to 18-7 on the year and 6-4 in league competition to secure a No. 2 seed in the Big West Tournament.

The bright spot in the night for LBSU came in the fourth set when junior opposite Kyle Ensingregistered his 13th kill of the match to reach 1,000 kills in his career. Ensing becomes just the 22nd player in Long Beach State Men’s Volleyball to accomplish that feat.

Ensing finished the night as the team’s second-leading scorer with 14 kills. He came in behind teammate TJ DeFalco who led all scorers with a season-high 25 kills on a .396 attack percentage. DeFalco also contributed 10 digs for his fourth double-double of the season and 14th of his career.

At the net, redshirt junior Nick Amado posted six blocks to lead the Beach, while DeFalco added five, and Bjarne Huus and Ensing could each contributed three block assists for LBSU.

On the night, Long Beach State posted an attack percentage of .311, while Hawaii hit .328 marking the first time this season the Beach have been out-hit.

Hawaii used the first set to take a 1-0 lead over Long Beach. The Rainbow Warriors took the lead early and following a 2-2 tie, held it throughout as they edged out the Beach, 25-21.

Long Beach State was quick to counter winning the second set, 25-22. The Beach used a 6-0 scoring run highlighted by an Ensign service ace as they broke the game open before winning the set by three and evening the match at 1-1.

The Beach posted their highest hitting percentage of the match in the third set, hitting .464 (16-3-38). LBSU and Hawaii fought through 10 ties and four lead changes in the contest before Long Beach State earned a 25-23 victory to take a 2-1 set lead in the match.

The `Bows controlled the fourth set as they held the Beach to just a .138 attack percentage in the frame. Hawaii held a four-point lead (15-11) at the media timeout that they would not give up. Despite LBSU’s efforts, Hawaii came away with a 25-20 win.

For the second time in as many days, Long Beach State and Hawaii found themselves deadlocked and heading into a fifth set. However, this time around, the `Bows earned the win by a score of 15-11 handing Long Beach State its first loss of the season.

Hawaii had two scorers in double-figures as Rado Parapunoov (19 kills) and Stijin van Tilberg (17 kills) who each contributed on both sides of the ball.. Setter Joe Worsley led the way with 51 assists, while Larry Tuileta (15 digs) and Patirck Gasman (7 blocks) led the Beach on defense.

The Beach have secured a bye in the Big West Conference Tournament next week and will play on Friday, April 20 at 7:30 p.m.