#5 Minnesota Earns 11th Sweep Of Season In Win Over Iowa 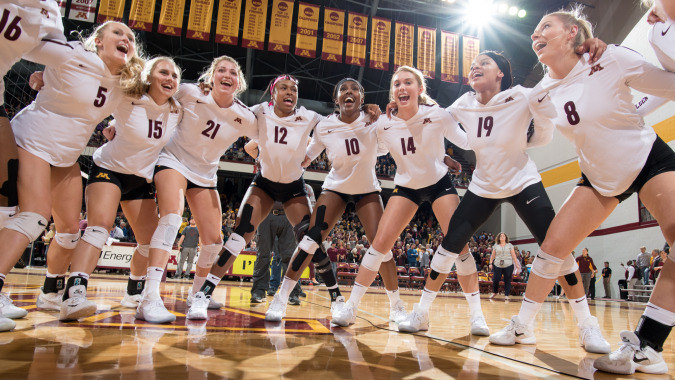 Minnesota picked up their 11th sweep of the 2017 season with a win over Iowa at home. Current Photo via Minnesota Athletics

Minnesota picked up their 11th sweep of the 2017 season with a win over Iowa at home.

The first set saw the Hawkeyes build up a 9-6 lead over the Gophers early maintaining this lead until Minnesota fought back to tie things at 10-10. The Gophers pulled ahead on a kill from Molly Lohman and attack error from Reghan Coyle at 12-10 but Iowa stayed close throughout the set. The Hawkeyes regained the lead at 17-16 off a kill from Gabrielle Orr then 18-16 on a Minnesota error. Iowa kept this lead going until they were up 22-19 but a string of kills for the Gophers turned things around as they took the first 25-23.

Iowa Started off with the lead once again over the Gophers at 7-3, but a challenge from Minnesota brought things to 7-4 and Iowa lost their momentum. Minnesota took the lead and ran with it until they were ahead 18-9. Iowa fought back with a 4-0 run following a timeout before Alexis Hart stopped the run. The Gophers initial lead was too much for the Hawkeyes to fight back from with a Regan Pittman kill ending the second 25-18.

The third set started off a close battle once again but the Gophers were the ones to pull ahead this time, taking a 13-7 lead. Minnesota continued to build on this lead until they went on a 3-o run to end the match with kills from Lohman, an Iowa error and a block by Stephanie Samedy.

Minnesota was led by Hart with 16 kills on a .412 hitting percentage along with five digs and four blocks. Samedy added another 11 kills and four blocks while Pittman posted 10 kills on a .471 hitting clip. Lohman ran the show at the net defensively, posting nine blocks and nine kills on a .412 hitting performance. Setter Samantha Seliger-Swenson dished out 39 assists and 10 digs for a double-double. In the backcourt, Dalianliz Rosado and Lauren Barnes picked up 14 and 11 digs, respectively.

For Iowa, Jess Janota and Claire Sheehan posted nine kills while Orr handed out 28 assists and 12 digs for a double-double. Annika Olsen picked up a match-best 21 digs in the loss.

Alexis Hart lead Minnesota with 16 kills and hit .412 in the game. Regan Pittman added 10 and hit .471, Stephanie Samedy tacked on 11 kills and Molly Lohman had nine kills and nine blocks. Samantha Seliger-Swenson added a double-double when she had 39 assists and 10 digs. Dalianliz Rosado had 14 digs, while Lauren Barnes had 10.

The Gophers are set to travel to Ohio State on October 18th to face the Buckeyes before returning to Maturi Pavilion on October 21st to face Wisconsin at 7:30 p.m. Both matches will be televised on the Big Ten Network.

The Gophers utilized five blocks to come back and win the first set, 25-23. Trailing 6-9, Minnesota tied up the set 10-10 after a scrappy back and forth rally that ended with a Hart kill. Iowa called a timeout as the Gophers held a 12-10, but tied up the set at 13-13. The two teams traded points until Iowa earned back-to-back points at the 16-18 mark as the Gophers called a timeout. Minnesota pulled within two, but called its timeout as the Gophers trailed, 19-22. A Samedy kill put Minnesota within one and Pittman made the game an even 23 with her fourth kill of the set as Iowa called its second timeout. Minnesota took the lead and closed out the first set with a block from Pittman and Jasmyn Martin.

Second Set: Iowa started to pull away from the 2-2 tie and went on a four point run that forced Minnesota to call a timeout at 2-6. Minnesota tied the set at 9-9 and took their first lead of the game after a block from Hart and Lohman. The Gophers rode Seliger-Swenson’s 10-point serve rotation run. In that span, the Gophers built an 18-9 lead and forced Iowa to use both of their timeouts. During the serving run, Lohman also had four blocks. Iowa was able to cut Minnesota’s lead to five at 20-15, but kills from Martin, Samedy, and Hart put the Gophers at 23-16. An ace from Barnes gave Minnesota set point and a kill from Pittman closed out the set to go up, 2-0.

Third Set: Minnesota and Iowa traded points until Minnesota took the lead for good at 8-6 en route to a 25-15 win. A five point run caused Iowa to call a timeout at 12-7. Minnesota brought the lead to six after an overpass kill from Pittman. During a Barnes serve rotation, the Gophers earned three-straight points and a 21-12 lead. Iowa burned its second timeout of the set at 20-12, but the Gophers built a 22-13 lead. Lohman added her ninth kill of the match at 23-15, while a Samedy block ended the match, her fourth of the game.

The University of Iowa volleyball team dropped a 3-0 decision to sixth-ranked Minnesota on Sunday afternoon at the Maturi Pavilion.

FIGHT FOR IOWA
After a career-high 29 digs at Indiana on Wednesday, Annika Olsen registered 21 digs at No. 6 Minnesota on Sunday. This is her 19th match of the season with double-digit digs.

HOW IT HAPPENED
Set 1 (23-25) | The score was knotted 19-19 after a back-and-forth start to the set when a kill by Brie Orr sparked three consecutive Iowa points, giving the Hawkeyes a 22-19 lead. Minnesota drew even at 23-23 before closing out the set win. The set featured nine ties and four lead changes.

Set 2 (18-25) | The Hawkeyes jumped out to an early 7-3 advantage, but the Golden Gophers responded, taking a 10-9 lead. From there, Minnesota continued its momentum and took control of the set. Iowa mounted a comeback, but Minnesota secured the set victory, extending the match lead to 2-0.

HEAR FROM COACH SHYMANSKY
“I thought we competed so well for the first set. We just need to close it out there at the end when we get the chance. I thought we carried that momentum over into the second set pretty well, but the wheels came off in one rotation. We gave up nine straight points. You can’t do that against any team. Whether you are playing the top team in the league or the bottom team, you are going to lose a set doing that, but I think what we really lost was our momentum.”

“Our passing was really out of sync today, especially as the match wore on. That happens on the road sometimes, and you really have to work together as a group when it does. The outside attacking game for us was decent. I was proud of our group. We set out to shut down Jasmyn Martin. That matchup last time really killed us, and she hit .000 today, so that was really good. But when you are a top five caliber team, you have other options. We didn’t get our back side swing going well enough, and some of that was because we had trouble passing. We keep looking for answers. We are using a lot of players in the lineup and subbing people in trying to give us a spark or ignite our team. In the end, we just kind of faltered and lost our mojo today.”

UP NEXT
The Hawkeyes return home Friday, hosting Illinois at 7 p.m. (CT). Iowa then squares off with Northwestern on Saturday in another 7 p.m. first serve.

The third winner of the moped sweepstakes will be announced Friday night. Fans can register for the moped until noon Tuesday at hawkeyesports.com.