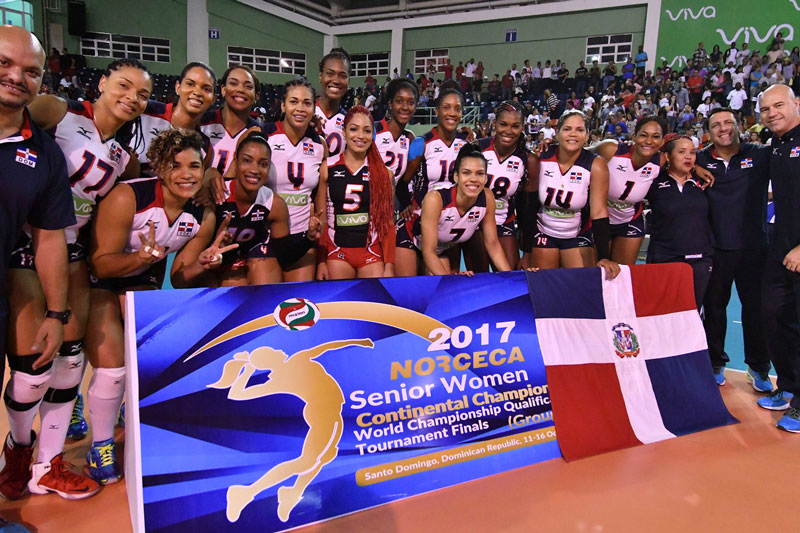 The Dominican Republic gave the home fans something to cheer about by winning Group A with a sweep of Puerto Rico in Sunday's finale.  Current Photo via NORCECA

The Dominican Republic gave the home fans something to cheer about by winning Group A with a sweep of Puerto Rico in Sunday’s finale. Both teams already qualified for the World Championships with 2-0 records in the tournament.

Guatemala took third place in the group with the sweep of Jamaica.

Annerys Vargas Valdez led the Dominicans at the net with six blocks to go with seven kills for a match-high 13 points in the win as the victors bested Puerto Rico 12-9 in stuffs.

Stephanie Enright served up three of Puerto Rico’s five aces, while also adding a team-best nine kills for 12 points. Daly Santana chipped in nine points, all on blocks, while Neira Ortiz added a nine-point effort with six kills, two blocks and an ace.

Beatriz Gomez Guzman Rut accounted for a match-high 17 points, including 14 kills, to lead Guatemala to victory.

“We achieved our objective and the girls executed the game we planned,” Guatemala coach William Fernandez said. “Our reception was steadier which allowed us to be effective in the attacks-This experience for sure will be of great for our preparation for the Central American Games in Nicaragua.”

In addition to Gomez’s 17 points, Guatemala was aided by 12 point performances by Blanca Recinos Ocana and Michelle Gonzalez Morales. Ocana notched 10 kills, a block and an ace, while Morales turned in six kills, a match-high four blocks and two aces.

Tahleia Bishop was the top scorer for Jamaica with 10 points, including nine kills and a block. Tasha-Gaye Richards was next with seven points, notching four blocks and three kills.