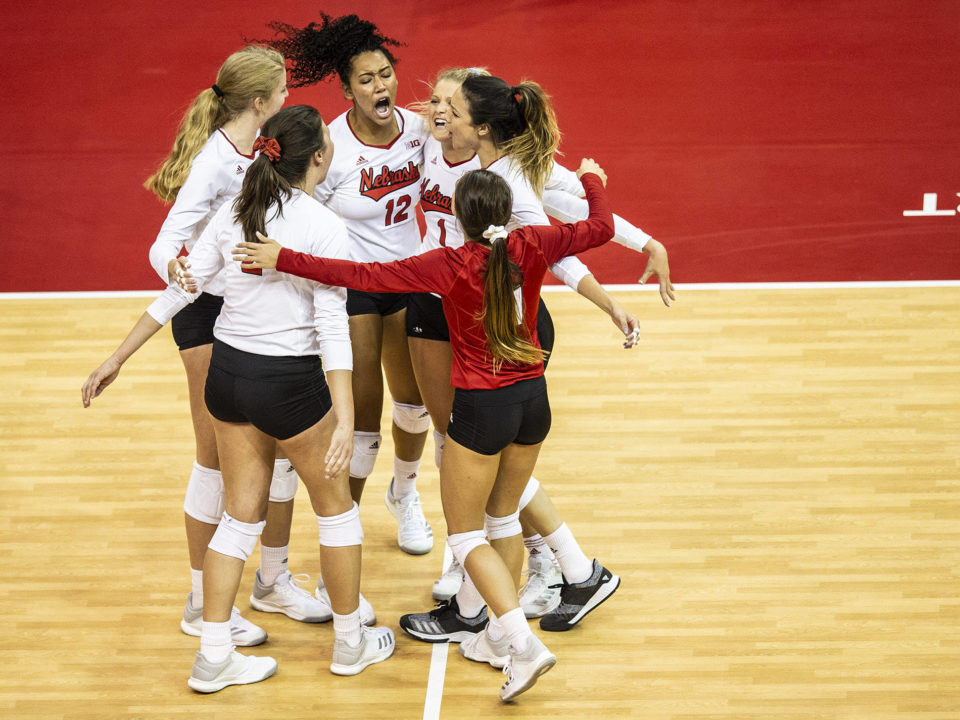 5th-ranked Nebraska put a stop to 19th-ranked Michigan’s perfect season Friday night, downing the Wolverines in 4 sets in Big Ten-opening action. The Huskers posted a .314 attack percentage and a dominant 14 blocks to earn the victory. Current Photo via Nebraska Athletics

5th-ranked Nebraska put a stop to 19th-ranked Michigan’s perfect season Friday night, downing the Wolverines in 4 sets in Big Ten-opening action. The Huskers posted a .314 attack percentage and a dominant 14 blocks to earn the victory.

In the first set, Nebraska came out swinging and pulled ahead 7-2 with 4 kills and a pair of service aces by Nicklin Hames. Though Michigan came back to tie the set midway through, the Huskers never surrendered their lead and secured the 25-19 win.

A total of 12 ties occurred in the second set, before the Wolverines could claim the result, 27-25, with back-to-back Carly Skjodt kills to even the match, 1-all.

A 6-0 serving run by Hames allowed Nebraska to distance itself from Michigan in the third set, 24-16. The Wolverines scored once more on an attack error before the Huskers earned the win at 25-17 on a Mikaela Foecke kill.

The Huskers carried the momentum into the fourth set, jumping out to a 9-3 lead early. Nebraska led by as many as 14 and hit at an efficient .467 clip to put the match away with a 25-12 closing victory.

Foecke had an impressive line for the Huskers with 21 kills, 9 digs, 6 blocks and a .391 attack percentage. Joining her with double-figure kills were Lexi Sun (14 kills, 16 digs) and Jazz Sweet (11). Hames posted 44 assists, 3 service aces and 10 digs for a double-double, while Callie Schwarzenbach notched 8 blocks.

Skjodt led Michigan with 13 kills on the night. MacKenzi Welsh recorded a double-double with 30 assists and 10 digs, while Jenna Lerg logged 20 digs.

The match was also a sibling rivalry, as Natalie Smith (Michigan) and Brooke Smith (Nebraska) battled it out on the court. Natalie is a sophomore and Brooke is a senior. Brooke will enjoy bragging rights after this matchup.