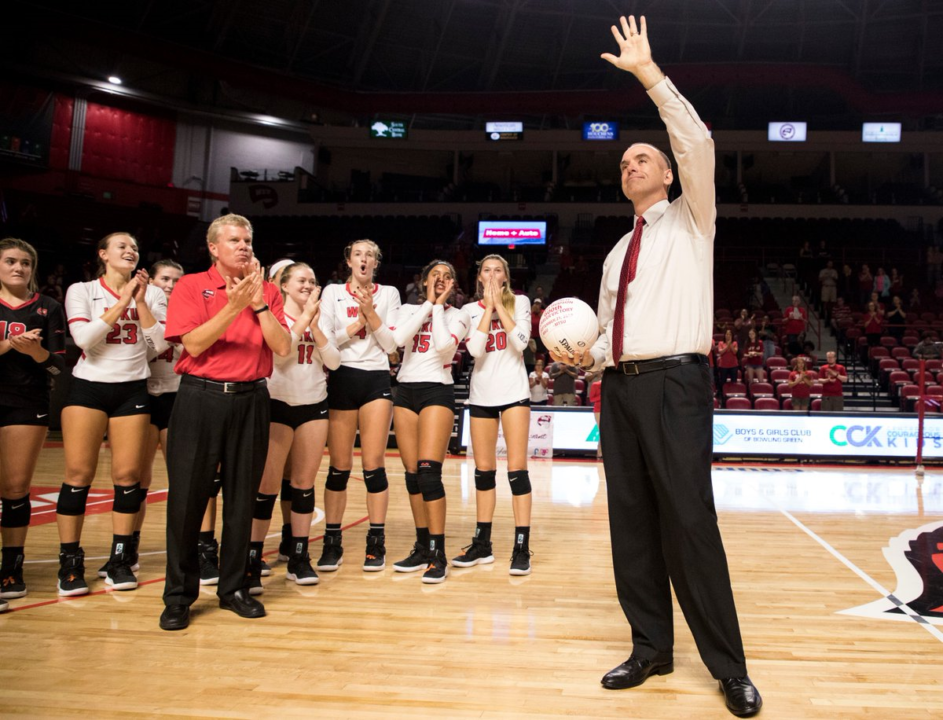 Western Kentucky defeated Middle Tennessee State via sweep on Friday night, but that was only part of the story. It was part homecoming, part celebration of life and accomplishments and all love for a coach who has spent his whole career on the sidelines in Bowling Green, Travis Hudson, who recorded his 600th career win. Current Photo via Western Kentucky Athletics

Western Kentucky defeated Middle Tennessee State via sweep on Friday night, but that was only part of the story. It was part homecoming, part celebration of life and accomplishments and all love for a coach who has spent his whole career on the sidelines in Bowling Green.

Alumna Alyssa Cavanaugh, who recently announced she is battling leukemia, was in the building to witness her head coach Travis Hudson reach his 600th victory and her Lady Topper team extend its home conference win streak to 56 matches dating to the 2011 Sun Belt Conference season.

Cavanaugh was a part of 123 of those victories in her WKU career and has been encouraged by the team’s push to win #124, her battle against cancer. The team even debuted new warmup T-shirts in her honor.

We'll be rocking some new warm-ups for the rest of the season ❤️ #Win124 #IBelieveInAlyssaCavanaugh pic.twitter.com/w36vBINdue

And Middle Tennessee wore orange ribbons on their shoes to support Cavanaugh’s fight.

The Blue Raiders showed their support for @cavanaugh7 and her fight against cancer with orange leukemia ribbons on their shoes in tonight’s match versus WKU.

But the special attire and Cavanaugh’s return were just the tip of the iceberg on a milestone evening.

“It was great to see Alyssa,” Hudson said. “It’s the highlight of my night to see her and to have her here on this night, when she was a part of so many of those wins. This all has been really special.”

Hudson, who suffered a widow maker heart attack in April, was reflective after the milestone win.

“It’s been a trying year for me and my family in a lot of ways and it’s nice to have a night where something good is going on. I’m just so blessed to have this life that I’ve lived and have been able to do it here in Bowling Green and at the school that I attended and call home. People have asked me a lot of times why I’ve chosen to stay here over the course of my career and it is nights like tonight that make me ask ‘why wouldn’t somebody?’”

With the victory, Hudson becomes just the 19th active Division I coach with 600 wins to his credit, the 58th in DI history and the first ever to do in Conference USA history.

In November, VolleyMob sat down with Coach Hudson to discuss his philosophy, his program and building the school into a mid-major powerhouse and national contender.

"People have asked me a lot of times why I've chosen to stay here over the course of my career and nights like tonight make me ask 'why wouldn't somebody stay?'" – @TravisHudsonWKU

Stanford coach Kevin Hambly, whose team had the night off from play, checked in to give his well wishes.

Travis – you inspire us all! https://t.co/Ku5Xh7eTwl