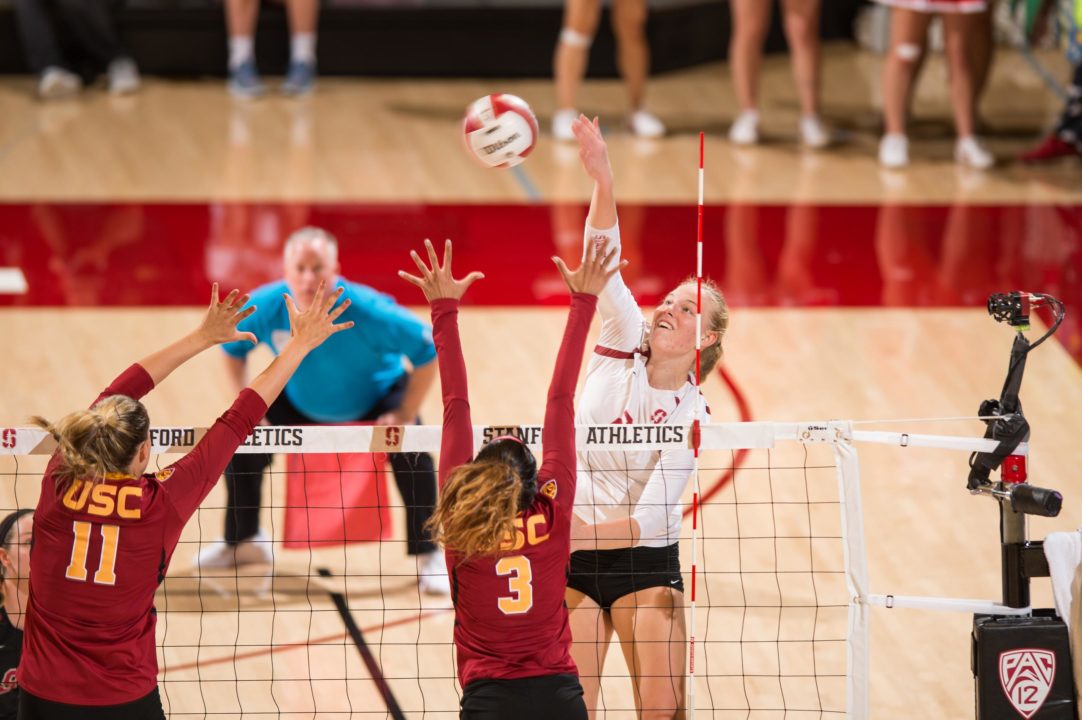 The #5 ranked Stanford Cardinal faced stiff competition as they traveled to Saint Mary’s to take on a motivated Gaels’ team. After two hard fought sets, the Cardinal were finally able to pull away in the third to pull out a straight set win behind 20 kills from Kathryn Plummer. Meghan McClure chipped in 9 kills and Jenna Gray dished out 43 assists for the Cardinal who outhit the Gaels .291 to .181 on the night. Stanford improved to 7-2 on the season, and opens Pac-12 play on September 20th when they host Cal.

Set one started with back and forth action until a 5-1 run highlighted by three kills from Plummer opened a 10-6 lead for the Cardinal. The lead reached 13-7 before Saint Mary’s went on a run, closing the lead to 17-16 (7-2 run) strong play from Sienna Young. The Gaels even took a brief lead but the Cardinal continued to feed Plummer and she delivered, finishing the set with 8 kills.

Three early kills from McClure opened up an early 9-5 lead for the Cardinal in set two. The Gaels rallied though, taking a 15-14 on an ace from Lindsey Knudsen and forcing Stanford to take their first timeout. Morgan Hughes collected back to back blocks as the Gaels opened a 20-18 lead, forcing the Cardinal to take their last timeout. However, the Cardinal rallied and tied the score at 21 on an ace from Plummer. The end of the set was a battle with each team trading points, but in the end, it was once again Plummer that finished the set on a kill.

Saint Mary’s started off set three strong and took an 8-6 lead on a Payton Rund block. Stanford rallied, taking a 9-8 lead on a Plummer kill. Back to back kills from Merete Lutz grew the lead to 13-10. Plummer’s 18th kill ballooned the lead to 16-11 and the rout was on. In fitting fashion, the match finished on another kill from Plummer.

Young and Lindsey Calvin lead the Gaels with 7 kills while Rund and Morgan Hughes chipped in 6. Saint Mary’s drops to 4-6 on the year and will return to the court on September 21st when they open West Coast Conference play on the road at Gonzaga.

Plummer hit .432 (20-4-37) while collecting seven digs, two blocks and an ace to lead the Cardinal. Freshman Meghan McClure turned in a solid all-around performance with nine kills, a career-high 11 digs, while matching her career-highs in blocks (3) and aces (3).

After a rough start offensively, Stanford (7-2) finished the match with a .291 attack percentage, including a .586 clip in the third set. The Cardinal held the Gaels (4-6) to a .181 hitting percentage.