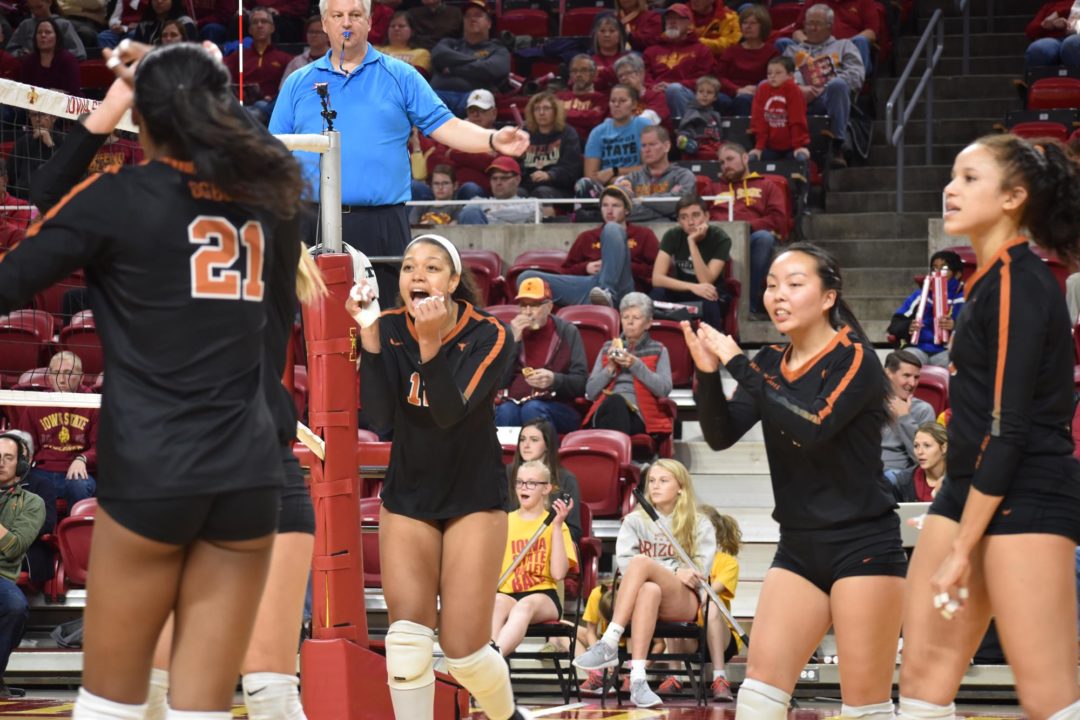 AMES, Iowa – No. 5 Texas remained undefeated in Big 12 action and extended its current win streak to 15 matches with a 3-1 road win over No. 20 Iowa State on Saturday.

Junior outside Jess Schaben and junior middle Grace Lazard managed double-digit kill nights for the Cyclones, turning in 12 and 11 respectively. Schaben rounded out a double-double with 12 digs, while Lazard put up a team-high four blocks. Redshirt sophomore libero Hali Hillegas led Iowa State from the backcourt and the service line, registering match highs of 31 digs and six aces.

The Longhorns hit .222 or better in each setter, rounding out the night with a .393 effort in Set 4. Texas had help from 25 Cyclone hitting errors, while committing just 14 of its own.

In Set 1, Texas snapped an 18-all tie with a 7-3 run, including three kills and a block by Ogbogu.

Texas led by as many as four in Set 3, but couldn’t hold on. Down 10-7, Iowa State mounted a comeback with four straight points, including two Hillegas aces. Later trailing 14-11, the Cyclones knotted the score at 16 en route to a 19-17 advantage. Two Izzy Enna aces and two Lazard putaways aided the rally. Texas led 22-21 prompting an ISU timeout and the Cyclones scored four of the next five out of the break, including a Hillegas ace and a kill and a block each by Lazard and Samara West, to take the 25-23 win.

Iowa State used a 4-0 midset run to grab a 12-11 lead as Hillgas managed another perfect serve. Texas countered with 11 of the next 14 points to surge ahead 22-15. Ogbogu turned in four kills, a block and an ace in the stretch. An Ebony Nwanebu kill eventually clinched the 25-18 win  and the match.

UT finished with a 12.0 to 6.0 blocking advantage over Iowa State and limited the Cyclones to a .141 hitting percentage.

Opening the match 3-0, Texas sustained the initial advantage until the Cyclones tied the score at 12-12. The two teams exchanged attacks, tying the score three more times before a block by White and Ogbogu put Texas ahead by three once more at 21-18. The lead gave Texas room on the scoreboard to secure the set, enabling Shook to convert set point with a kill, 25-21.

Iowa State took its first timeout of the second set at 9-7 after a 3-0 scoring run for Texas.

The Cyclones had been preventing the Longhorns from growing a lead, but the Texas block, combined with kills from White, pulled Texas to a five-point lead at 20-15. It was a six-point lead on set point at 24-18, before Sun’s eighth kill gave the Longhorns a 2-0 match lead, 25-18.

White, leading Texas in kills, recorded her tenth as the Longhorns jumped out to a 5-2 lead opening the third set. Texas maintained a slim advantage, but fell behind at 21-20 before the Cyclones gained set point at 24-22. A kill from Sun saved one, but Iowa State senior Monique Harris found the back corner to get the Cyclones on the board at a 2-1 match score, 25-23.

The fourth set opened up for Texas with a 4-0 scoring run that took the Longhorns to an 18-14 lead. After Sun highlighted a 4-0 scoring run by executing a tip into center-court, Texas rode another run, 7-4, to secure the match with a 25-18 finish for the set.

The Longhorns move on to a matchup with No. 11 Kansas at Gregory Gym on Wednesday, Nov. 15 at 7 p.m. The match will be broadcast live on Longhorn Network.

The Cyclone effort was led by an impressive evening from Hali Hillegas, as the Cyclone libero finished with 31 digs and a career-best six aces, the most by a Cyclone since Erin Boeve got six at Colorado in 2007. ISU got double-doubles from Monique Harris (14 assists, 12 digs) and Jess Schaben (12 kills, 12 digs).

First Set: Texas 25 Iowa State 21
The Horns took the first three points of the first set to get the early advantage. The Cyclones chipped away at the UT advantage, eventually tying the set at 12-12 on an Alexis Conaway kill, and getting ahead at 14-13 on a kill from Jess Schaben. However, ISU’s lead never made it over one point as Texas eventually went on a 5-1 run to pull ahead for good at 23-19. Texas took the first set when Ashley Shook dumped one over the Cyclone block at 25-21 UT.

Second Set: Texas 25 Iowa State 18
Iowa State moved ahead early in the second set, using a 4-0 run capped by a Hali Hillegas ace to get ahead 5-3. The lead was short lived, as UT went on a 5-0 run to get back ahead 11-7. ISU made a couple of runs to reel back the Horns back in, cutting the UT lead to 14-13 and 17-15, but the Cyclones were not able to make the next step to get back into the frame. The Horns made the match 2-0 when Lexi Sun moved to the middle for a kill at 25-18 Longhorns.

Third Set: Iowa State 25 Texas 23
Texas used an early 5-1 run to get ahead 7-3, but the Cyclones battled back from behind the service line, with Hali Hillegas getting back-to-back aces to knot the set back up at 10-10, and Samara West hit one off the block to move ahead 11-10. After falling behind 14-11, Izzy Enna got a pair of aces to help knot it back up at 14-14. The Cyclones eventually were the beneficiaries of a pair of UT attack errors to move -ahead 19-17, and made their way to set point on a block by Grace Lazard and Samara West at 24-22. Lazard followed that up with a kill to give the Cyclones the set at 25-23.

Fourth Set: Texas 25 Iowa State 18
A tight fourth set, which featured nine ties, three lead changes and two more Hillegas aces through 28 points, was broken open at the halfway point by the Longhorns. Tied 14-14, Texas found Chiaka Ogobogu for three-straight kills to push the visitors ahead 17-14. UT carried the set from there, hitting .393 for the set. The Longhorns wrapped up the match when Ebony Nwanebu put away a kill at 25-18, UT.

Up Next
Iowa State is back on the road to take on Oklahoma on Wednesday. First serve between the Cyclones and Sooners will be at 7 p.m. in Norman.