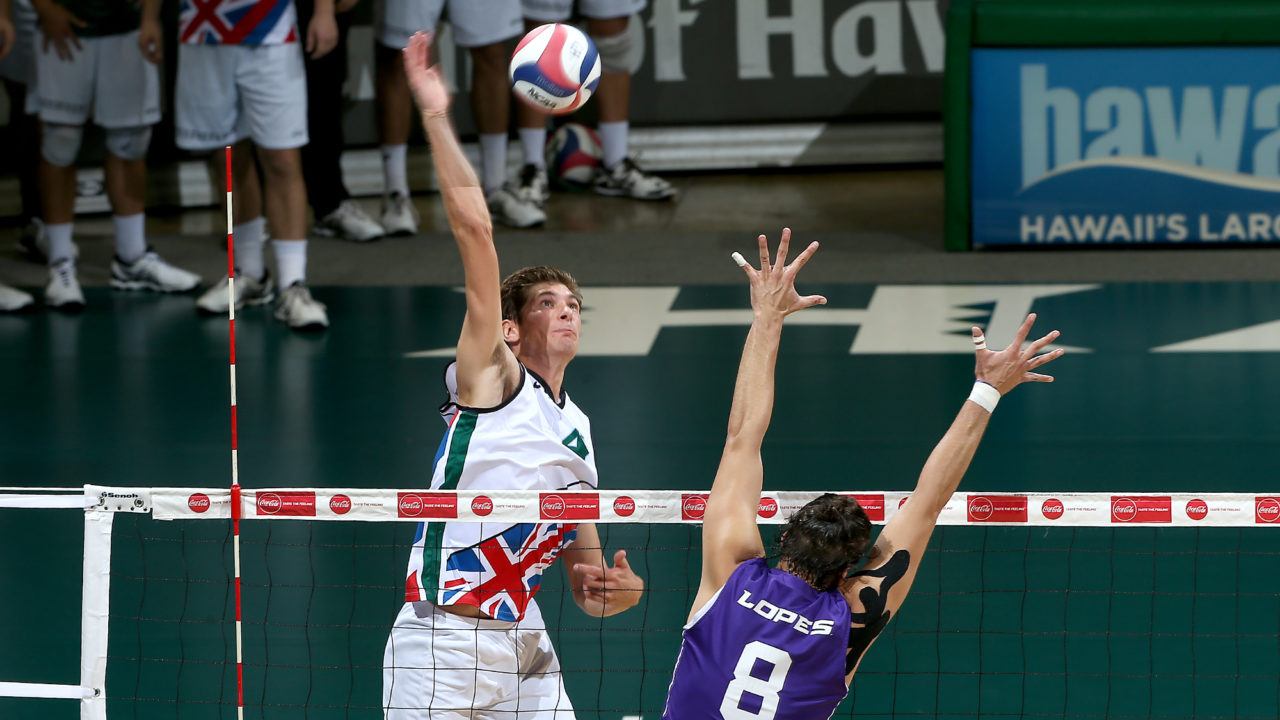 Hawaii's Stijn van Tilburg put up double-digit kills for the 3rd time in as many games as Hawaii swept Grand Canyon on Friday. Archive Photo via Hawaii Athletics

The Hawaii Rainbow Warriors swept Grand Canyon University 3-0 in front of a big home crowd on Friday. Attendance for Friday’s game swelled to 3,129 – about 300 more than saw Hawaii’s first win over GCU in game one of the two-match series.

The defending VolleyMob National Player of the Week Stijn van Tilburg led the way with 17 kills and a .536 hitting percentage in the game. Van Tilburg was off to a slow start early in the season, but has exploded in the last 3 games for 18, 15, and 17 kills, respectively, in just 10 total sets played. His hitting percentage this season of .344 is almost 100 points higher than the .255 he hit for last year, and his kills-per-set average is 4.42 – among the top 6 nationally, and a full kill better than he did last year in his freshman campaign.

Hawaii continues to serve and receive very well this season. On Friday, they had just 11 service errors and 5 aces, while committing no receiving errors (and thusly allowing no aces) for the first time this season. After a dominant 3-0 sweep against Grand Canyon on Wednesday, the home team got even better on Friday, improving in their serving, receiving, and jumping their hitting percentage from .304 to .375.

GCU’s top offensive player was Shalev Saada, who had 9 kills on a .263 hitting percentage, and also chipped in 2 blocks and 5 digs.

After 5 games this season, Hawaii has only ceded 1 set, to Ball State. This is the team’s best start since 2003 and extends a 9-game home winning streak. They will face their first big test next week, though, as they travel to the mainland for a two-game series against MPSF opponents and national #3 Long Beach State on Wednesday and Friday.

HONOLULU—The University of Hawai’i men’s volleyball team (5-0, 0-0 MPSF) overpowered Grand Canyon in a three-set sweep on Friday night, 25-16, 25-16, 25-20. Stijn van Tilburg led the Rainbow Warriors with 17 kills while Austin Mautautia added seven in front of 3,129 at the Stan Sheriff Center. Hawai’i is off to a 5-0 start for the first time since 2003 en route to 24-6 campaign. The ‘Bows also raised their home win streak to nine-straight matches dating back to last season and they have run their streak of 17-consecutive wins over non-MPSF teams dating back to 2014.

The Rainbow Warriors went on a 7-2 run in the middle of the frame and then pulled away to capture the first set, 25-16. Van Tilburg had five kills and Patrick Gasman had four kills on five swings to lead UH.

Hawai’i went up 2-0 after winning the second set, 25-16. The Rainbow Warriors jumped out to an early 4-0 lead with Franciskovic behind the service line and never looked back. The ‘Bows built their lead to as many as nine points late in the frame.

The third frame was tightly contested with both teams tying 11 times. But, with the score tied at 20-20, UH closed out the set winning the last five-straight points off a Brett Rosenmeier serving run.I

n 2003, UH won their first four matches but fell in the final game of the Outrigger Hotels Invitational to Shanghai Oriental in an exhibition game. Hawai’i then won their fifth official match over Stanford to start the season. In 1996, the Rainbow Warriors won their first 13-straight-matches. That season the ‘Bows went on to post a 27-3 overall record while going 19-0 in the MPSF. Hawai’i fell to UCLA in the NCAA Championship match in Los Angeles to end the season.

The Rainbow Warriors will head to California to begin Mountain Pacific Sports Federation action in a pair of matches at Long Beach State on Jan. 18 and 20 plus a single match at UC Irvine on Jan. 21.

HONOLULU – The GCU men’s volleyball team was defeated by the No. 6 Hawai’i Rainbow Warriors on Friday night. Hawai’i took the match in straight sets by scores of 25-16, 25-16, and 25-20. Grand Canyon’s record falls to 1-3 for the season while Hawai’i remains undefeated at 5-0.

The Lopes were led by outside hitter Shalev Saada. Saada tallied nine kills and five digs to lead GCU in both categories. Will Schwob added six kills and three digs for the match and libero Sky Engleman also recorded five digs.

After playing three competitive sets on Wednesday evening, GCU was unable to reach the same level of intensity in the second matchup. The Lopes fell behind early in all three sets and were unable to recover due to errors and efficient play by the Rainbow Warriors. Hawai’i had an impressive night offensively, knocking down 43 kills with only 13 errors.

Blocking was a strong suit for GCU during the contest. The Lopes notched seven team blocks and four different players had two blocks. Middle hitters Ashton King and Drew Silbernagel each had two in addition to setter Michael Milstein and Saada.

Next up, the Lopes will return to the mainland for their home opener against Lindenwood on Friday, Jan. 20. GCU will again face off with Lindenwood on Saturday, Jan. 21. Both contests will be played in Antelope Gymnasium and begin at 6 p.m. MST.