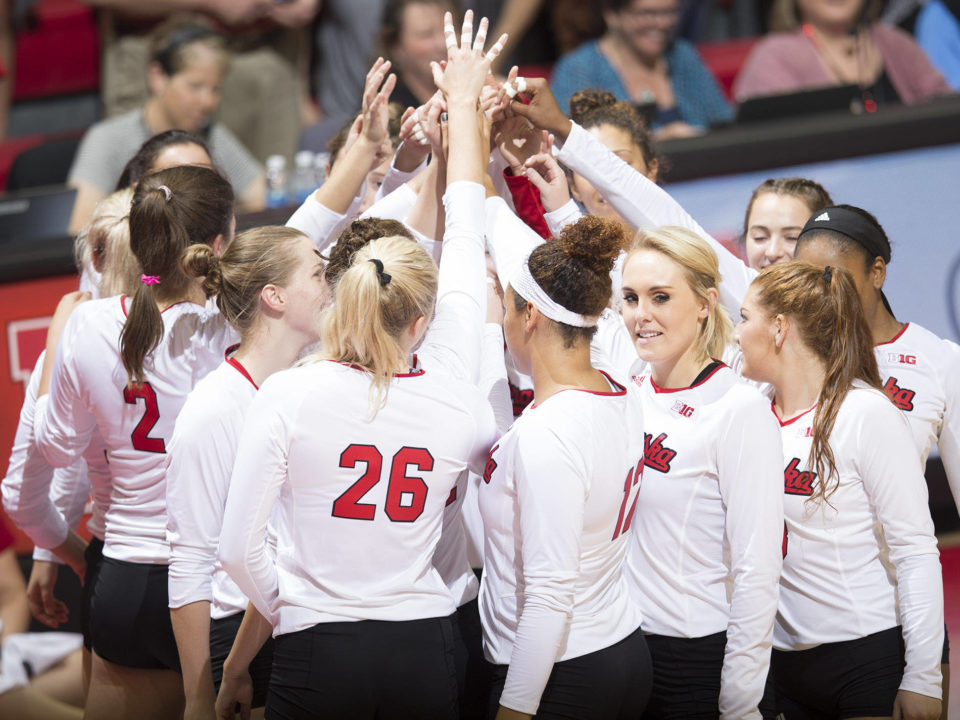 #6 Nebraska made quick work of Maryland Wednesday night in a sweep in Big Ten play. Current Photo via Nebraska Athletics

LINCOLN, Neb. – The #6 Huskers used 10 aces in their match with Maryland to remove all doubt about conference superiority in a sweep of the Terps, 3-0 (25-11, 25-15, 25-16). Additionally, Nebraska hit .406 on the match, which was the Huskers second-highest hitting percentage on the season and the highest in Big Ten conference play. The win, coupled with Penn State’s win at Iowa Wednesday night, keep both the Huskers and the Nittany Lions tied atop the Big Ten Conference at 14-1 each.

Nebraska was led by Lauren Stivrins, who had match-highs of 9 kills, 3 blocks and a hitting percentage of .636 on the night. The well-balanced offense had additional contributors from Mikaela Foecke and Annika Albrecht with 8 kills each. Briana Holman added 7 kills and hit .545 for the match. Setter Kelly Hunter dished 34 assists and served a career-high 4 aces. Kenzie Maloney also had a career night with 3 aces of her own.

Wednesday night, the Terps played their fourth-straight ranked opponent and their third-straight top-10 opponent on the road. Maryland’s freshmen, however, were undeterred. Freshman opposite Samantha Drechsel had a match-high-tying 9 kills on .333 hitting. Freshmen Jada Gardner and Erika Pritchard led the defense at the net with 3 blocks each. Freshman libero Samantha Burgio finished with a team-high 7 digs.

The Huskers (21-4, 14-1 Big Ten) served a season-high 10 aces to thwart the Terrapins (16-11, 5-10 Big Ten). Nebraska outhit Maryland .406 to .081. It was the second-best hitting performance of the season for the Huskers and their best in Big Ten action. Nebraska has now won 26 straight matches at the Devaney Center, the longest active streak in NCAA Division I.

Lauren Stivrins led the Huskers with nine kills on a career-high .636 hitting percentage, and she had a team-best three blocks. Mikaela Foecke had eight kills and nine digs, and Annika Albrecht had eight kills. Briana Holman added seven kills, as the Husker middle blockers combined for 16 kills on .591 hitting.

Kelly Hunter paced the Huskers with 34 assists and served a career-high four aces to lead NU’s effort at the service line. Kenzie Maloney served a career-best three aces and had seven digs. The Huskers had a 36-19 advantage in digs and 38-25 edge in kills.

Set 1: The Huskers got kills from five different players, and Hunter Atherton and Sydney Townsend each served aces, as Nebraska rolled to a 12-4 lead. The Huskers continued to assert their authority as Hunter served NU’s third ace and Jazz Sweet terminated for an 18-7 lead. NU cruised to the 25-11 win with a .571 hitting percentage. Foecke, Albrecht and Stivrins each had three kills.

Set 2: Maryland scored the first two points and then held the lead throughout the early portion of the set, going up by as many as four at 10-6. But at that point Nebraska reeled off an 8-0 run on Hayley Densberger’s serve to take a 14-10 lead. The Huskers later extended the lead to 20-13 as part of a 4-0 run with Foecke serving. Nebraska won 25-15, finishing the set on a 19-5 run.

Set 3: Nebraska wasted no time in taking control of the third set, jumping out to a 7-1 lead with Foecke and Holman combining for three kills and Hunter serving her third and fourth aces of the night. Maryland got back within 12-8, but the Huskers pulled ahead 16-10 after a kill by Holman and a Terrapin hitting error. The Huskers finished off the sweep, 25-16.

The Huskers were the fourth straight ranked opponent for the Terps and the third straight top-10 opponent Maryland has faced on the road.

Nebraska set the tone from the service line, notching 10 service aces against the Terps.

Nebraska took a quick 10-4 advantage in the first set. Pritchard and Drechsel notched kills before the Huskers had a 5-1 run. Strong serving from Drechsel helped Maryland string together three straight points, but Nebraska used a 5-0 run to end the set, 25-11.

A Pritchard solo block and a Drechsel kill helped Maryland to a 4-2 lead to start the second. A pair of kills from Angel Gaskinhelped the Terps increase to 8-5. After back-to-back Drechsel kills, Nebraska went on an 8-0 to go ahead 14-10. Gardner posted an overpass kill to pull within two, 14-12, and she stopped a 4-0 Husker run with another at 20-14. Gardner and Gia Milana combined for a kill at 23-15, but Nebraska closed the set, 25-15.

After the Huskers took another early lead, Pritchard and Gardner combined for a pair of blocks at 9-4. Kills from Milana and Drechsel put Maryland within four, 14-10, but the Huskers increased their lead to 20-12. With Nebraska at match point, the Terps posted three straight points, including kills from Hailey Murray and Gaskin, to extend the set, but Huskers finished it, 25-16.