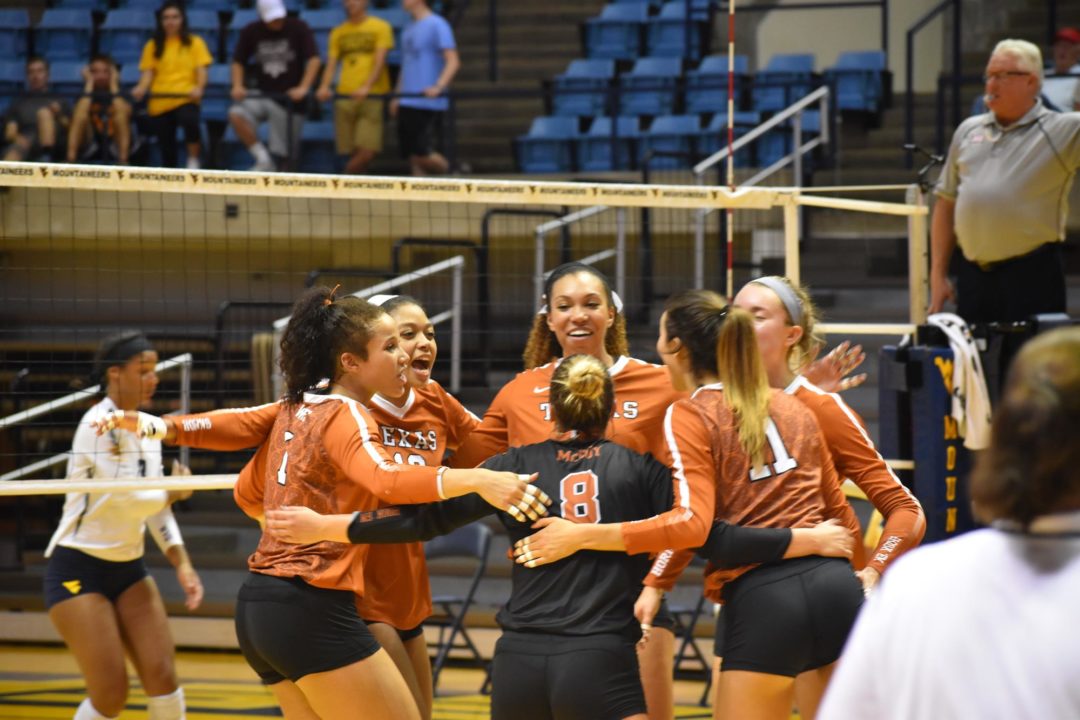 No. 6 Texas had to come back and win the final two stanzas to escape West Virginia with a Big 12 victory, surviving in five sets. Current Photo via Texas Athletics

MORGANTOWN, W.V. – No. 6 Texas had to come back and win the final two stanzas to escape West Virginia with a Big 12 victory, surviving in five sets.

West Virginia had the upper hand in the decisive fifth set, jumping ahead 9-4 with help from a trio of putaways by sophomore outside hitter Payton Caffrey and two each by sophomore right side Natania Levak and sophomore outside Katelyn Evans. Texas turned the tables by scoring nine of the next 10 points. Two kills by freshman outside Lexi Sun and a pair of blocks by senior outside Ebony Nwanebu and junior middle blocker Morgan Johnson aided the comeback effort and gave Texas a 12-10 advantage. A kill by senior outside Morgan Montgomery slowed the Longhorns momentarily, but a Nwanebu answered and a WVU hitting error put the visitors on the hill at 14-11. A Mountaineer block stopped Texas on its first match-point try, but a service error spelled the end of the contest.

The Longhorns outhit the Mountaineers .304 to .210 and outblocked them 14-8 in a match that came down to the wire. WVU edged Texas 67-66 in kills, while both teams managed four aces.

Sophomore outside Micaya White led Texas with a 16-kill, 15-dig double-double, while Sun and senior middle Chiaka Ogbogu chipped in 13 kills apiece. Ogbogu hit at a team-best .619 clip, with 21 errorless swings, while Sun rounded out a double-double with 11 digs and added six blocks. Johnson tallied a team-best 10 stuffs to lead the Longhorns at the net, while senior libero Cat McCoy pulled up a team-leading 16 digs. White (15), Sun (11) and freshman setter Ashley Shook (10) followed with double-digit dig tallies. Shook finished out the team’s third double-double of the night with 53 assists.

Caffrey led all hitters with 21 kills to go with 15 digs and four aces, while three others turned in double-digit kill efforts for the Mountaineers. Evans (16), senior middle Mia Swanegan (13) and Levak (11) made up the group. Swanegan hit at a team-best .409 clip, while notching four blocks alongside Levak and freshman middle Katie DeMeo. In the backcourt, freshman libero Alexa Hasting led the way with 17 digs followed by Caffrey.

Texas built a 10-5 lead in Set 1 as five players chipped in kills and WVU committed three erorors. Caffrey notched a pair of kills to cut the margin to two at 12-10. Kills by Ogbogu, Sun and Yaazie Bedart-Ghani upped the margin to five at 17-12. The Mountaineers countered with a a 6-1 run to knot the score at 18, thanks to a trio of Longhorn errors. After a tie at 19, Texas scored four of the next five to make it 23-20 and a Sun putaway put the Longhorns on the hill at 24-22. A kill and an ace by Caffrey kept WVU alive and a Swanegan kill denied a third Texas set-point try at 25-24. White and Sun, however, ended the stanza at 27-25.

After trailing 6-4, West Virginia took over Set 2 with an 8-0 run, featuring two Caffrey aces, two Swanegan kills and three Texas miscues. The Longhorns were within one at 13-12 as White downed three kills in a 6-1 run, then a Bedart-Ghani kill knotted the score at 16 soon after. The teams tied at 20, 21 and 22, until kills by DeMeo and Swanegan gave the Mountaineers a 24-22 edge. A stuff by Levak and Swanegan capped the 25-23 WVU victory.

The teams played to a 9-all tie in Set 3 before Texas grabbed a 12-9 lead. West Virginia used four-straight points, including kills by Swanegan, Erin Slinde and Caffrey to earn its first lead of the set at 13-12. A Sun kill tied the score at 13, sparking a string of five ties, last at 17. WVU went up 20-17 on a Longhorn error, taking a lead it would not relinguish. Texas cut the margin to one three times, last at 22-21, but a stuff by Evans and DeMeo and a pair of Caffrey putdowns gave the Mountaineers a 2-1 lead in the match.

Texas snapped a 5-5 tie in Set 4 with a 7-1 run, including five WVU errors. The Mountaineers scored four of the next five, with two Evans kills, to make it a three-point game at 13-10, but could not hold the Longhorns down for long. Texas responded with a 5-0 run of its own as White turned in three kills. The lead surged to 10 at 22-12 on an Autumn Rounsaville ace. Down 24-14, a pair of Evans kills kept West Virginia in the game at 24-16, before Sun sent the match to a decisive fifth set.