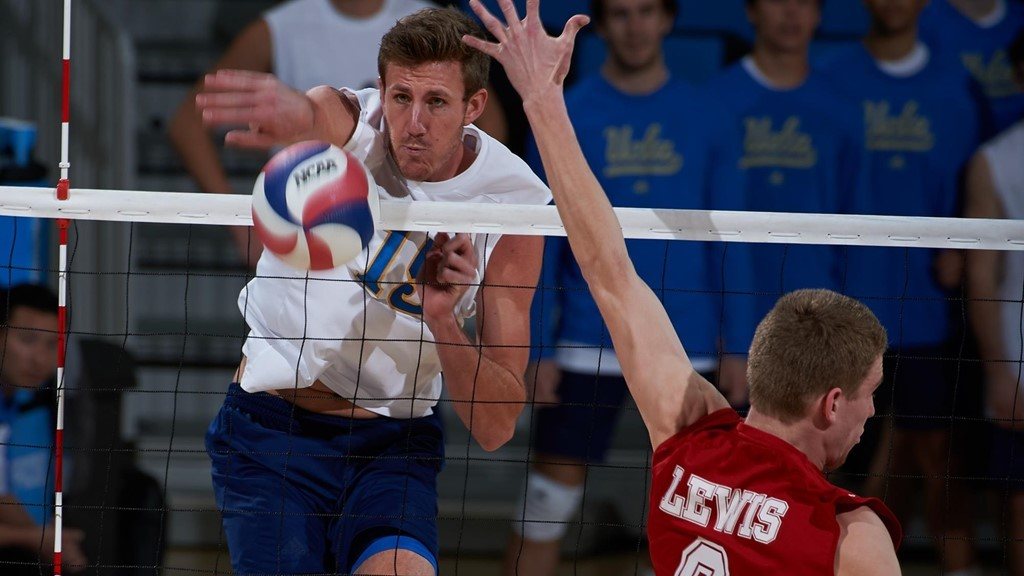 The 6th-ranked UCLA Bruins, finally healthy again, have been on a roll, winning 5 straight games after a February swoon that saw them lose 6 of 7. That included their latest conquest of Concordia Irvine on Saturday at home.

UCLA dominated statistically overall, but Concordia took their shots at the right moments to force the game to 5 sets.

Both teams came out swinging, with UCLA hitting .577 in the first and Concordia .318. But it was Concordia who kept that momentum into the second and 3rd sets, where they outhit the Bruins twice.

UCLA got back on track both offensively and defensively in set 4, however, hitting .480 and limiting Concordia to just 8 kills and 6 errors (.069).

Concordia jumped out to an early lead in the final set, but from there-on it was all Bruins, who at one point ran of 6-straight points to put the game out of reach thanks to 4-straight hitting errors from Concordia.

UCLA got 17 kills from Jake Arnitz on .464 hitting, but he was blanked in the UCLA’s offensive low point in the 3rd set. He also had 6 blocks and 6 digs in the game

Dylan Missry had 14 and JT Hatch had 5 in just 3 sets of play as UCLA contiinues to ease him back from injury. He hasn’t played in more than 3 sets in a game since mid-February.

Concordia got 14 from Ryan Anselmo and 11 from Joseph Pillon.

UCLA is now off for a 10 day final exam break until March 29th when they play cross-town rivals USC.

No. 6 UCLA went the distance and rallied to take a five-set win over Concordia, Irvine in a non-league match played on Saturday night in the Wooden Center. Scores of the contest were 25-22, 23-25, 23-25, 25-16, 15-9. Junior Jake Arnitz led UCLA with 17 kills and a season-high six block assists. Soph Dylan Missry joined Arnitz in double digits kills with 14 and added three aces. UCLA hit .349 for the match and won the serving battle, 7-2 and out blocked the Eagles 16.5 (season-high) to 10.5. The Bruins are now 15-7 on the season and will take next week off for exams before returning to the court on Mar. 29 at USC.

The Bruins were forced to rally from a 1-4 deficit at the beginning of set five. UCLA pulled even at five-all after an Eagle error and the score was level again at points six and seven before the home team took an 8-7 edge at the court change on an Arnitz kill. He followed up with another kill for a 9-7 lead and then teamed with Mitch Stahl on three straight blocks to lift the Bruins into a 13-7 advantage. Jackson Bantle delivered a kill to set up match point at 14-9 and Missry ended the match on a block solo.

Service errors plagued the Bruins in sets two and three. In set three, UCLA fell behind 3-8 early before coming back to even the score at 10 after JT Hatch hit off hands. A Missry ace sent the Bruins into the lead at 11-10, but it was the last of the set for the home team. Concordia pulled out to a 20-24 lead before Hatch helped serve the Bruins back into the set. UCLA saved three set points but could not complete the comeback, falling 23-25 after hitting just .179. In set two, Concordia broke a 14-all tie with three quick points. UCLA moved to within one point several times but could not grab the lead. Kills by Daenan Gyimah and Arnitz tied the score at 23, but the Eagles tallied the next two points for the win.

UCLA started off strong in set one, jumping to an 8-4 edge. Concordia closed to 15-13, but the Bruins answered with an Arnitz kill and a block by Missry and Gyimah. The Eagles moved back to within two at 18-16, 20-18 and 22-20. Christian Hessenauer and Gyimah teamed up for a block to make it 24-21. Hessenauer’s fifth kill of the set gave the Bruins the win at 25-22.

The Eagles battled with UCLA Saturday night, but fell to the Bruins in five sets. After dropping set one, the Eagles came back to take sets two and three. Although Concordia ultimately lost the match, the team showed the competitiveness it will bring to the MPFS when they officially join next year.

Ryan Anselmo led the team with 14 kills on 31 total attacks and a .226 hitting percentage. Joey Pillon put away 11 with six digs and an ace. Chandler Gibb had 39 assists, five digs and was in on two blocks. Hunter Howell hit .556 on five kills with zero errors. He also had four block assists and one solo block. Andrew Hammer hit .227 with nine put aways and four digs. Libero Jacob Weiser led the defense with seven digs.

The Bruins took set one 25-22, but the pressure Concordia applied in game one carried into the second set.

Gibb opened up game two with an ace and a Bruin error gave them the 2-0 start. The teams traded points until the game was tied at 23-23. Anselmo buried a set from Gibb to get the Eagles set point. Taylor Falduti went back to serve and a block from Pillon and Hunter ended the set.

The Eagles utilized strong side out volleyball and took advantage of the UCLA errors to win game two. Concordia extended their lead to three on a kill from Howell, but the Bruins made the score 21-19 with a kill of their own. Another UCLA mistake and a kill from Hammer gave the Eagles a 23-19 lead. After a Bruin serving error, the Eagles possessed a 24-20 lead. The Bruins weren’t ready to quit and went on a three-point run. Falduti finished the game 25-23 with a kill from the middle.

In game four, the Bruins cut down on unforced errors and began to build a lead. While the game remained close initially, they captured the fourth 25-16.

At the start of set five, it seemed the Eagles were on track to upset the Bruins. They charged to a 3-0 lead with two of the three points from coming Pillon. UCLA called a time out and won the next point. Ryan Anselmo came through next with a kill to give the Eagles a 4-1 lead in the game to 15. At 5-2, the Bruins forged a four-point run to steal the lead at 6-5. After tying it up at seven, the Bruins took a six-point run to go up 13-7. UCLA gave the Eagles their next two points on attacking errors, but a big Bruin kill gave them match point. The Bruins took set five 15-9.

Concordia is now 16-9 on the year. Their next match is March 24th against the USC Trojans in Los Angeles, Calif. First serve is scheduled for 7 p.m.