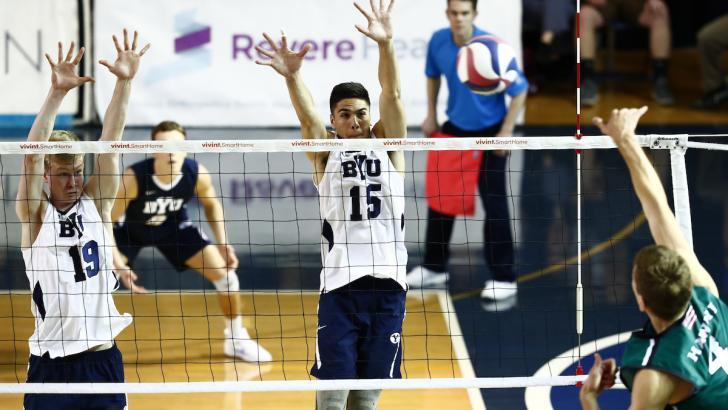 Once again, blocking was the difference-maker as BYU swept Hawaii for the second time in as many days. The cougars rolled up 14 blocks to Hawaii's 4 in a 3-0 rout. Archive Photo via BYU Photo

Once again, blocking was the difference-maker as BYU swept Hawaii for the second time in as many days. The cougars rolled up 14 blocks to Hawaii’s 4 in a 3-0 rout.

Stijn van Tilburg was unstoppable for Hawaii, which improved its hitting percentage from a rough .188 on Friday night to .264 on Saturday. Van Tilburg had 17 kills to lead all players.

“I thought our guys’ approach tonight was strong,” BYU head coach Shawn Olmstead said. “I’m really proud of them for being calm and scoring points when they needed it. It solidifies a lot of their work and with a win over a team like Hawai’i, they’ll continue to grow and take confidence into the next match. We’re just going to keep focusing on getting better. I feel like we’re making strides, especially in blocking.”

Senior Jake Langlois contributed 12 kills and six blocks while junior Brenden Sander recorded 12 kills of his own. Tim Dobbert was the third player to post double-digit kills as he finished with 11 kills and seven digs. Jauhiainen set the defense with a career-high eight blocks as BYU (19-2, 13-1 Mountain Pacific Sports Federation) had a season-high 14 blocks in the win.

Back-to-back Hawai’i (20-4, 10-4 MPSF) errors gave BYU a 6-4 lead at the beginning of the first set. The Cougars continued to pull ahead as a Sander service ace extended the advantage 12-7, forcing the Rainbow Warriors to take a timeout. BYU fed off momentum from a Langlois kill to go on a 6-1 run and put the Cougars up 18-9. Hawai’i answered with the next three points to chip away at the lead, but it wasn’t enough as BYU won the set 25-19 on a Langlois kill.

A dominating Sander kill kicked off the second set before the Rainbow Warriors countered with a trio of kills. Hawai’i scored six of the next nine points to extend its lead 9-6. BYU closed the gap, 11-10, on a Langlois service ace, but the Rainbow Warriors jumped ahead and maintained a four-point edge. A Sikes to Langlois kill cut the deficit 19-17 before BYU rallied to come back and tie the match 23-all. A Hawai’i attack error capped off the Cougars’ 7-1 run to take the second set 25-23.

Sander and Joseph Grosh teamed up for a block as the Cougars led 5-3 to open the third set. The Rainbow Warriors notched a pair of kills to tie the set 7 apiece before BYU pulled ahead 13-10 on a Jauhiainen service ace. The Cougars led by as many as five before Hawai’i fought back with a 6-0 run to take the lead, 20-19. A Dobbert kill put BYU back in play as the Cougars tied the match 22-all. Both teams battled back and forth to send the set into extra points before Langlois and Jauhiainen teamed up for the match-winning block as BYU won 28-26.

Next up for BYU is Princeton on Tuesday, March 21, at 7 p.m. MDT at the Smith Fieldhouse. The match will be broadcast on BYUtv and simulcast on BYU Radio – Sirius XM 143.

PROVO, Utah – The University of Hawai’i men’s volleyball team fell to No. 3 BYU for the second consecutive night, Saturday in a Mountain Pacific Sports Federation rematch at Smith Fieldhouse. Set scores were 25-19, 25-23, 28-26.

UH’s struggles in Provo continued, as the Rainbow Warriors (20-4, 10-4 MPSF) dropped their 15thstraight match to the Cougars in Smith Fieldhouse. Hawai’i is 3-25 all-time against BYU in Provo.

Hawai’i was led for the second straight match by Stijn van Tilburg, who posted a match-high 17 kills along with one ace, five digs, and one block. Freshman outside hitter Austin Matautia came off the bench and added nine kills, hitting .428 while outside hitter Brett Rosenmeier posted seven kills and eight digs.

UH fell behind 12-7 in Set 1 after three Cougars blocks and five Warrior service errors. Hawai’i got within four at 23-19 but BYU closed out the set with kills by Dobbert and Langlois. Van Tilburg led UH with five kills.

The Warriors came out much more aggressively in Set 2, taking a 6-3 lead. UH maintained its lead throughout with the help of five service aces in the set, including a pair by Hendrik Mol. Hawai’i led 22-18 after a kill by Rosenmeier before the wheels fell off.

A three-point BYU spurt trimmed the UH lead to one at 22-21. After an attack error by Dobbert, the Warriors mishandled a BYU overpass. Sander followed with back-to-back kills and Matautia hit long on set point. In all, the Cougars used a 7-1 run to finish the set.

The teams battled back-and-forth in Set 3 until Jauhiainen’s ace put the Cougars on top 13-10. BYU extended the lead to five at 18-13 after an ace by Joseph Grosh. UH showed some life with a 6-0 run to take a 20-19 lead, which included three kills by van Tilburg.

UH led 22-20 after a pair of Cougar hitting errors. BYU answered with a 4-1 run to reach match point. Van Tilburg erased two of those while Matautia staved off another before the Cougars put a stamp on the match with a block of van Tilburg.

The Warriors return to Honolulu to close out the home schedule with a pair against CSUN, Friday, March 24 and Saturday, March 25. Both matches begin at 7:00 p.m. at the Stan Sheriff Center.