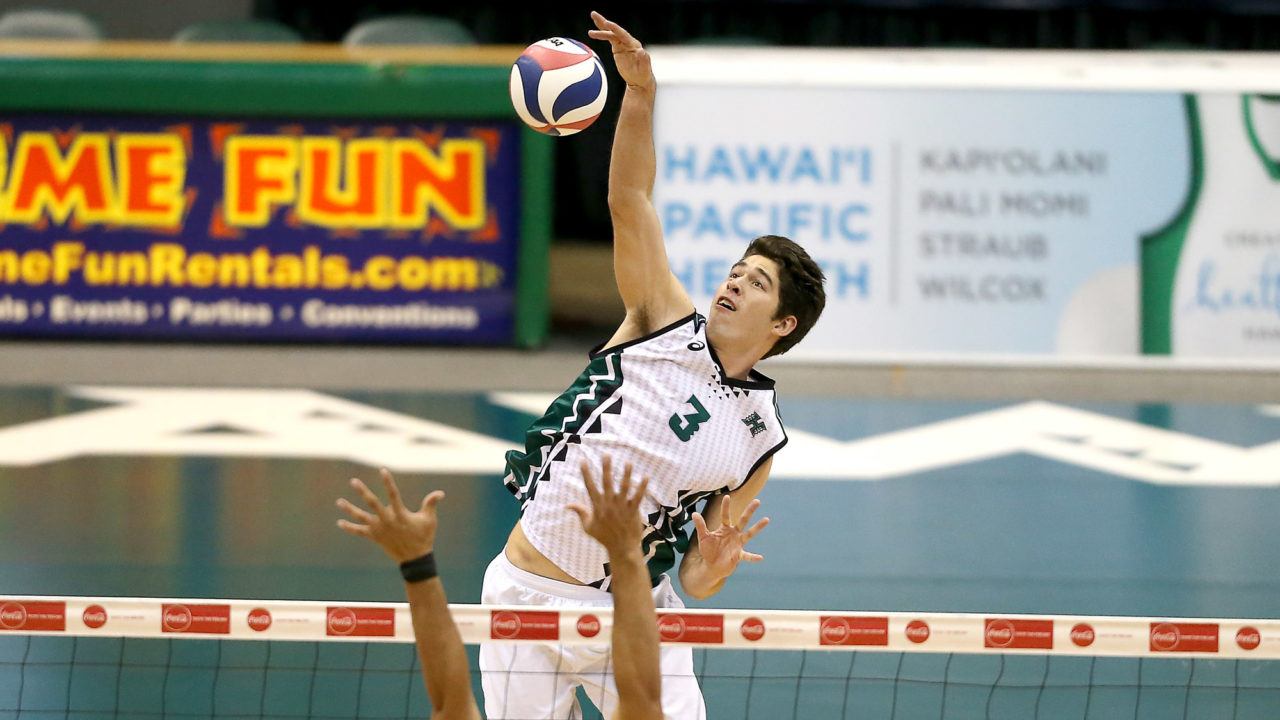 The University of Hawaii’s best service game since their season-opener carried the Rainbow Warriors to a 3-0 sweep over UCSD on Friday. The game kicks off a week-long mainland road trip that will take them to the Midwest early next week before returning home to Hawaii.

Hawaii ticked off 8 service aces on just 9 errors in the game, with two strikes each from Brett Rosenmeier, Hendrik Mol, Kupono Fey, and Rado Parapuncy. In their first game of the season, against Erskine, Hawaii had 13 aces to just 6 errors – and ever since, Friday’s contest was the closest they’ve come to having more aces than errors.

Hawaii star Stijn van Tilburg had a quiet night, with just 6 kills on 13 swings, but his teammates picked up the slack. While no Warriors were in double figure kills, Brett Rosenmeier led the team with a career-high 9 kills (.316 percentage). Patrick Gasman chipped in an errorless 8 kills on just 10 swings.

UCSD hit just .097 n the game and didn’t have anyone with more than 7 kills. Drew Sloane was the team’s top performer with 8 total blocks (7 assists, 1 solo), as the Tritons led the overall blocks margin 9-7.

Each team entered the contest with five-match win streaks. The Rainbow Warriors (11-2, 4-2 MPSF) made it six straight while also extending their win streak over the Tritons to nine.

With the score tied at 13 in Set 1, Rosenmeier spurred a 6-1 run with back-to-back kills and a service ace as UH built a 19-14 advantage. Rosenmeier and Kupono Fey finished the set with three kills each as the Warriors hit .286.

UH trailed early on in Set 2 following a 15-minute delay due to complications with the scoring computer. But the Warriors responded with a 5-1 run giving them a 10-6 lead. Consecutive kills by Gasman and Jennings Franciskovic put the Warriors up by five and a few plays later, Gasman’s fifth kill extended the lead to 19-12. Outside hitter Rado Parapunov entered the match and tallied two kills and an ace in the 25-15 rout.

The Tritons showed some life in Set 3 taking leads of 7-4 and 16-12. Back-to-back aces by Hendrik Mol pulled the Warriors within one and Parapunov’s second ace put UH on top 18-17. Hawai’i led 23-21 before the Tritons answered with two straight but the Warriors closed out the match will kills by Fey and Rosenmeier.

The teams began the day as the owners of the two longest current win streaks in the MPSF, both at five contests. With the result, UC San Diego falls to 5-6 overall and 2-5 in the MPSF. The Tritons had come out on top in their previous two conference tilts, including Wednesday’s home sweep over No. 13 CSUN. Hawai’i moved to 11-2 overall and 4-2 in league play.

Junior opposite Tanner Syftestad wound up with a team-high seven kills, coming off of six straight in which he had provided the match high with 14 or more. Even in defeat, UCSD had 9.0 total team blocks, to 7.0 by UH. Redshirt sophomore middle blocker Drew Sloane started and had a match- and career-best eight total blocks, to go along with one kill and one ace. Freshman outside hitter Devin Pontigon (Oceanside/El Camino HS) collected five kills on seven swings off the bench.

Fourth-year senior middle blocker Shayne Beamer made his return to the court after missing the previous six matches, contributing a pair of kills.

A pair of 3-0 mini-runs had UCSD up 7-3 in the opening frame. UH countered with a 3-0 stretch of its own a bit later, however, to draw even at 11-11 and force the first timeout of the evening. An attack error gave the Tritons the next point, but the Rainbow Warriors tallied six of seven from there, and ultimately scored the last five.

Once again in the second, UCSD got off to a strong start, managing the first three points on three bad UH attacks, the last two through combination blocks by Sloane and Syftestad, and then Sloane and Xander Jimenez. Hawai’i notched the following four points to take its first lead of the stanza. A 3-0 sequence gave the visitors a commanding 19-12 advantage as Triton head coach Kevin Ring, celebrating his birthday Friday, used his second timeout.

Game three was the tightest, featuring nine tie scores and three lead changes. The Tritons used a 4-0 run to push ahead, 7-4, and cause a UH timeout. Beamer, Luke La Mont and junior setter Milosh Stojcic had kills around a solo denial by La Mont.

A Rainbow Warrior service error coming out of a UCSD timeout gave the home side a slight 17-15 edge, but UH answered by tallying the ensuing four points. The Tritons never regained the lead, but did level matters twice at 19-19 and finally at 23-23 on a stuff block by Sloane and Syftestad. Kills by Kupono Fey and Brett Rosenmeier ended the match. Rosenmeier thus led all players with nine kills.