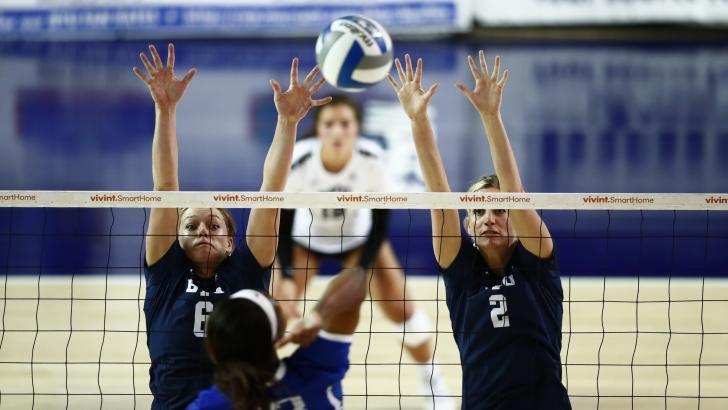 The #8 BYU Cougars won their 20th match of the season on Thursday night, defeating the Pepperdine Waves in straight sets behind strong defense and a balanced attack.

In the first frame, Pepperdine closed to within 22-20 before the Cougars scored the final three points, including the set-ending kill by freshman middle Kennedy Redding.

Pepperdine kept the score close in the second as well, trailing by just a single point at 18-17, before the Cougars went on a four-point scoring run. A Jones-Perry kill sealed the 25-21 set victory for BYU.

The third set was all BYU and the Cougars won 25-15 on Miller’s 11th kill of the night.

Next up, BYU travels to Loyola-Marymount for a Saturday match, while the Waves host #22 San Diego, also on Saturday.

ALL-AROUND EFFORT HELPS NO. 8 BYU PAST PEPPERDINE IN THREE

Veronica Jones-Perry led the Cougars with 12 kills, followed closely by McKenna Miller with 11. Lyndie Haddock set the team with 31 assists to go with 10 digs for a double-double while Mary Lake contributed 15 digs.

Pepperdine (12-10, 4-5 WCC) got off to a quick offensive start in the first set, leading BYU (20-1, 9-0 WCC) 5-1 early on. A pair of kills from Miller then helped the Cougars score the next five-straight points to go up 6-5. BYU went on a 5-1 run from errors by the Waves to take a 13-11 advantage, forcing a Pepperdine timeout. The set remained close until kills by Cosy Burnett and Jones-Perry helped increase the Cougar lead to four, 19-15. BYU led by as many as five before the Waves scored three-straight to get back within two, trailing 22-20. The Cougars eventually won the set 25-20, however, after a kill from Kennedy Redding.

A 4-0 run, capped off by another Redding kill, pushed BYU to a 7-5 advantage in the second set. Back-to-back aces from Tristyn Moser kept the Cougars ahead 14-12, but Pepperdine capitalized on BYU errors to stay in the set, down just one at 18-17. The Cougars scored the next four points, capped off by a Sara Hamson kill, to take a 22-17 lead. A kill from Jones-Perry then gave BYU the set 25-21.

After three-consecutive attack errors from the Waves, the Cougars took an 8-5 edge in the third set, forcing a Pepperdine timeout. Another Hamson kill made it 13-8, and a kill from Burnett extended the lead to nine at 19-10. The Waves scored the next four points to make it 19-14, but BYU cruised from there, taking the set 25-15 on a Miller kill.

The Cougars stay on the road next, heading to Loyola Marymount Saturday, Oct. 21, at noon PDT. The match will be streamed live on TheW.tv. Links to the video stream and live stats can be found on the BYU women’s volleyball schedule page.

The Waves out-blocked the Cougars with 7.0 team blocks to 4.5.

Alli O’Harra led the team with five blocks against the Cougars, while Jasmine Gross had a team-high eight kills. Heidi Dyer and Hannah Frohling posted seven kills apiece as well.

Pepperdine out-blocked the opposition with 7.0 team blocks compared to 4.5. BYU had a big attack effort with 40 kills on a .193 hitting percentage, while the Waves posted 32 smashes on a .126 success rate. The Waves also added 30 assists, two aces and 45 digs, whereas 34 assists, five aces and 53 digs.

The Waves held tough in the first two sets, beginning by going toe-to-toe with the Cougars en route to a 13-13 tie in the first. After a few blocks from O’Harra and Harris and kills from Gross and Lyons, the Waves were two-away from the Cougars late in the set at 20-22, but BYU buckled down and secured the final points for a 25-20 win and 1-0 advantage.

In the second set, the Waves stayed close to BYU yet again, finding a 15-15 tie late with three-consecutive blocks from Harris and O’Harra to help the cause. The Cougars again shut the door, however, and went into the break with a 25-21 win for the 2-0 game lead.

The Cougars were ready after intermission, coming out with an 11-5 lead early on. The Waves were unable to close the gap and BYU won the WCC match-up in straight sets after putting gup the final 25-15 set win.

On Saturday, the Waves will continue with tough competition, hosting No. 18 San Diego at 12 p.m. in Firestone Fieldhouse. The match will stream live on TheW.tv.