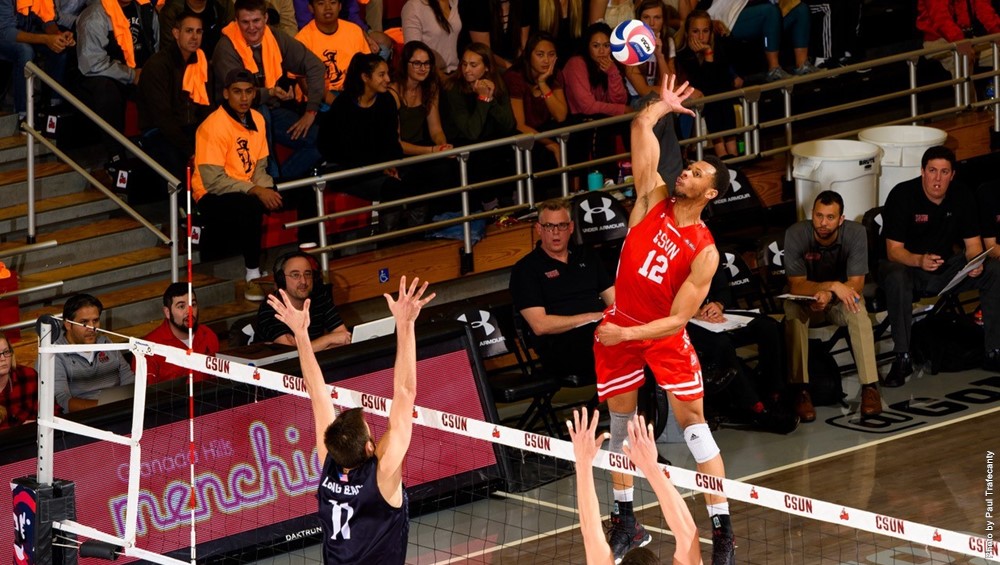 In easily the best individual attacking performance of the season, 6-7 opposite Arvis Green of #8 CSUN put away 40 kills in an epic five-set loss to #4 UCI Friday night. Current Photo via CSUN Athletics

“It feels good having a great game, but it would have been better if we got the win.” said Greene.

Coach Jeff Campbell added, “Arvis had probably the best attacking match by any hitter in the conference this season, maybe the entire country.”

UCI’s balanced attack won out, however. The Anteaters had four players in double-digit kills, led by Aaron Koubi and Karl Apfelbach with 17 kills each. Apfelbach had the match’s lone double-double by digging 10 balls in defense to go along with 3 blocks. Koubi narrowly missed a double-double with 9 digs, but led the team in aces with 2 and added 2 blocks as well. Seven-footer Scott Stadick tied a career-high with 14 kills on a ridiculous .722 hitting percentage (14-1-18). Stadick also blocked 3 balls. Joel Schneidmiller also pounded 14 kills on .321 hitting. Schneidmiller added 7 digs, 2 blocks and an ace. Austin Wilmot led all net defenders with 8 blocks on the evening, which was only the third time this season he led the team in blocks in a single match. Libero David Parker finished with a team- and season-high 14 digs on the night. Setter Dante Chakravorti finished with 55 assists, which was the highest total by a Big West player in conference play this season. He also added 5 digs, 3 blocks and an ace while directing the attack to 329 hitting.

For CSUN, it was truly the Arvis Greene show. His 40 kills came on .384 (40-12-73) hitting while adding 7 digs, 4 blocks and a team-high 2 aces. Eric Chance had an excellent night of his own, with 9 kills on 14 errorless swings, hitting .643. He added 3 digs, 3 blocks and an ace. Josiah Byers led the Matadors with 5 blocks. Libero Emmett Enriques led all floor defenders with 15 digs. Setter Schylar Lillethorup finished with 51 assists, leading the attack to .301 hitting.

Outside hitter Aaron Koubi and opposite Karl Apfelbach led UCI with 17 kills with Apfelbach recording 10 digs and three block assists. Middle blocker Scott Stadick and outside hitter Joel Schneidmiller each added 14 kills in the win. The 14 kills ties a career-high for Stadick. Setter Dante Chakravorti had 55 set assists, the most by a Big West player in a conference match this season. Libero David Parker tied his season-best with 14 digs.

While UCI had a balanced attack, CSUN was a one-man show with Arvis Greene Jr. posting a career-high 40 kills in 73 swings. Both the kills and attempts are the most in the nation this year.

In the first set, back-to-back kills by UCI’s Karl Apfelbach and Scott Stadick created a small separation, 10-8 then the Anteaters went on a 4-0 spurt, which included an ace by Tucker Pikula and a block by Joel Schneidmiller and Austin Wilmot to extend the margin to 18-11. A Matador service error would give UCI a 25-17 victory. Stadick would record five kills on six attempts without an error (.833).

A pair of Aaron Koubi aces put UCI in front 6-3 in the second set.  UCI would hold a 12-9 advantage before CSUN would out-score UCI 6-1 to take a 15-13 lead. A dump by Dante Chakravorti and a kill by Schneidmiller would tie the set at 18-18.  With the score knotted at 20-20, UCI used a kill by Apfelbach and an ace by Grant Friedman to gain the 22-20 edge. Another crafty move by Chakravorti pushed a kill off the block to win the set 25-23. Koubi would put down five kills in the set.

A pair of Matador kills broke a 16-16 tie and CSUN would be on top 19-17 until a Stadick kill was followed by a long rally that ended in a Schneidmiller kill to tie the third set at 19-19. A pair of Arvis Greene kills moved CSUN back in front 23-21. The Matadors would not relinquish the lead, winning 25-22.

CSUN went on a 5-0 run, which included three Anteater attack errors to lead 8-4. UCI would score three of their own to close within 8-7. Austin Wilmot had a solo and a block assist with JB Kam to give UCI their first lead of the fourth set 18-17. Two CSUN errors put the Anteaters back in control 20-19, but the Matadors would close out the game, out-scoring UCI 6-2 to force a fifth set.

In the fifth set, UCI scored three straight on a Stadick kill and two CSUN attack errors, the last a huge block by Stadick and Koubi to open a 5-2 lead. The Matadors would draw to 7-5 before consecutive kills by Schneidmiller and Koubi made it 9-5. CSUN would chip away and tie the set at 11-11. Neither team wanted to put it away as they went back and forth until a CSUN service error was followed by a dump by Chakravorti to end the set 22-20 and the match 3-2.

Greene pounded a career-high 40 kills, the most by a hitter in a five-set match in the NCAA this season. Greene, who hit .384 on a career-high 73 attacks, came within a single kill of the CSUN rally scoring era record of 41 set by Dan Rhodes in 2006.

Greene’s total is the most by a CSUN hitter since set scoring changed to 25 in 2011. The senior opposite also had seven digs, four blocks and a pair of aces to account for 44.0 of CSUN’s 84.0 points in the match.

“Arvis had probably the best attacking match by any hitter in the conference this season, maybe the entire country,” said CSUN head coach Jeff Campbell.

“It feels good having a great game but it would have been better if we got the win,” said Greene. “I used a lot of line shots and a lot of sharp cut shots helped me a lot, it took a variety to get a lot of kills.”

Eric Chance added nine kills on 14 errorless attacks to hit .643 while Maciek Ptaszynski chipped in eight kills (.231) and 10 digs. Setter Schylar Lillethoruphandled the setting duties over the final three sets and handed out a career-high 51 assists and libero Emmett Enriques had a match-high 15 digs in the loss.

“It was a great match, but we started off a little slow in the first two sets,” added Campbell. “In sets three and four, we made a few changes and it changed the dynamic, our passing improved and our setting improved.”

The Matadors got off to a slow start, putting down just eight kills and hitting .040 in dropping set one 25-17. The host Anteaters hit .385 in the set to claim the eight-point win.

CSUN then got its offense in gear in sets two and three, hitting .400 and .412 but still trailed two sets to one after winning the third set 25-22.

Needing a win in the fourth set to stay in the match, the Matadors jumped out to an 8-4 lead, forcing a UCI timeout following Chance’s ace. A 5-1 run by the Anteaters knotted the score at 9-9. But kills from Ptaszynski and Greene followed by a UCI hitting error pushed the CSUN lead back to three.

The hosts battled back to take an 18-17 lead before a Ptaszynski kill coupled with a Greene ace put CSUN back in front 19-18. A 2-0 UCI run gave the Anteaters a 20-19 lead but another Ptaszynski kill sent the Matadors on 5-1 run which all but sent the match to a fifth and deciding set.

After a Josiah Byers service error, Greene’s 31st kill of the match gave the Matadors the 25-22 win.

The Anteaters got out to a quick start in the fifth, leading 5-2 after seven points. The UCI lead swelled to four at 9-5 before the Matadors put together a 4-1 run, capped by a Chance kill, to pull within 10-9.

A Dimitar Kalchev kill evened the set at 11-11 but CSUN wasn’t able to wrestle back the lead. After another Greene kill tied the score at 13-13, Joel Schneidmiller‘s kill gave the Anteaters their first match point at 14-13.

But Greene lost his footing on his approach as he attempted to end a rally and his attack hit the antenna. The Matadors then saved four more match points, the last at 20-19, when service error followed by a kill by UCI setter Dante Chakravorti ended the match.

Karl Apfelbach and Aaron Koubi each had 17 kills to lead the Anteaters who wound up hitting .329 as a team to CSUN’s .301.