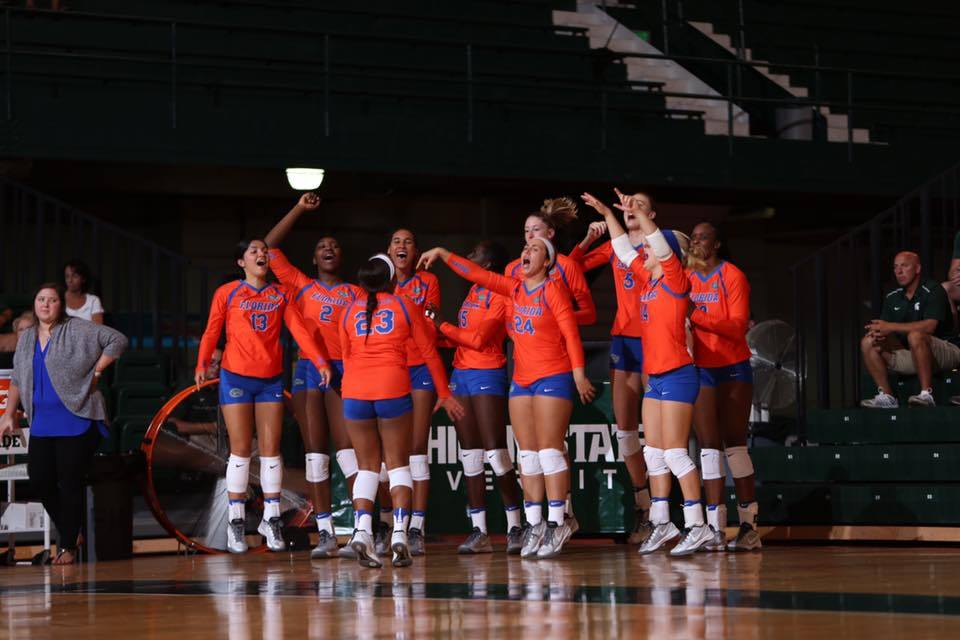 No. 8 Florida Gators volleyball team demolished the 1-8 LIU Brooklyn Blackbirds (Northeast Conference) in the final match of the Blackbird Invitational in New York for the Gators’ last road tourney to open their season.

During the match, Florida was given a chance to show their full strength, getting 13 players off the bench and starting three freshmen. The Gators celebrated their sixth straight win and fifth sweep in a row.

Freshmen players Darrielle King and Rachel Kramer had career days- King with 9 kills and 3 blocks, and Kramer with no errors, 5 kills and 2 blocks. Florida posted 7 aces against LIU Brooklyn, making it the fifth match this season with at least five aces.

The Blackbirds had an early 3-1 lead in the first set, but Florida’s powerhouse offense went on a 7-0 run to take control of the scoring for the rest of the game. LIU never had a lead in the second set, and the Gators’ offensive scoring runs made it impossible for the Blackbirds to come back.

LIU took an early lead in the third, but Florida had a 4-point run, and then controlled the game to go on a 9-0 run and continued until the match was over.

BROOKLYN, N.Y. — Sunday’s Blackbird Invitational finale against LIU Brooklyn was yet another opportunity for the Gators strength – their depth – to shine. Florida started three freshmen and played 13 athletes in a 3-0 (25-14, 25-14, 25-18) sweep of LIU Brooklyn to cap off the No. 8 Gators’ final road tournament to open the season.

Florida improved to 6-1 on the season Sunday with its sixth straight victory and fifth consecutive sweep, highlighted by veterans Alex Holston and Carli Snyder, while freshmen middles Darrielle King and Rachael Kramer had career days, King with nine kills, three blocks and a .667 clip, and Kramer with an error-free .714 hitting percentage, five kills and a pair of blocks. Snyder posted her third double-double this season with 10 kills and 11 digs, while Holston had a team-high 12.5 points for the Orange and Blue.

Freshman Cheyenne Huskey set the last two points of the second set and the whole final frame for the Orange and Blue, and once again Florida capitalized with several serving runs, two five-point strands thanks to Holston in the second and third sets, and a six-point run by junior libero Caroline Knop in the first. Knop finished the day with a team-high 12 scoops in the back row, her third most this season.

WORDS FROM WISE
“This was a great match to get players experience. We see the growth of our freshmen middles and it was a match where they were given the opportunity and took full advantage of it.”

Up Next: The Orange and Blue will wrap up an eight-match road strand at No. 13 FSU Wednesday in mid-week action. First serve for the Fresh from Florida Sunshine Showdown between the two volleyball foes is slated for 6 p.m. and will stream on ACC Network Extra. As always, Gator play-by-play Tom Collett will have all the action on the airwaves on ESPN Gainesville.

BROOKLYN, N.Y. – The LIU Brooklyn volleyball team bounced back from a loss in the morning session to close out the 2016 Brooklyn Dazzler Blackbird Invitational with a win, beating NJIT, 3-0. LIU fell to nationally-ranked No. 8 Florida in the second match of the day, 3-0.

In the first set, the Blackbirds used back-to-back kills from Lilliquist to take a 3-1 lead over the Gators. Florida used two straight kills of its own to tie it up, 3-3, and the battle waged on. A UF mistake, followed by a kill from Lilliquist and a service ace from senior Alex Larsen, and LIU was up once more, 6-3.  But a 7-0 run by the Gators saw the visiting team go up, 10-6, and Florida would stay in control from there. Another 5-0 run widened the gap to 15-7, and though LIU would capitalize on Florida’s mistakes to score two points right away, it would not be enough. The Gators would take the first set on a kill, 25-14, earning the 1-0 match advantage.

Florida’s hitters came out to play in the second set, using six straight kills to help the Gators take an 8-1 lead over the Blackbirds. LIU would start to battle back, using two kills from Lilliquist and another ace from Larsen to cut the gap to three points, 9-6. Another 4-0 run for the Gators made it 15-7, and not long after, Florida was able to string together another spree of five straight points to go up, 23-11, and eventually win the set, 25-14.

Set three was the closest of the day for the Blackbirds, and started out that way. Two kills from Lilliquist helped give LIU the 4-2 lead, before Florida would come back to score four straight points and go up, 6-4. Later in the set, a kill from freshman Katharina Krepper cut the lead to one point, 11-10, and then a kill from Larsen and a Florida error tied the set up, 12-12. But the Gators answered with a 9-0 run, taking control of the set, 21-12. Though the Blackbirds would score late points, it would not be enough to regain control, and Florida won the third set, 25-18, and the match, 3-0.