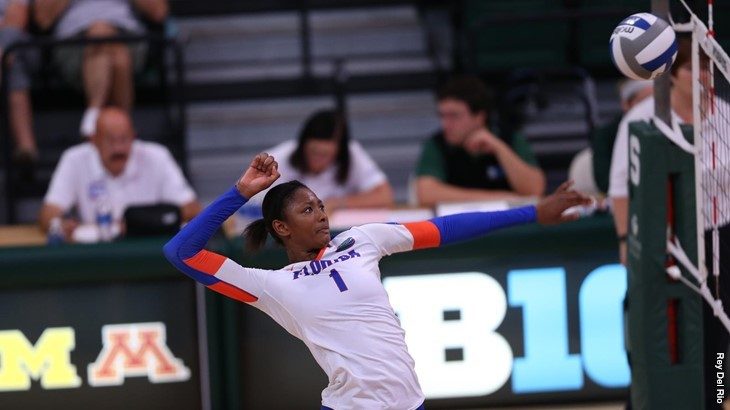 Alhassan, Florida’s captain, led the team in kills with 15 and blocks with 5. Allie Monserez recorded 38 assists in the Gators 5th win of the season.

Denver’s limited offense only saw 28 total team kills as Kayla Principato led her team with 7. Denver moved to 4-4 on the year.

BROOKLYN, N.Y. — Junior captain Rhamat Alhassan had a special day for the No. 8 Gators, who racked up their fourth straight sweep this season against the Denver Pioneers (25-17, 25-20, 25-11) in the opening match of the Blackbird Invitational Saturday. Alhassan hit an error-free .789 with 15 kills and added five blocks for a team-high 18 points.

Thanks to serving runs from Allie Gregory, Chanelle Hargreaves and Allie Monserez, Florida separated from the Pioneers in the first with an 11-3 run that gave the Gators control for the 25-17 set win. UF opened the second with a 5-0 lead under Alex Holston‘s serve and entered the locker room up 2-0 at the break with the 25-20 second-set win. The third was all Gators, wo worked to a 24-9 advantage before the Pioneers fended off match point twice until junior outside Carli Snyder slammed down one of her 11 kills and 13 points for match point.

In addition to Alhassan’s season-best clip, Saturday’s match allowed redshirt junior Shainah Josephto get her feet wet after treating an injury the past two weeks — and that she did, slamming down set point in the first frame. Freshman middle blocker Rachael Kramer had an impressive showing in the third set, slamming down two monster kills and posting three roofs in the final frame.

Freshman Allie Gregory dropped over a career high two service aces, Florida had just two reception errors and hit .437 as a team, its second-best efficiency of the season so far.

The Orange and Blue will wrap up the Blackbird Invitational Sunday with a noon match against host LIU Brooklyn.

WORDS FROM WISE
“To score 18 points as a three-rotation player tells you the level at which Rhamat Alhassan was today. She just has a way of changing a match both with her offense and her defense.”

BROOKLYN, N.Y. – Starting off the Blackbird Invitational against its toughest opponent of the year, the University of Denver volleyball team dropped the opening match of the tournament to the University of Florida in three sets, 25-17, 25-20 and 20-11.

The Pioneers (4-4) couldn’t slow the [8] Gators on the offensive side of the net, as Florida hit .437 in the match to DU’s .063 while maintaining a defensive presence with 10 block to Denver’s four.

Monique Domme tallied 15 assists for DU, followed by seven from Piyusha Boteju as they split setter duties. Boteju also added seven digs while Nola Basey was close behind with six.

UF’s Rhamat Alhassan led all attackers in the match, tallying 15 kills and no errors for an impressive .789 mark, while Carli Snyder added 11 kills on a .320 rate. Allie Monserez was the driver of Florida’s offense, totaling 38 assists in three sets.

The Pioneers were outhit in the first set as Florida recorded a .278 swing mark to DU’s .091 despite four blocks from Denver. The difference in the set came on the Gators’ 16 kills to DU’s eight while Florida added the only two service aces in the set.

Willis and Basey led the attack with two kills apiece, while Willis added four block assists and was complemented by Principato with three of her own.

The teams were back and forth early in the set with neither side owning a lead greater than one point and Denver on top at 10-9.  The Gators fired off a 12-2 run to claim the lead at 21-12 late in the set while DU rallied for a 4-1 run of their own to cut the deficit to 22-16, but Florida would not surrender the cushion en route to a 25-17 final.

Denver improved the attack with a .176 rate, but the Gators kept their pace with a .556 mark. UF maintained a strong presence on the defensive side as they tallied five team blocks to DU’s zero.

Principato took it upon herself to lead the offense, totaling five kills in the set on a .364 swing percentage, followed by Willis’ perfect 3-for-3 mark on her attempts and two kills each from Okoye and Moni Corrujedo.

Florida came out firing in the second set after recording the first five points of the frame, but Denver pulled no punches as they fought back to cut the Gators’ lead down to 10-9. Florida maintained a five-point cushion at 20-15 late in the set and eventually claimed a 2-0 lead in the match after a 25-20 final.

DU couldn’t slow Florida’s attack as the Gators hit .542 in the final frame, compared to -.107 from Denver. UF kept a strong presence on the net as well with three team blocks to the Pioneers’ zero.

Okoye and Corrujedo led Denver with three and two kills, respectively, while Principato and Willis each recorded one.

The Gators continued their offensive push, opening up the final set on a 10-3 run to put DU at an early disadvantage and prompting the quick timeout. The pause in action didn’t slow Florida, extending the lead to 18-5, and matched Denver point-for-point from there for a 25-11 final.

The Pioneers will have a quick break before resuming action at the Blackbird Invitational with a match against host LIU-Brooklyn at 4 p.m. MT.