Hawaii Squeaks Past USC In Opening Round Action 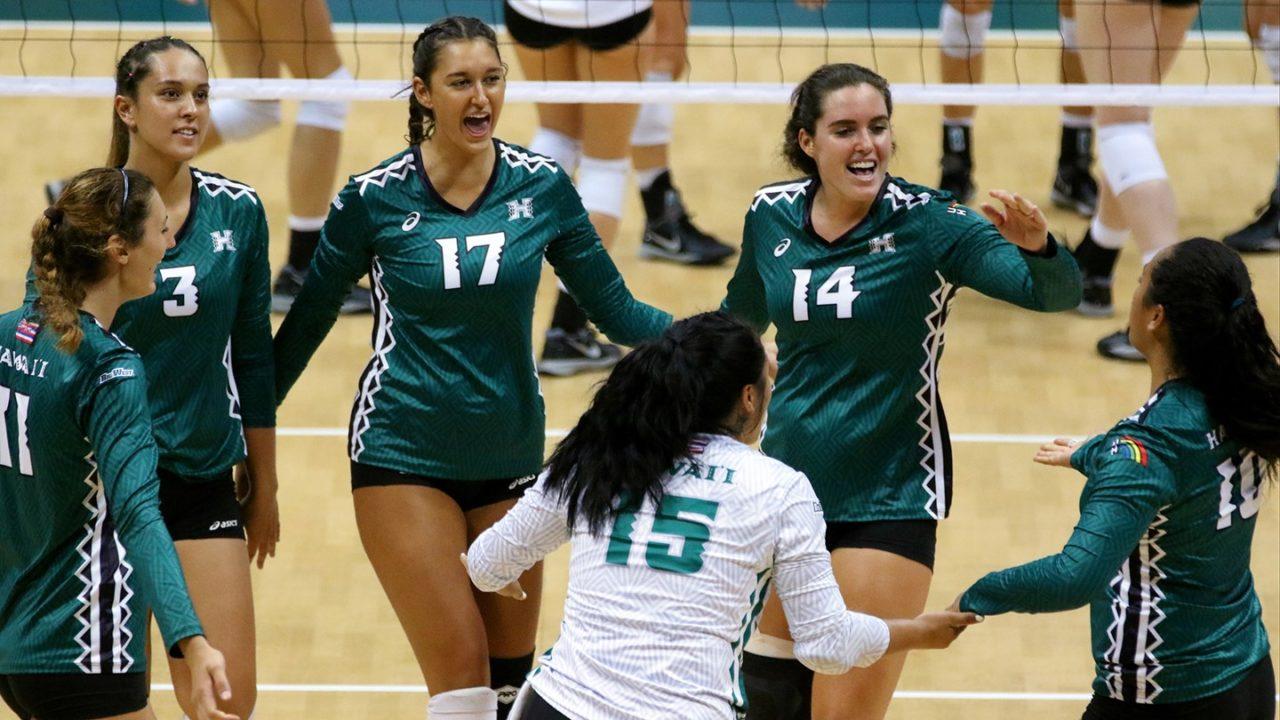 The two teams battled down to the wire, but Norene Iosia’s 46 assists and Nikki Taylor’s 23 kills proved to be the difference.

Hawaii will face the #2 Minnesota Golden Gophers in the second round.

MINNEAPOLIS, Minn.—The No. 12 University of Hawai’i women’s volleyball team (23-5, 15-1 Big West) survived and advanced to the NCAA Tournament second round after outlasting USC in five grueling sets to open the tourney, 25-22, 25-20, 22-25, 16-25, 15-13 at the Sports Arena in Minneapolis, Minn. The Rainbow Wahine had four players record double-digit kills, led by Nikki Taylor who put down 23 kills with six blocks while Emily Maglio added a career-high 15 kills with six blocks. Annie Mitchem posted 12 kills; McKenna Granato had her third double-double and Norene Iosia tallied her 13th double-double of their careers.

Taylor, the two-time Big West Player of the Year, notched her eighth 20+ kill match season and her 19th double-digit kill game of the season. It also marked her seventh double-double of the year with 10 digs.

Maglio hit a team-high .484 with no errors on 31 attacks. She notched her 10th double-digit game of the season and also added three digs as well.

Granato recorded 11 kills with 10 digs while Iosia dished out 46 assists while adding 11 digs. Savanah Kahakai had a team-high 19 digs to lead Hawai’i.

The first set was a see-saw battle that saw five lead changes and eight tie-scores. USC actually led at 18-17 before UH scored four straight points off four kills to take a 21-18 lead. From there, UH would hold off the Trojans down the stretch to take Set 1, 25-22. Maglio led the ‘Bows with five kills followed by Nikki Taylor and McKenna Granato who both had four kills apiece.

Early in Set 2, UH’s roofing company recorded four straight blocks to take a 7-4 lead. The Rainbow Wahine went on to record seven blocks in the frame to help propel the ‘Bows to take the second frame, 25-20.

But in the fifth set, Hawai’i regrouped and dug deep to stay alive. The set saw 12 ties and two lead changes. The Rainbow Wahine were able to hold off the Trojans in the end, sparked by a Kendra Koelsch dink shot kill that gave UH an 11-10 lead that they would not relinquish as they escaped with a 15-13 win in Set 5. Both teams were neck-and-neck in the set, with USC sideoutting at a 85% clip, but UH holding a 92% edge in sideout% was the difference. UH hit .375 in the last set (the highest of the match) while holding USC to a .273 hitting percentage. Taylor led UH with seven kills while hitting .429 in the last set alone to lead UH to the win.

It is the 19th-straight season that UH has advanced to the second round of the NCAA tournament. The ‘Bows have only lost in the first round twice, in 1984 to Oregon in Eugene, Ore. And in 1997 to Loyola Marymount at Long Beach, Calif.

Hawai’i started three freshman to begin the match, Natasha Burns, Emma Smith and Iosia. The ‘Bows out-blocked the Trojans, 13.0-to-11.0 for the match and edged them in hitting percentage, .245-to-.220.

For USC’s Mick Haley, it marked the first time that a Trojan team under his leadership fell in the first round of an NCAA Tournament. USC wasled by Khalia Lanier who had a match-high 26 kills. Libero Taylor Whittingham, who was playing on a torn ACL, recorded 32 digs. Madison Murtagh had a match-high seven blocks.

Hawai’i will now play the winner of the No. 2-seeded Minnesota vs. North Dakota match on Saturday, Dec. 3 at 2:00 pm HT.