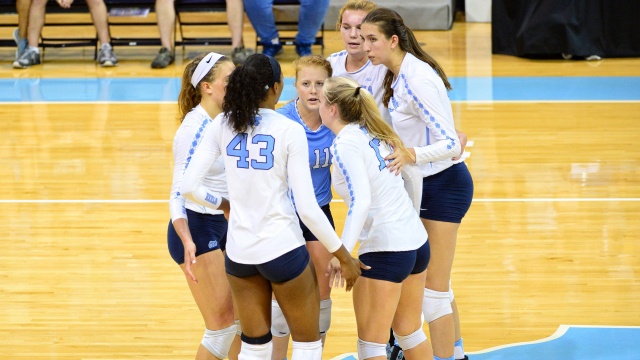 North Carolina will now face Coastal Carolina in the second round on Saturday.

UNC spread out their attack as eight different players recorded a kill and no player reached double digits. Abigail Curry recorded 21 assists for the Tar Heels.

High Point could not get any offense going as they only had a swing percentage of 48%. They end their season with a 26-9 record.

CHAPEL HILL – #7-seed North Carolina opened the postseason on a high note on Friday night, capturing a 3-0 (25-13, 25-12, 25-23) victory over High Point in the First Round of the 2016 NCAA Volleyball Tournament. The Tar Heels advance to the NCAA Second Round for the 11th time in program history and will take on Coastal Carolina at home on Saturday, Dec. 3, at 6 p.m.

“First of all, I’d like to congratulate High Point on a great season and for winning their conference,” said head coach Joe Sagula. “Tom [Mendoza] and his crew have done an outstanding job in his first year there. Tonight, I thought we came out really strong. I thought we set the momentum early, served tough, and took some really good swings. Both Julia [Scoles] and Taylor [Leath] were controlling the offense and I think that helped us a lot. I also thought Sheila Doyledug a lot of balls, especially in the second set when High Point made a good run.

“I was really pleased and I think our experience showed early. Overall, we didn’t block as well as we typically do, and I thought High Point did a really great job with 12 blocks on the match. I’m happy that we won this match and ready to focus on the next one at hand.”

Carolina’s serving and defense kept High Point off balance, as the Tar Heels out-hit the Panthers, .266 to .051 despite being out-blocked 12-4 and totaled seven aces.

“We told our team that we need to be aggressive on the serve,” said Sagula. “Whether it’s Julia or Fricano on the jump serve, whoever’s out there, we have got to go after it. If you don’t serve tough at this point, then every team is good enough to run their offense. We didn’t serve as tough in the third set. It means a lot to get those points. The whole team gets excited [on a good serve]. When you serve, it’s a bit of a gift to the whole team to gain some momentum.”

Julia Scoles led Carolina on all sides of the ball, narrowly missing a double-double with 16 digs, nine kills and three service aces. Beth Nordhorn was next with eight kills, followed by Taylor Leath with seven.

Libero Sheila Doyle put up 14 digs in the match. Hayley McCorkle bested her career high with seven digs to go with give kills, and Leath also turned in seven digs.

Abigail Curry dished out a total of 21 assists, while freshman Mariah Evans posted 12, and both Tar Heel setters added four digs and an ace.

The Tar Heels, who entered the match ranked fifth in the nation with 3.01 blocks per set totaled just four stuffs in the match, with Taylor Fricano assisting on all four.

Taylor Treacy teamed up on a block in the second set, the 280th of her career, to move into a tie for 10th place all time at Carolina in career block assists. Doyle and Fricano both moved up a spot on their respective season lists, as Doyle moved into seventh with 540 digs on the year while Fricano is now fifth with 134 block assists. Fricano needs just nine more assists before the season ends to become Carolina’s all-time single-season blocking leader.

An ace by Curry helped the Tar Heels start the match with a 3-0 lead, and a pair of kills by McCorkle pushed the advantage to 7-2. Carolina continued to cruise, pushing ahead 19-10, on a kill by Leath, and an attack out of bounds closed the set, 25-13. UNC sided out at 84 percent in the opener and was led in kills by Scoles with four.

Three aces in four serves by Scoles spotted Carolina a quick 8-2 lead to begin the second set, and an ace by Evans made it 13-5. The serving prowess continued for the Tar Heels, as an ace by Moseman set up set point, 24-11, and an errant swing by Olivia Barr ended the frame, 25-12. The Panthers struggled on offense in the set, hitting -.133 with seven errors and just three kills.

Carolina won the first three points of the third set, but High Point did not allow the Tar Heels to run away with the third set, never allowing the Tar Heels to lead by more than four. UNC maintained its moderate advantage late in the set, 20-17, but after a timeout the Panthers stormed back to win three straight and tie the score at 20. HPU tied the score again at 21 and at 22, but Carolina never allowed the Panthers to overtake the lead, and a swing into the net finished out the match in three sets, 25-23.

“We were really determined, but I knew after the second set that High Point wouldn’t be finished,” said Sagula, “because they’re well-coached and have some competitive kids out there. They came out strong and made a competitive third set. We’re really fortunate that we made a couple of key plays at the end to help us.”

The Tar Heels will have less than 24 hours to prepare for the next round as Carolina returns to the court on Saturday at 6 p.m. to face Coastal Carolina. The Sun Belt Champions narrowly defeated James Madison, 3-2, earlier in the day to capture their first-ever postseason win.

“I think it’s going to be a really tough match,” said Sagula. “Coastal [Carolina] has been here before, they have a couple people who have been here all three years, they have a dominant middle that they go to, and they know how to win…I’m so glad we’re playing at home, and we’re going to be as prepared as we can be in 24 hours.”

CHAPEL HILL, N.C. – The High Point University volleyball team fell in three sets to No. 7 North Carolina on Friday night in Carmichael Arena in the Purple & White’s second ever appearance in the NCAA Tournament.

The Panthers (23-10) played catch-up throughout the night as the Tar Heels (28-3) built early leads in each of the three sets. Thanks to those fast starts, UNC was able to pull away late in the first and second sets (25-13 and 25-12) before HPU pushed the Tar Heels to the brink in the third falling 25-23.

“”First of all, it was just a great experience for our team as far as the direction that we want to continue to go” head coach Tom Mendoza said of HPU’s first NCAA Tournament game since 2010. “With our program, we are trying to build to where we are in this position every year and hopefully this experience will allow us to continue that. And I think it shows that we have the pieces, it’s just a matter of getting comfortable in the situation. It was disappointing in the first two sets because we just knew that we were not representing who we actually were and I thought that was what was good about the third set; that we were showing the things that we were capable of doing and that we have been able to do for stretches of this year.”

Sophomore Jordan Hefner led the Panthers with five kills and seven blocks while hitting at a .444 clip on the night. Joining Hefner in the middle, sophomore Molly Livingston added five kills, five blocks and two aces on the night.

From the back row, senior Megan Kennedy recorded 15 digs as the Purple & White tallied 36 digs in the match.

High Point’s offense was held down in the first two sets, but racked up a .233 attack percentage in the final set to keep it close.

In the second set, Hefner got it going with three kills and two blocks, but despite the middle blocker’s output the Tar Heels built a 19-11 lead. Once again, North Carolina was able to close the set strong with a 25-12 victory.

After the intermission, UNC grabbed 8-4 edge, however this time the Panthers refused to go quietly. Two blocks followed by a kill from Tylman made it 10-8 before the Tar Heels scored the next two to regain a four-point advantage (12-8).

But again HPU fought back as Angel posted two kills before Livingston added two aces to make it 13-12. From there, the Panthers stayed within two points until a block gave UNC a 20-17 lead.

The Panthers continued to show their fight as Livingston sandwiched kills around an ace from sophomore Abby Broadstreet to even the score at 20-all.

What They Said:
Haley Barnes on ending the season
“However our season wrapped up, it wrapped up, but we were just excited to come out and play the game we love together.”

Haley Barnes on offseason
“I’m excited I think we have a lot of potential. I think we kind of hit that first mark. Ever since I was a freshman, our goal was to win a conference tournament and so we did that this year. That was great, and I think we can start setting that bar a little bit higher and a little bit higher, keep reaching and reaching and building on this program. With everything that’s been set up to my coming here and Jordan (Hefner)’s coming here, now we can keep building on that and keep pushing and make High Point a team people don’t want to play with anymore.”

Jordan Hefner on offseason
“Especially with having a new coach this year, I’m really excited because he’s already taught us so much that I can’t wait to see what he’s going to teach us to help us get past the first round next year.”

Jordan Hefner on what was the difference in the third set:
“Our energy definitely changed the game for us, because when we are excited, and when we are calm and collected, and just playing our game, we can do anything that we want. So, Carolina was a great team to play against and I think coming out in that third set and having that energy helped us fight and keep up with them.