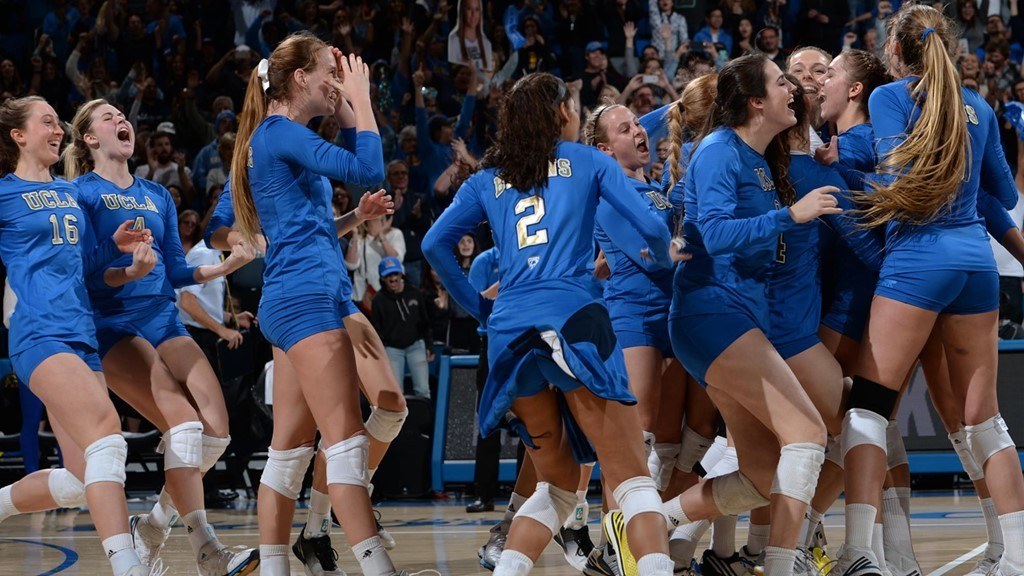 UCLA’s senior class went big on senior day in Los Angeles. The group, which makes up the most important part of the veteran Bruins squad, ended their regular season with a thrilling win over their arch-rivals the USC Trojans.

USC won the first and third sets, and then the drama began in set 4, where there were 15 ties, 6 lead changes, and USC had 3 match points that they couldn’t capitalize on. Eventually, two kills from their leader Jordan Anderson, sandwiched around a UCLA block, forced a 5th and deciding set.

In that 5th set, UCLA finally settled in and never trailed (although the score was tied at 6 different points).

Performances by UCLA seniors in the game:

That veteran presence will be missed next year for the Bruins, but this class, many of whom committed shortly after the Bruins’ 2011 National Championship, might be the Bruins’ best chance at a final 4 since 2011, depending on how Sunday’s draw goes.

USC had three players with double digit kills on the day, though none of the 3 hit better than .300. That includes Khalia Lanier, who had 26 ills on a whopping 71 swings for a 225 average. to go with 10 digs.

USC also out-blocked the Bruins 11-9 on the day, led by 7 from Jordan Dunn.

The Bruins (24-6, 15-5 Pac-12) scored three of the first four points of the match on kills by Anderson and Frager and a USC service error, but the Trojans responded with a 10-2 run and never looked back to take the opener. UCLA could only get as close as three the remainder of the set, as USC won the first 25-17. Anderson was error-free with four kills in five attempts, while Formico added five digs, as the Bruins were out-hit .516 to .333.

USC (18-13, 10-10 Pac-12) scored the first point of set two, but UCLA got the next five and didn’t trail for the rest of the set. A Van Winden ace, two Buechler kills and two Trojan errors put the home team up 5-1. After a USC sideout, a 6-2 spurt by the Bruins made the run 11-3 and their lead 11-4. UCLA’s lead would get as high as eight, but was cut to a pair by the Trojans at 20-18 and 21-19. However, the Bruins scored four of the last five to take the second. A Felix kill, a USC attack error and a Chandler ace gave UCLA five set points, and on the second attempt, an Anderson kill closed out the 25-20 victory. Anderson, Buechler and Felix had four kills each, while Formico added six digs, as the Bruins out-hit the Trojans .276 to .250.

Set three featured seven ties and three lead changes, but the Trojans pulled away late to take a 2-1 match advantage. Trailing 6-5, the Bruins scored four in a row on kills by Felix and Van Winden, a Felix solo stuff and a Felix/Van Winden combo to go ahead 9-6. The lead was short-lived however, as the Trojans went on a 6-0 run to go ahead 12-9. Despite a 3-0 run by the Bruins to even things at 12, USC would not relinquish its lead for the rest of the set, getting its edge to as high as five and winning the third 25-20. Anderson and Buechler both had four kills, while Van Winden added three, as the Bruins were out-hit .343 to .282.

Set four was even more thrilling than the one before, with 15 ties, six lead changes and three USC match points squandered. With eight ties through the first 16 points, a 6-1 run by the Trojans gave them a 14-9 edge. USC led by five as late as 18-13 before the Bruins started their comeback. At 22-19, an Anderson/Frager block and two Trojan attack errors evened the score. Tied at 23, a Lawless/Frager block gave the Bruins a set point, but the Trojans saved it. A Frager kill gave UCLA a second set point, but USC scored the next two and had match points at 26-25, 27-26 and 28-27. However, an Anderson kill, a Miller/Van Winden block and an Anderson kill closed out a 30-28 victory. Buechler posted six kills and four digs, Anderson and Frager each had three kills and Formico recorded four digs, as the Bruins out-hit the Trojans .195 to .062.

Despite six ties, the Bruins never trailed in the final set, scoring three of the first four on kills by Anderson and Frager, with the duo also teaming up for a block. UCLA led 5-2 before USC tied it at five. The score was tied again at six and seven before Van Winden and Anderson kills and a USC attack error put the Bruins up 10-7. UCLA still led by three as late as 13-10, but USC rallied to even things at 13. A Buechler kill gave the Bruins their first match point, but it was saved. Another Buechler kill made it 15-14, but a second match point was saved by the Trojans. A Felix kill earned UCLA a third match point and it was the charm, as a USC attack error closed out the 17-15 victory. Along with Buechler’s five kills, Felix and Frager added three each, while Formico had six digs, as the Bruins out-hit the Trojans .242 to .194.

The Bruins find out where their NCAA Tournament begins on Sunday when ESPNU airs the NCAA Selection Show at 6 p.m.

Freshman outside hitter Khalia Lanier recorded her 15th double-double of the season and led the Trojans with 26 kills (10e, 71att, .225) to go with 10 digs, two service aces and a block. Her 71 attacks set a new career high. Junior opposite hitter Niki Withers had season highs of 19 kills and 42 attacks (7e, .286) and posted a new career high with seven digs. Junior opposite hitter Brittany Abercrombie had 14 kills (3e, 32att, .344) with five blocks and four digs.

Senior middle blocker Elise Ruddins put up nine kills (3e, 21att, .286) and had five blocks and a service ace. Junior middle blocker Jordan Dunn put up seven blocks (one solo) and added a pair of kills. The Trojans hit .254 as a team (71k, 26e, 177att) and got 33 assists and four digs from senior setter Alice Pizzasegola and 32 assists and eight digs from junior setter Reni Meyer-Whalley. Pizzasegola scored on three service aces and Meyer-Whalley had two aces. On defense, senior libero Taylor Whittingham dug up 25 balls to go with four assists and a service ace while sophomore defensive specialist Victoria Garrick had six digs and a pair of service aces.

The third set was tied seven times before the Trojans broke a 12-all tie and went ahead for good. USC led by five at 23-18 when Ruddins put up a block and then closed the set on a final Bruin error for the 25-20 win and a 2-1 lead in the match. USC led by as many as five in the fourth frame at 15-10, and had a three-point advantage at 22-19, but were caught by UCLA at 22-all. The Bruins took set point first, but the teams flipped back and forth until UCLA sent the match to a fifth set with a 30-28 win.