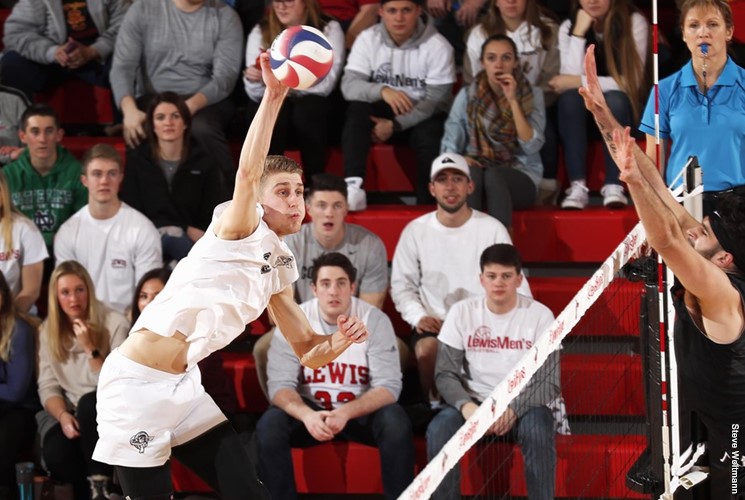 The Flyers were led offensively by opposite Ryan Coenen with 21 kills, hitting .514 on the night, to lead all attackers. No other Flyer had more than 8 kills. Setter Matt Yoshimoto dished out 30 assists and added 3 blocks and a team-high-tying 2 aces to the fray. Tyler Mitchem led all net defenders with 4 blocks against the Buckeyes. Libero Michael Simmons finished with a match-high 8 digs.

Ohio State had two players in double figures in kills. Leading the way for the Buckeyes was pin attacker Jake Hanes with 16 kills, hitting .324 against the Flyers. Nicolas Szerszen had an impressive night as well, with 12 kills and only 1 hitting error, finishing with a hitting percentage of .500. Setter Sanil Thomas had a match-high 33 assists to run the efficient Buckeye attack (.338). Thomas’ 6 digs tied Maxime Hervoir for the team lead in floor defense.

In all, Ohio State seemed shell-shocked. Lewis forced 7 overpass kills and almost twice as many out-of-system balls to keep the Buckeyes on their heels. OSU also failed behind the service line—they finished with 1 ace against 17 service errors. What made matters worse was OSU’s inability to slow the Lewis attack down, producing only 2 blocks the entire match.

The win moves the Flyers to 10-4 on the season, 4-1 in the MIVA, while the Buckeye’s eight-game winning streak was snapped and they are now 11-3 overall, 4-1 in the MIVA.

Lewis built a quick lead in the first set as a 7-1 run opened up a 10-4 lead. Ohio State battled back to make it a 12-9 game, but Lewis was quick to respond with five of the next six points as Perinar had a pair of kills in the run.

The momentum continued for the Flyers as they built a 24-15 advantage after back-to-back kills from Coenen and Coenen also finished off the set with a kill, his sixth of the set.

The teams traded points throughout the second set before the Flyers took the lead for good at 12-11 on a service error. It was a 15-14 advantage when they reeled off five straight points to take a 20-14 lead. The Buckeyes staved off three straight set points before Coenen’s seventh kill of the set finished off the set and gave Lewis a 2-0 advantage.

Lewis fell behind 7-3 in the third set, but responded with four straight points to tie the match, thanks to kills from Coenen, Perinar and Kyle Bugee (Los Altos, CA/Homestead). OSU answered with three straight points, but the Flyers came back again and tied the set at 11-11 after three straight Coenen kills.

The Flyers took their first lead of the set at 14-13 on an ace by Coenen. The two teams traded leads from there until a Coenen kill gave the Flyers the lead for good at 22-21. TJ Murray (Barrington, IL/Barrington) followed that up with a kill. After an error, Perinar recorded a kill to give Lewis a 24-22 advantage. Following an OSU kill, it had a service error, ending the match.

Ohio State attacked .338 as a team, but struggled to slow down the Flyer attack. Lewis swung .373 and recorded three more blocks and four more aces than OSU in securing the upset victory.

Maxime Hervoir and Sanil Thomas each posted a half dozen digs to lead the charge defensively while Jake Hanes and Nicolas Szerszen combined for 28 kills on the offensive attacks.

SET 1: A Buckeye service error opened the set and Lewis maintained the subsequent lead throughout, stretching the margin to as many as nine points without ever relinquishing the upper hand in a 25-18 winner.

SET 2: Defense was at a premium in the second stanza when Ohio State’s .500 team hitting efficiency was not enough in the 25-22 Flyer triumph. Despite a 17-12 kills advantage, the Buckeyes were unable to overcome Lewis’ .632 attacking percentage. Ohio State shot itself in the foot six times from the service stripe with errors. The Flyers rattled of a five-point run mid-set to transform a slim 15-14 advantage into a 20-14 stronghold. Ultimately, it was Lewis coming out ahead at 25-22.

SET 3: Ohio State raced out to a 7-3 lead, prompting a Flyer timeout. The break in action proved beneficial to the home squad though, quickly followed by a four-point spurt to even the tally at 7-7. Leader status would swap possession multiple times from there, ultimately ending in the hands of Lewis as 25-23 winners.