#9 Stanford Fights Back Against UCSD to Clinch MPSF Tournament Berth 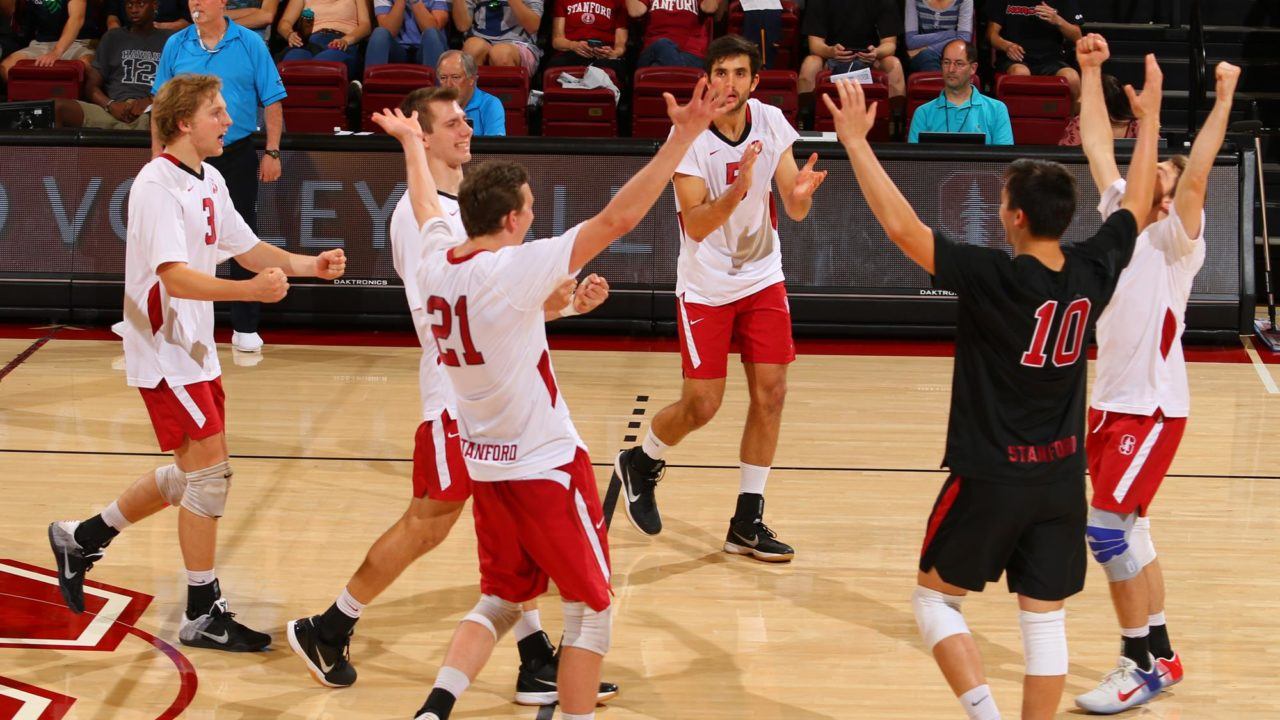 After a romp in the first set, where 9th-ranked Stanford out-hit their opponents UCSD .450-.036, Saturday’s matchup turned out to be a back-and-forth, near-upset that ended with a Cardinal win and a clinched spot in the MPSF tournament.

Stanford hit .469 in the 3 sets they won, including an efficient .615 in the final set, but just .068 in the 2 setsz won by UCSD in what was overall a very offensive match ffrom both teams.

UCSD had more kills (60-57) and blocks (11-8) than Stanford, but Stanford’s back-row defense did just enough with 42 digs for the win. That included 12 digs from Cardinal libero Evan Enriques – his 12th time in double figures this season. He’s tied for 1st in the MPSF with Irvine’s Dillon Hoffman for the most digs/set.

Offensively, Stanford was led by a career-high 21 kills from Gabriel Vega, matched with only 4 errors for a .362 hitting percentage. He had 5 kills and a block assist in the decisive final set to put a nail in the coffin of the Tritons’ upset bid.

UCSD threw a diverse offense at Stanford, with 14 players seeing court time. 10 of those 14 took at least 1 swing, and 9 of them had at least one kill in the game.

Ian Colbert rose to the top of that pile with 16 kills and 7 digs. Drew Sloane had just 3 kills, but got 5 block assists for UCSD.

UCSD’s ultimate undoing was the service game, where they had 4 aces but 22 service errors. hat’s a season-high for them in service errors – even as an area that has challenged them all season long.

With the win, Stanford has sealed their spot in the MPSF tournament, and UCSD has ended their bid for post-season play. 7 of the 8 spots in the MPSF tournament have now been decided: Long Beach State, BYU, Hawaii, UC Irvine, UCLA, Pepperdine, and Stanford. That leaves USC< UCSB, and CSUN to fight for the remaining spot. USC holds the lead among those teams with 6 wins.

The win clinched an MPSF playoff berth for Stanford (12-11, 7-9 MPSF). The Cardinal has now appeared in the postseason nine of the past 10 years under head coach John Kosty.

Vega tied his career-high with 21 kills on .362 hitting to go with seven digs and two blocks. He had just six kills after the first three sets. He recorded 10 in the fourth and was a perfect five-for-five in the fifth set.

Vega was joined by redshirt juniors Clay Jones and Colin McCall in a postmatch Senior Night ceremony as the trio played its final match in Maples Pavilion.

Stanford opened the match with a dominating 25-12 win in the opening set, hitting .450 as a team. UC San Diego (7-17, 3-13 MPSF) rallied back to win the next two sets, holding the Cardinal to an .083 and an .057 attack percentages in the second and third sets, respectively.

The Cardinal made adjustments in the fourth set, posting 18 kills on .419 hitting to force a decisive fifth set. Stanford jumped out to an early lead in the final frame, never trailing as it improved to 4-0 in five-set matches this season.

UC San Diego was led by senior Ian Colbert who turned in a team-high 16 kills on .324 hitting. Sophomore Nathan Thalken added 11 kills and five blocks, while redshirt junior middle Bryan Zhu had 10 kills on a .538 attack percentage and five blocks for the Tritons.

Stanford closes out the regular season next week, traveling to UC Irvine and UC San Diego. The MPSF first round playoff matches will be played on April 15.

STANFORD, Calif. – The University of California San Diego men’s volleyball team stretched No. 9 Stanford University to the brink of an upset but dropped a five-set heartbreaker in Mountain Pacific Sports Federation (MPSF) action Saturday night at Maples Pavilion. Scores were 25-12, 23-25, 22-25, 25-23 and 15-11.

The exciting contest served as a brilliant showcase for UC San Diego in a fourth and final national television appearance for the 2017 campaign, on Pac-12 Bay Area.

UCSD thus saw its slim hopes of a first-ever MPSF Tournament appearance end in falling to 7-17 overall and 3-13 in the MPSF. Indeed it was the Tritons’ last-ever MPSF road date, as they head to the newly-formed Big West Conference as an associate member in men’s volleyball in 2018. On Senior Night, Stanford survived to move to 12-11 overall and 7-9 in league play. The Cardinal punched their own ticket into the conference tourney. The two teams will complete their season series in La Jolla on UCSD’s Senior Night next Saturday, April 8.

Three Tritons hit double figures in kills in senior tri-captain Ian Colbert (16), sophomore opposite Nathan Thalken (11) and redshirt junior middle blocker Bryan Zhu (10), the latter two off the bench. Colbert, a Belmont native, excelled in his return to the Bay Area, accounting for the decisive kills on set point in UCSD’s game two and game three triumphs before the host Cardinal rallied. He added seven digs.

Colbert’s effort also meant the end of a remarkable streak of 19 consecutive matches in which fellow tri-captain Tanner Syftestad held at least a share of the team high in kills. The junior opposite finished with eight. Colbert led all players with two service aces. Thalken and Zhu got to five blocks apiece, two of them solo by the latter, while junior setter Milosh Stojcic collected 46 assists, four digs and one kill on one attack.

“I am proud of how we fought tonight, especially after the performance we had in set one,” said UC San Diego head coach Kevin Ring. “It was great that a few (substitutes) heading into set two were able to make such an impact. Sets two through five were highly contested, so we appreciated and enjoyed the competitiveness, but were not satisfied with the loss.”

Stanford was up 12-6 at the first timeout of the opening set and was not troubled. The ease by which the Cardinal took that frame had Ring making wholesale changes toward Jimenez, Sloane, Thalken and Zhu to start the second.

The Tritons notched the first two points on a Thalken kill and combination block by Jimenez and Sloane. Stanford went up by as many as three, but another stuff block later by Thalken and Zhu pulled UCSD within one at 13-12, and Thalken’s lone ace, his first this year, leveled matters again at 14-14. The Tritons notched four straight around a Stanford timeout to take a 22-20 lead on a Thalken kill, Cardinal attack error, Luke McDonald ace and combo block by Thalken and Zhu. Colbert’s roll shot made it 23-21, and a big dig by Jimenez led to UCSD’s first set point at 24-22 on a rousing solo denial by Zhu on Jacob Thoenen. After serving an error, Colbert made up for it in a giant way with a powerful set-clinching kill from the back row.

The hosts tallied the first two points of game three and in fact were up 5-1 before the Tritons made their move, scoring six of the next nine to get within one at 8-7. That sequence included Zhu’s second solo block, again on Thoenen, for 6-4. UCSD pulled even at 9-9 only for Stanford to get the next three, but the Tritons stormed right back with four straight and seven of eight to force the Cardinal into a timeout.

Thalken and Zhu teamed up again for an 18-15 advantage. Stanford could not get closer than two points from there, with a Colbert kill forcing the home side’s second timeout at 20-16 ahead of his set-point tally.

The fourth was a difficult set for UCSD, which led virtually the entire time but fell narrowly short of completing the upset. The Tritons scored the first two points and were up 7-4 on a Zhu kill, 9-5 on a Colbert ace and 14-11 on an awry attack after back-to-back Sloane kills that necessitated Stanford’s first timeout. The Tritons maintained three-point cushions at 19-16 on Colbert’s other ace at the Cardinal’s other timeout, and 20-17 on a Thalken kill. Sloane and Stojcic partnered on a block off of the attacker, Clay Jones, for 21-18. After a seventh and final tie at 23-23, the home team finally grabbed the only lead of the stanza it would need, at 24-23. UCSD’s second timeout preceded an attack error that brought about the decider.

Stanford managed the first three points in the fifth and led for the entirety, taking command early with another 3-0 mini-run bringing the score to 6-2. UCSD made one final run with successive points for 11-9, but the Cardinal closed the deal.

With his seventh kill of the contest, in that fifth set for 11-9, Syftestad moved into the No. 10 spot all-time at UCSD in career kills, and now has 806.

UC San Diego flies back home on Sunday, April 2, and awaits a final home weekend for the 2017 season. The Tritons will host No. 8 Pepperdine on Friday, April 7, and No. 9 Stanford on Saturday, April 8. First serves inside RIMAC Arena on North Campus in La Jolla are set for 7 p.m.