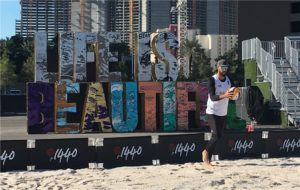 Tulane wrapped up the FIU Surf & Turf Invitational on a busy Saturday afternoon at the Lummus Park Courts, playing three duals to close out the team’s stay in Miami. The Green Wave took on two top-15 opponents and a conference foe, going 1-2 on the day to move to 15-8 on the year and 3-7 in CCSA play.

“We played some really good volleyball today against terrific opponents but fell short of making enough plays to defeat them. As good as we are, we have a lot to improve upon to get to the next level and will continue that process in practice over the next week.”

The Green Wave hit the sand early on Saturday, taking on No. 15 FIU in the second meeting between the two teams this year. Tulane managed one match victory, but the Panthers came away with the 4-1 dual win.

Tulane fell behind early, dropping straight sets to the hosting Panthers on court five. The Green Wave then bounced back on court four, with Tarin Mergener and Annie Shurtz battling back from a set-one loss to defeat FIU’s No. 4 pair, 2-1.

After evening the dual to one match apiece, Tulane fell to 1-2 on court three, as Hannah Holmes and Briana Correa dropped sets to FIU’s Katie Hogan and Helene Thelle, 17-21 and 11-21.

The Panthers notched their third victory of the day on court one to seal the dual win, despite Madeline Mertz and Lan Nguyen taking set one on a close score of 21-19. Tulane’s No. 1 pair then fell to FIU in the final two sets to drop the match 1-2.

In the final match of the dual, Tulane’s No. 2 duo of Kaylie McHugh and Tea Juric notched a convincing set-one victory on a score of 21-14 before falling in a close 22-24 match-up in the second set. In the deciding set, McHugh and Juric fell 11-15 as FIU took the 4-1 victory.

The Green Wave continued their winning ways against crosstown rival UNO on Saturday morning, coming away with a dual sweep in the first of two meetings between the two teams this season. With the win, Tulane improved to 6-0 in the all-time series with the Privateers.

No. 4 pair of Hannah Holmes and Briana Correa manufactured Tulane’s first win of the dual, clawing out a 25-23 decision in the first set and rolling over the Privateers on a score of 21-7 in the second. The Green Wave would move to 2-0 in the dual with a win on court one, as Madeline Mertz and Lan Nguyen completed a match sweep of their own on quick scores of 21-13 and 21-10.

Tulane sealed its sixth series win over UNO on court five, as Christina McAfee and Sarah Strasner defeated Brianna Vega and Samantha Uline to give the Green Wave the 3-0 lead.

Court two would also finish in straight sets as Tea Juric and Kaylie McHugh sealed their 18th win of the year on scores of 21-10 and 21-9.

Tulane completed the dual sweep on court three despite a set-one loss to UNO’s No. 3 pair Brooklyn Frank and Rachel Kuhn. Tarin Mergener and Annie Shurtz bounced back in the next two on scores of 21-15 and 15-10 for the Green Wave’s fifth match win over the Privateers.

The final match-up of the afternoon featured No. 3 UCLA, the highest-ranked team Tulane has played this season. Despite playing close to the Bruins on all five courts, the Green Wave were unable to string together set victories and fell 0-5.

Lan Nguyen and Madeline Mertz on court one were the first Tulane pair to turn in a decision, dropping close 17-21 and 18-21 sets to the Bruins. Tulane’s No. 4 flight of Tarin Mergener and Annie Shurtz would have similar results, falling in straight sets on scores of 15-21 and 17-21.

UCLA clinched the dual victory on court five, despite Tulane forcing extra points in the first set. Falling 20-22 in their first outing, Sarah Strasner and Christina McAfee experienced similar setbacks in the second set, falling 17-21 to give the Bruins the win.

The Green Wave head to Texas next weekend for the Houston Baptist Invitational, where they will play four duals against Central Arkansas, Texas A&M – Kingsville, LSU and Houston Baptist on April 8-9.

Results from Day Two of the FIU Surf & Turf Invitational