ACC Volleyball Destined for Co-Champions in 2017 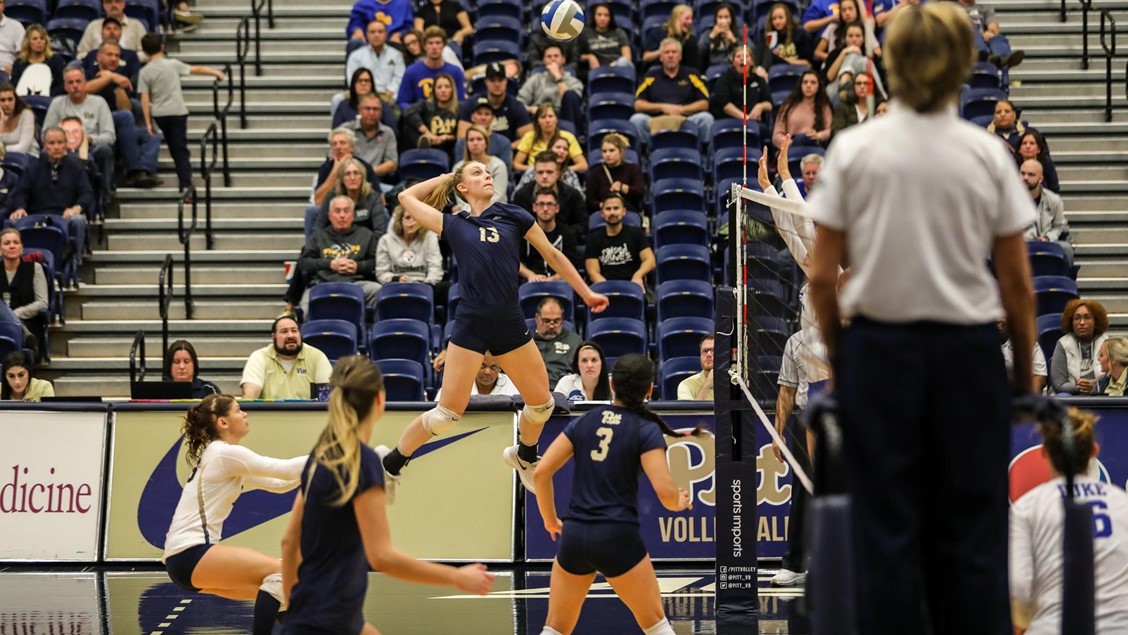 If all goes according to plan, 2017 would be Pitt's first ACC title and Louisville's second. Archive Photo via Pitt Athletics

The 2017 ACC women’s volleyball title appears destined to end with a whimper rather than much drama. The conference, which hasn’t had a tie for the conference title since 2008 since mega-rivals Duke and UNC shared it, seems destined for another shared honor this season with both Pitt and Louisville having matching 16-2 records in ACC play with 2 games remaining. For Louisville, this would be their 2nd-ever ACC title (they won in 2015), while for Pitt it would be their 1st.

NC State, who had been in the conversation until last week, lost twice over the weekend, first to Louisville and then to Notre Dame. There’s still an outside chance of a three-way tie for the title, but given what that would mean (Pitt and Louisville would both have to go 0-2 this weekend in winnable games), it seems unlikely at this point.

The Cardinals conquered a big hurdle on Sunday when they beat North Carolina 3-2 by winning the first 2 sets, losing the 2 after, and then rallying for a 5th-set tie-breaking win.

There’s arguably just one game left that could disrupt that plan: Louisville’s season-ender against Syracuse in Syracuse. The Orange are rated #114 in the latest NCAA RPI rankings, far lower than UNC, but have played well in conference with an 11-7 record so far. That includes winning their last 2 (after losing the 4 before).

Barring an upset there, there’s not much left in terms of the conference race – Pitt should cruise over Virginia and Virginia Tech, its last two opponents. They’ll receive the automatic bid, though both co-champions should expect an invite to the NCAA tournament.

The committee has some interesting decisions to make with the rest of the conference, however. The ACC, a much-improved league this season, has 6 teams ranked between 21st and 41st in the latest RPI. Behind Louisville (#21) and Pitt (#26), Miami is actually the 3rd-best of those teams at #31. The Hurricanes are 19-5 this year, and rank 4th in the ACC. They are one of the teams that were hit by Hurricane cancellations in a weather-ravaged start to the season, missing 5 games. The NCAA Selection Committee was non-committal on how they would approach those missed games at the time, and now the situation has arrived with the Hurricanes on the bubble. Those games would have likely helped Miami if they were wins: 3 were scheduled against current top-75 RPI teams (Temple, Auburn, James Madison).

Notre Dame got a big lift from their win over NC State, and with Syracuse and Boston College left, could do a little to help their standing.

So the question is: does the committee stick to 2 teams out of the ACC, invite NC State, or leapfrog the conference standings to bring more teams? Jared Anderson’s latest “Last 8 In” analysis has actually 6 ACC teams qualifying for the tournament: UNC, Florida State, Louisville, Pitt, NC State, and Notre Dame. By a miraculous quirk of the schedule, none of those 6 teams play another member of that group of 6 teams in the last weekend of play.

Auto Bid Analysis After the Standings:

As we’ve been saying for weeks, Pitt had the easiest schedule down the stretch so it has been unlikely for about a month that they’d do less than share the ACC title. So far, that plan has gone as expected: only Virginia and Virginia Tech remaining, who each have 3-15 records in ACC play

It’s been a miraculous turnaround for Louisville in year 1 under Dani Busboom Kelly. They were ACC Champions in 2015, but went just 12-18 overall last year. Now, at 22-6, they’re back in the NCAA tournament and just 2 wins away from sharing another conference title.