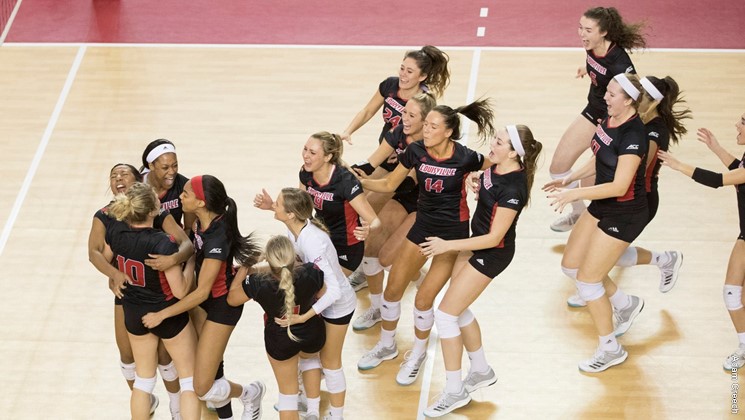 It was a wild, emotional senior day for the Louisville Cardinals. Current Photo via Louisville Athletics

In what was Louisville’s biggest remaining hurdle of the regular season, and in what was UNC’s last, best shot to improve their resume for what is a wobbly NCAA tournament resume, the Cardinals held off a furious Tarheel comeback to win 3-2 and remain in lock-step with Pitt atop the ACC.

This win was a microcosm of the Louisville season – their first under head coach Dani Busboom Kelly. They didn’t hit particularly well (.210), they didn’t dominate in the block (UNC had a 14-11 advantage), they had 5 aces but also 11 service errors, but they still found a way to win with back-row defense and Melanie McHenry.

McHenry had 30 kills on 66 swings (.318 hitting percentage). Her 66 attempts also accounted for over 36% of the team’s total attacks. On the season, McHenry has been responsible for about 30% of the team’s attacks, which puts her in the middle-of-the-pack among ACC team leaders. Those attempts have been inconsistent for much of the season, though, (she had 18 and 21 last week, 35 and 66 this week). The most encouraging sign here is the hitting percentage. That’s the first time this season in which she’s hit better than .300 with over 40 attacks.

“I can’t really single out one person, I feel like the whole team stepped up. They started looking each other in their eyes again, and just decided were going do this,” said Busboom Kelly. “Melanie McHenry carried us today, she’s been due for a great match. She had two great matches back to back this weekend, its awesome to see her perform that way. Gabbie Wiley led our team in digs and that’s extremely difficult for a defensive specialist, but she did an awesome job.”

Meanwhile, a pair of Cardinals had 25+ kills: Molly Auser with 25, and Gabbie Wiley with 28. So good was the back-row defense that Louisville held UNC to just .158 hitting in the last set without recording a single block.

For UNC, the 3rd set turnaround began in part via Melanie McHenry errors (she had 4 in the set, including 2 of the first 3 UNC points), while on the positive for the Tar Heels, Holly Carlson got hot with half of her 10 kills coming in that set. The 4th was a more balanced effort by the Tar Heels, with 6 different Tar Heels combining for 12 kills. Louisville played a cleaner 4th set early, but got sloppy late – including going from up 20-19 to down 20-24 thanks in part to 3-straight hitting errors.

But things reverted to whence they were in the first two sets in the tie-breaker. Louisville had just 3 attack errors, and UNC could manage just 6 kills, as the Cardinals were dominant to finish off the win.

The Cardinals will finish the regular season against Boston College and Syracuse, while Pitt wraps up their season against Virginia Tech and Virginia. Louisville has the toughest among those games left (Syracuse), but all 4 should be winnable. 4 wins would leave the teams with the same record, though Pitt holds the tie-breaker and would get the automatic bid tot he ACC tournament. If both teams finish 18-2 in ACC play, though, both should be good for an NCAA invite – at least matching the 2 NCAA invites the ACC had last season (Pitt and UNC). 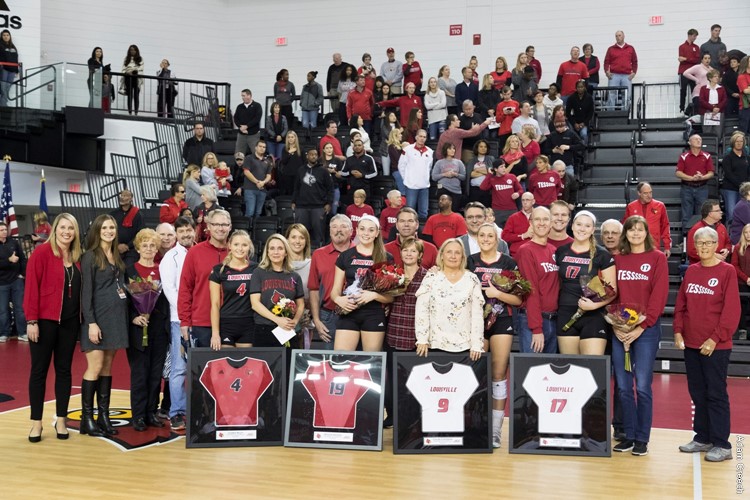 Melanie McHenry had a career-high 30 kills and two blocks to lead the University of Louisville to a 3-2 win over North Carolina in ACC volleyball action on Senior Day Sunday afternoon in Cardinal Arena.

“It was a good win by our team, it’s hard when you lose momentum to get it back and we did a great job keeping our composure in game five even when we were down,” said Dani Busboom Kelly, UofL head coach.

“I can’t really single out one person, I feel like the whole team stepped up. They started looking each other in their eyes again, and just decided were going do this,” said Busboom Kelly. “Melanie McHenry carried us today, she’s been due for a great match. She had two great matches back to back this weekend, its awesome to see her perform that way. Gabbie Wiley led our team in digs and that’s extremely difficult for a defensive specialist, but she did an awesome job.”

The first set featured eight ties and six lead changes in a back-and-forth affair. Louisville pulled in front 10-7 on an ace by Maggie DeJong. Carolina countered, getting to within one at 11-10 before a 3-0 run gave the Heels the lead at 17-16. Louisville answered with a 5-1 run to go up 21-18. Melanie McHenry connected for three straight kills to get to 24-21 and then McHenry and DeJong blocked Taylor Leath for set point.

The Cards popped out to a 4-0 lead in the second set, and never trailed. UofL added to the lead 9-2 on a block by McHenry. The Heels made a little run late, with three straight points, cutting the deficit to six at 20-14, but the Cardinals closed ranks on the strength of .375 hitting for the 25-17 win. Carolina hit just .061 but had four blocks.

The Cardinals used a 7-1 run midway through the third to go up 16-10, and then spread the lead even further at 20-13 on a kill by Amanda Green. The Tar Heels’ block came alive, with seven in the third set and three-straight blocks, one by Beth Nordhorn and two from Taylor Fricano, moved the Heels to within two at 20-18. The Tar Heels had a 6-0 run to move into the lead and get to set point at 24-21. The Cardinals staved off two set points before a kill by Leath kill finished off the third, 25-23. Louisville did little to help its own effort with .049 hitting.

“UNC is a good team. They’ve had a lot of injuries, some ups and downs. They’re a team that if you give them some life, they will battle. That’s what we didn’t want to do, unfortunately we did that,” said Busboom Kelly. They fought really hard. I thought they made some great defensive plays. We decided we had to stick together, and our whole team has to play great to win.”

The fourth set featured 11 ties and six lead changes. Neither team could gather any breathing room until a five-point run down the stretch by the Tar Heels made it set point, 24-20. A kill by Carolina forced a fifth set with a 25-21 victory.

Carolina popped out to a 5-1 lead early on three kills before a four-point Louisville run, powered by McHenry’s aggressive serving gave the Cardinals a 7-6 advantage. UNC regained the lead at 8-7, just before the side change, but it was all Louisville down the stretch. A UofL service error and a rare miss by McHenry tied the score at 11. Louisville ran off four straight, as McHenry’s 30th kill of the match was also match point at 15-11 for the win. The Cardinals kept their 10 match ACC home winning streak alive in Cardinal Arena.

UofL finishes up its regular season slate at Boston College on Wednesday 7:30 and at Syracuse on Friday at 1 p.m.

Redshirt freshman Holly Carlton was all over the court, posting her third triple-double of the season with 21 assists, 12 digs and 10 kills to go with two blocks and a service ace. The Sterling, Virginia, native is one of seven players in the nation to record three or more triple-doubles this season and the only student-athlete from a Power 5 conference to do so. Carlton, who recorded the first triple-double since 2005 against Coastal Carolina on Sept. 16, is the third Tar Heel under head coach Joe Sagula to record more-than-one career triple-double and the first since 1992.

Junior Taylor Leath registered her 17th career double-double and her sixth this season with 14 kills and 15 digs. Seniors Taylor Fricano and Beth Nordhorn were also influential on both offense and defense, as Nordhorn matched a career-high eight blocks with eight kills while Fricano tallied nine kills and six blocks. Additionally, Katharine Esterley stuffed five block assists as Carolina neared its season high with 14.0 stuffs as a team.

The match opened with an exciting, back-and-forth first set, featuring eight ties and six lead changes. Louisville pulled in front 10-7, but Carolina cut back within one, 11-10. A three-point run allowed UNC to take the lead, 17-16, but Louisville followed by winning five out of six to take over, 21-18. A kill from libero Casey Jacobs made it 21-20, but three straight kills by Louisville’s Melanie McHenry set up set point and McHenry teamed up with Maggie DeJong for a block to take the first set, 25-21.

Louisville began the second with a 4-0 lead, and that would prove all the advantage it would need, soon stretching it to 9-2. Three straight late cut the deficit to six, 20-14, but that was as close as the Tar Heels would come, as the Cardinals claimed the second set, 25-17. Louisville out-hit Carolina .375 to .061 in the frame with four blocks.

A 7-1 run midway through the third set gave Louisville a 16-10 lead, and a kill by Amanda Green seemingly put the match away, making it 20-13. However, three-straight blocks by Nordhorn, two with Fricano, cut the deficit to two, 20-18. McHenry struck a kill, but the Tar Heels followed by winning another six straight with two more Nordhorn-Fricano blocks, and back-to-back Leath kills made it Tar Heel set point, 24-21. The Cardinals wiped off the first two attempts, but another Leath kill finished off the third, 25-23, as Carolina survived to play another set. UNC won 12 of the final 15 points in the set, using seven blocks to hold Louisville to .049 hitting.

The fourth set was the closest yet, with 11 ties and six lead changes. Neither team made much of a run nor led by more than three until a five-point run down the stretch by the Tar Heels made it set point, 24-20. Once again, it was Leath who took the final swing, forcing a fifth set with a 25-21 victory.

Carolina rode its momentum into the fifth set, pulling ahead 5-1 early on three kills by Leath. However, a four-point Louisville run gave the Cardinals a 7-6 advantage. UNC went back ahead, 8-7, when the teams traded sides, but it was all Louisville down the stretch. After a pair of Cardinal errors knotted the score at 11, Louisville ran off four straight, as McHenry’s 30th kill of the match finished things off, 15-11, in the Cardinals’ favor.

North Carolina enters the final week of play, remaining on the road for a visit to Wake Forest on Wednesday, Nov. 22, at 2 p.m. The Tar Heels conclude the regular season on Friday, Nov. 24, at rival Duke.