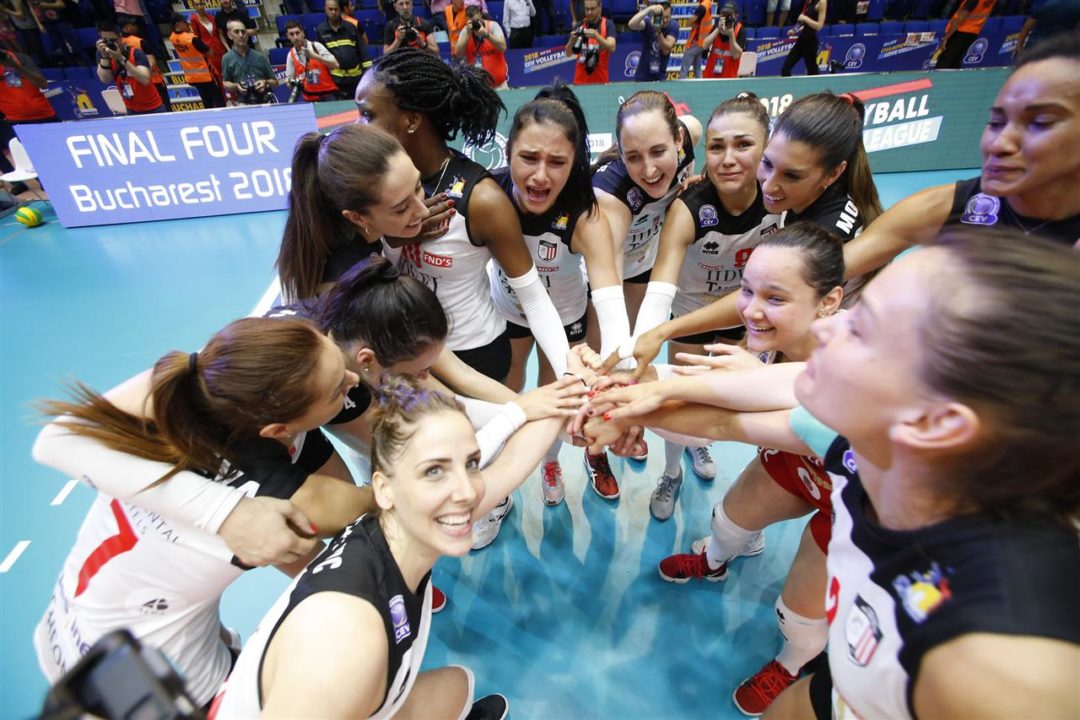 Alba Blaj gave the home fans in Bucharest a moment to celebrate on Saturday. Current Photo via CEV

If you love an underdog story, then Saturday’s Champions League second semi-final gave you one for the ages. They may have received a free pass to the semi-final as the representative of the host nation, but Romania’s CSM Volei Alba Blaj took advantage of that opportunity by upending the favored Galatasaray club in the 2nd semi-final in Bucharest. Already the first Romanian club in the final four, Alba Blaj has now assured itself of becoming the first Romanian club to medal at the event.

“It’s a memorable night! Once again we made history!” said CSM Volei Alba Blaj coach Darko Zakoc. “We were fantastic, played with heart, with passion… They were favourites, but at this stage everything  can happen. Tomorrow we will play in the final against the best team in the world, but like today, we can dream. I want to congratulate my team and our great fans!”

In a semi-final without nearly the same level of hype or interest internationally as the first, the presence of the host team drew a raucous crowd in the second match. In spite of the support, the home team struggled early, hitting just 39% in the first set and allowing Galatasaray 3 aces.

“I am disappointed!” Guneyligil said after the match. “They surprised us with reception and with ther middle blockers. It was a nightmare for us, because they won very easy. I didn’t expect it. Congratulations to Alba BLAJ! They deserved to win. VakifBank are a great team, but, like today, everything can happen in the final.”

But Alba Blaj settled in for the 2nd set, and eventually carried their offensive hitting percentage to 44%. That was the only major statistical category, aside from total points, where they beat Galatasaray. Galatasaray had more blocks (11-9), more kills (120-112), served better, received better, and scored more offensive points. But 15 service errors and offensive woes in key moments doomed Galatasaray in the end (they hit just 29% of their shots in the last set, though they also had 5 blocks there).

CSM Volei Alba Blaj, easily the smallest club in the final 4 who didn’t even win the Romanian League this year, relied heavily on 28-year old Cuban hitter Anna Cleger. She scored 27 points in the match on 4 aces and 23 kills to carry the lode offensively. She had 48 of her team’s 112 attacks, which comes out to about 43% of the available swings. By comparison, Galatasaray’s top scorer Dobriana Rabadzhieva (19 on 12 kills, 3 blocks, and 4 aces) had 29 swings – 24% of her team’s efforts. Even Zhu Ting, the best player in the world, had fewer than 30% of VakifBank’s swings in the first semi-final (though that number skyrocketed in crunch time late in the match).

While Galatasaray’s serve seemed the more effective of the two teams, and their reception was as well, they struggled to break Alba Blaj’s serve throughout the match: another key difference. In both the 2nd and 4th sets, Alba Blaj broke open huge leads on service runs mid-set, leading each set 21-13 before Galatasaray fought back late.

Watch the final point of Alba Blaj’s victory, and the ensuing celebration, below: