Eight Countries to be Represented in Mersin Semis Sunday 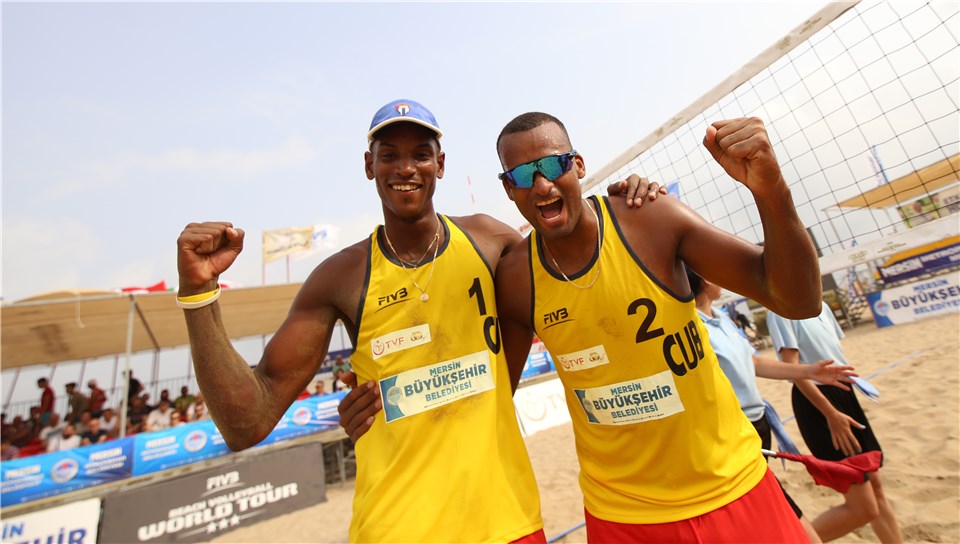 Eight countries will be represented in the Mersin Three-Star semifinals on Sunday morning after two more rounds of men's and women's action Saturday. Cubans Diaz Nivaldo/Sergio Gonzalez are looking for their third FIVB medal.  Current Photo via FIVB

Eight countries will be represented in the Mersin Three-Star semifinals on Sunday morning after two more rounds of action Saturday.

Schutzenhofer/Plesiutschnig are the lone semifinalist with a previous FIVB podium finish, having finished third at the Sydney Two-Star in November.

Josi/Lili have already secured their best effort on the FIVB stage, improving on a fifth-place finish at the 2017 Fort Lauderdale Five-Star.

This is the fourth FIVB appearance of 2017 for Keizer/Meppelink with their best finish coming in a 17th-place effort at the Hague Four Star in January. The duo finished ninth at the Hague Three-Star in June 18 for their best FIVB finish as a duo.

Strbova/Dubovcova are in their first FIVB podium hunt, with their previous best finish coming in a ninth-place effort at the Hague Three-Star in 2017.

Just two of the 12 women’s matches on Saturday went to tiebreak, including Plesiutschnig/Schutzenhofer surviving Jolien Sinnema/Laura Bloem (Netherlands) in Round 3.

“The Netherland played very well and it was very hard playing in the strong wind,” Schutzenhofer said. “We tried to handle it and play a little bit closer and shorter and in the end we kept our nerves and kept believing and that made the difference.”

No. 3 seed Nivaldo/Gonzalez are looking for their third FIVB medal, following a gold at the Langkawi One Star in April 2017 and a bronze at the Qinzhou Three-Star in October.

Perusic/Schweiner are looking for their first FIVB gold after a runner-up finish at the Montpellier One-Star in September. The Czech duo finished fifth in its last outing at the Xiamen Four-Star April 22.

Leshukov/Semenov are in just their fifth tournament as a duo and fourth on the FIVB stage. The Russians best previous finish was a ninth-place outing at the Kish Island Three-Star in February.

Heidrich/Gerson finished ninth at the Xiamen Four Star in April, their most recent FIVB effort. The duo are in their eighth tournament together and fifth FIVB event.

All four men’s semifinalists won in straight sets in Round 3 to advance. Nivaldo/Gonzalez took out top seeded Cherif Younousse/Ahmed Tijan from Qatar in Round 2 before topping Belarus’ Aliaksandr Kavalenka/Aliaksandr Dziadkou in straight sets to reach the semis.