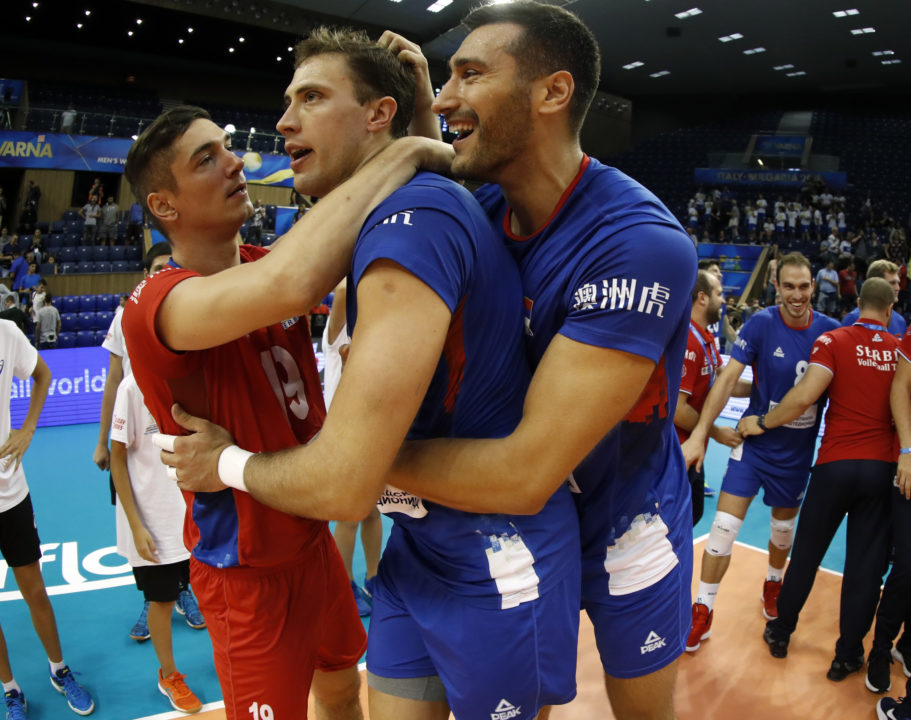 Aleksandar Atinasijevic (middle) has tied the rally-scoring record for most points in a World Championship match. Current Photo via FIVB

Friday’s epic 5-set match between France and Serbia to open the 2nd round of the 2018 FIVB Men’s Volleyball World Championships became a battle of opposites, with Serbia’s Aleksandar Antanasijevic and France’s Stephen Boyer putting up two of the biggest point totals in World Championship history.

Atanasijevic scored 38 for the victorious Serbians, while Boyer scored 34 for the losing French side in the match. Antanasijevic’s total ties Hector Soto of Puerto Rico, who scored 38 in a match against Argentina in 2006, as the most points scored in a men’s World Championship match since rally scoring was installed in 2002. Boyer’s total is the 5th-most in the same time-frame.

At 22 years, 5 months, and 11 days, Boyer is younger than all 3 men (4 occasions) ahead of him were in their 30-point outings. It also makes Boyer the second-youngest ever to do so, behind 18-year old Yuji Nishida who did so earlier this week for Japan.

This marks the 2nd time ever (and this week) that two players have scored 30 points in the same match. The 71 scored here is more than the 63 scored by Facundo Conte of Argentina and Nishida in combination in a preliminary round match earlier this week.

“Today we played good volleyball,” Atanajisevic said after the match. “We gave our best. France is one of the strongest teams in the world right now so we are satisfied with this win. There was nothing easy for us till now. In the first round we played against very strong teams including Russia and USA and now we face Poland, France and Argentina but probably it is better like this. Our goal is to qualify for final six and today’s victory will help us a lot.”

Both players hit over 60% in their efforts, and both contributed well beyond just their offensive points (Boyer had 5 blocks, Atanasijevic had 1 plus an ace). The crucial difference, though, wound up being that Atanasijevic had 6 in the tie-breaking set, including an out-of-system kill to set up the match-winning service ace.

Comparison of the two: