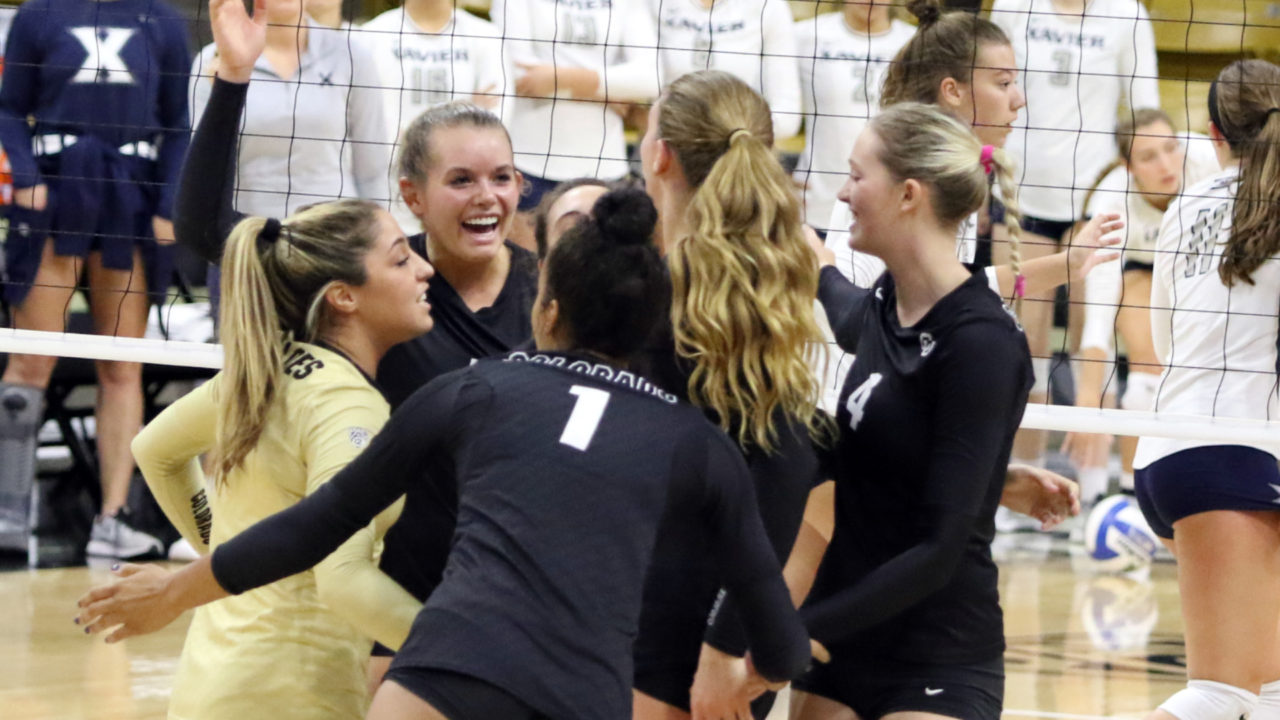 Buffaloes collect their 20th win of the year with sweep of Arizona.  Current Photo via Colorado Athletics

The host Colorado Buffaloes collected their 20th win of the year, sweeping the visiting Arizona Wildcats Friday night in Boulder. Set scores were 25-20, 25-18, and 25-19. Alexa Smith led the offense with 12 kills while Frankie Shebby chipped in 10. Brynna Deluzio handed out 33 assists while Smith and Shebby lead the defense with 7 digs apiece.

Kendra Dahlke and Tyler Spriggs led the Wildcats’ offense with 7 kills apiece while Mackenzie Hernandez collected 21 assists and 5 digs. In a losing effort, Arizona dropped to 10-16 (4-13 PAC-12) and will return to the court on Saturday, November 18th when they hit the road to face Utah.

Brynna Deluzio led the team with 33 assists. She also recorded six digs and one block.

SET 1: The Buffs came out of the gates quickly, recoding an early 5-2 lead. The Wildcats began to rally and although never taking the lead, they tied it up multiple times, first at 10-10 and again at 12-12. After that, the Buffs went on a four point run, forcing the Wildcats to take a timeout at 16-12. UA scored two after the timeout but were never able to find any kind of momentum. CU held possession for the majority of the remaining set and took the win, 25-20, thanks to two kills in a row by Alexa Smith.

SET 2: The second set started out a bit more even, the score going back and forth until the two teams were tied at 3-3. After that, the Buffs broke away and went on a 6-2 run, bringing CU’s lead to 9-5. This forced the Wildcats to take a timeout. Despite their timeout, UA could not get into any kind of rhythm. Later in the set, the Buffs went on a 4-0 run, bringing their lead to 17-12. The Wildcats took another timeout late in the set, but Colorado held on to momentum and took set two, 25-18, after two Arizona attack errors.

SET 3: CU and UA came out evenly in the third set with the two teams staying close throughout. Possession went back and forth until the Wildcats scored three in a row to gain a 10- 8 lead. The Buffs took a timeout and scored four in a row, taking a 12-10 lead. The Buffs eventually went on a 7-0 run which brought their lead to 22-15. UA tried to rally but were unable and CU won the set  25-19.

NEXT UP: Colorado hosts Arizona State on Saturday, Nov. 18, at 7 p.m.. The match will be livestreamed on Pac-12 Plus and livestats are available.

“Obviously, we’re very happy with the win. It’s not very often that you get a sweep in the Pac-12, especially on back-to-back weekends. It’s nice to only play three instead of four or five. I thought it was a very good performance by us. I think we were a little rough in the passing lanes from time to time but, we kept our composure towards the end of each set. I thought we served well. We won a lot of scramble plays on defense which was good to see. Again, Brynna De Luzio ran the offense well. Both of our left scored a lot. Joslyn Hayes was fantastic. It’s tough to find a lot to complain about from this match. “

On the defensive play against Arizona

“Their starting center was injured, so they went in and out of a 5-1 and a 6-2. They just didn’t have an opportunity to get into a rhythm. If you noticed, they had players going in and out. It’s tough to get into a rhythm that way. We set up our blocks particularly well, especially on the right side. The left’s hit zero or close to it, so that’s our right-front block setting really well. Frankie Shebby had some really acrobatic digs, she’s a fantastic defender when she puts her mind to it. I thought she kept some plays alive that we were able to capitalize on. Hopefully we’ll play that level of defense tomorrow.”

On the improvements since Colorado’s win at Arizona last month

“On the road, it’s always tough. Beating anyone on the road whether it’s 3, 4, or 5 sets is an accomplishment because everyone in this league is good. They’re all especially good on their home court. That being said, I think we’re a much better team now than we were a month ago. We’re playing with a lot more confidence. Our middles are doing a great job of following the game plan. They’re also closing blocks. We’ve been starting to get more contributions offensively. Sometimes you’ll notice it’s Anna Pfefferle‘s night, sometimes it’s Naghede Abu‘s night, some nights it’s Joslyn Hayes, then whosever turn it is, they’re coming up big. That’s been good to see. As we move forward, we’re going to need contributions from everybody to finish this season where we want to be.”

On getting the younger players in the game

“We have a lot of talented kids on our bench. Emily DeMure played a great match against Washington a couple of weeks ago. She’s been having some good days in practice. I look for opportunities to get her in so that she’s comfortable when she goes in during times that it really matters like she did against Washington. She played fantastic. We probably should have got her in a little bit more. Taylor Joachim came in and played opposite. She didn’t have a lot of attempts but her touches were all positive. Stephanie Shadley is a fantastic player, when her number is called she comes in and serves and defends really well. Our bench is going to be key to us somewhere down the line in the rest of our matches. I’ll make sure that they’re ready.”

On the possibility of an NCAA tournament-berth

“It’s tough, you try to toe-the-line. We’ve talked about the tournament but we talk about our goal. Our goal is to host the first two rounds. In order to do that we need to win our remaining matches in the Pac-12. We have that end goal in sight but we talk about each match being really important. Beating Arizona is the same as beating Arizona State, California, or Utah. There’s no room for error and we understand that. We go into every match looking to play our best.”

The Cats had nine blocks in the loss, outblocking the Buffaloes 9-7 in the match. Colorado, though, had the edge offensively. CU notched 38 kills on .278 hitting while UA managed 31 on .120 hitting.

Devyn Cross had five kills and five blocks in the match while Elizabeth Shelton had four and four.

Junior setter Mackenzie Hernandez, starting her first career match for the Wildcats in place of injured Julia Patterson, had 21 assists, five digs and an ace in the match.

The Buffaloes, who hit .290 in the opening set, broke away late, scoring eight of the final 12 points to secure a 25-20 victory in the first set.

Dahlke posted five kills in the second, but they would not be enough as the Buffs took a 2-0 lead in the match with a 25-20 victory in the second.

Colorado closed out the match with a 25-19 victory in the third.