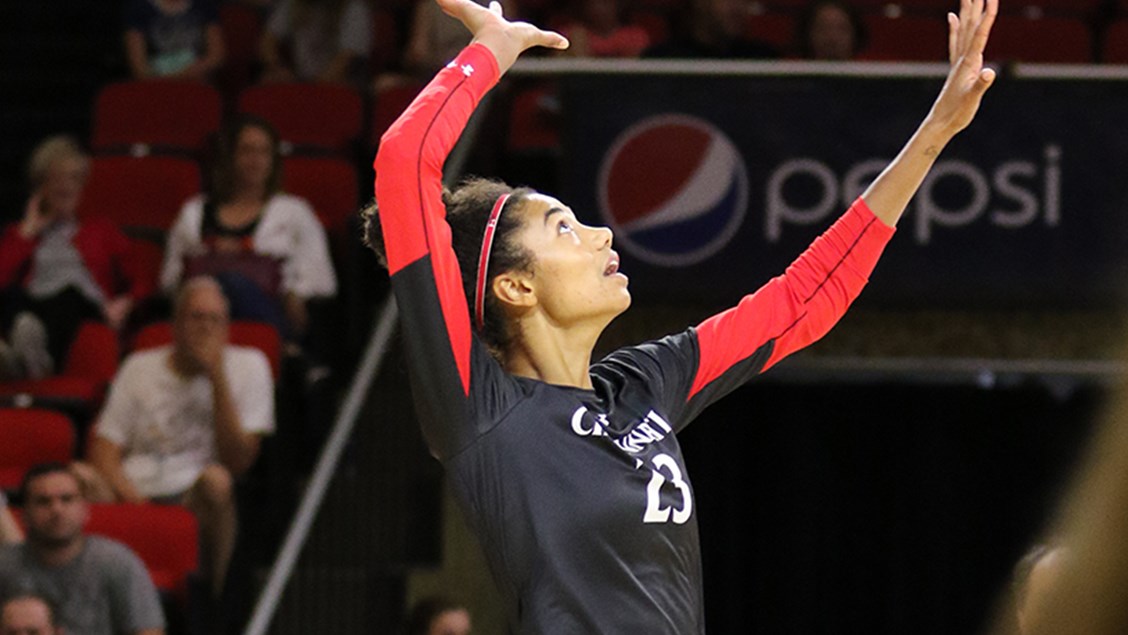 The American Athletic Conference has announced the winners of the league’s weekly volleyball honors for the week ending on September 2, Cincinnati's Jordan Thompson and USF's CC Clausen.  Current Photo via Cincinnati Athletics

PROVIDENCE, R.I. – The American Athletic Conference has announced the winners of the league’s weekly volleyball honors for the week ending on September 2.

Thompson had an outstanding week, guiding Cincinnati through wins over No. 25 Colorado State, TCU and Florida State. She was named the Colorado State Tournament MVP after averaging a conference-best 6.57 kills per set, while hitting .333 and earning three double-doubles. Her line also included 3.07 digs, 0.50 services aces and 0.50 blocks per set. She hit .364 on Saturday with a 31-kill performance in a 3-1 win over Colorado State, setting an American record for four-set matches. She returned to the court later in the day, recording 29 kills, 19 digs and a .294 hitting percentage in a 3-2 win over TCU. She reached the 30-kill mark again on Sunday, knocking down 32, while hitting .343 with four service aces and 10 digs to pace her team to a second-straight 3-2 win over Florida State.

Clausen averaged 6.57 digs per set and a .934 reception percentage through a 2-1 weekend in Baton Rouge, Louisiana, to lead all defensive specialists across the conference. She was named the Tiger Classic Best Defender for her performance. She bumped 34 digs against Duke before pacing her team to a pair of five-set wins over Texas A&M Corpus Christi and LSU. She recorded 28 digs against the Islanders and 30 against the Tigers. The Bulls are 4-0 in five-set matches this year.

Pingel was an essential component to the Knights’ defense against challenging competition this weekend, which included a pair of top-10 opponents. She averaged 5.27 digs per set, reaching double-figures in each match, including a weekend-best 24 against No. 7 USC in UCF’s 3-1 victory. She also bumped 22 versus No. 4 Florida and 12 against Louisville, which received votes in the latest AVCA poll.

Parker contributed to both sides of the floor, recording a pair of double-doubles through a 3-1 week. She led the team with 52 kills, averaging 3.47 kills per set. She also totaled 35 digs (2.33 per set) and had eight blocks. Parker registered 16 kills and 16 digs in a 3-1 win over Iona and 18 kills and 10 digs against Syracuse.

Krebs played a major role in in Houston’s 5-0 week, as the Cougars are off to their best start since 1987, with an 8-0 record. She was named the Sawyer Camillo Memorial Classic MVP after averaging 5.44 assists per set, while helping the team hit over .300 in three matches. She recorded a season-high four service aces and 26 assists at Louisiana. Krebs earned her first double-double of the year against Sam Houston State with 25 assists and 12 digs.

Heidelberg recorded two double-doubles this week, tallying 12 kills and 21 digs against Wofford and 16 kills and 18 digs against Georgia Tech. She also earned a spot on the Georgia Tech Invitational All-Tournament team, as the Green Wave went 3-2 through the week. She averaged 4.53 digs and 2.60 kills per set with five service aces and five blocks.