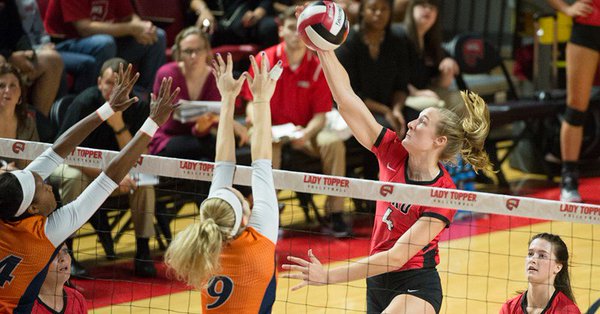 BOWLING GREEN, Ky. – WKU senior Rachel Anderson became just the third player in Lady Topper Volleyball history to record 400 career blocks on Friday night as the Lady Toppers fell to UAB in four sets. The Blazers took down the Red and White by scores of 25-22, 25-23, 17-25 and 25-17.

“We knew UAB was a talented team and they’re physical and their experience is one of the things that worried us on the front end is they got a lot of juniors and seniors out there on the court,” head coach Travis Hudson opened. “We’ve seen this coming for a while from our team. We have not played good volleyball in the past three weeks. We have not prepared properly to be in a position to win these kinds of matches.”

Set one opened with the Lady Toppers scoring the first three points before UAB worked its way ahead and hit double digits first at 10-9. WKU led 16-15 following a Kayland Jackson kill but three-straight errors gave UAB a two-point lead and forced the Lady Toppers to call for a stop. Out of the break, Rachel Anderson and Taylor Bebout each found the floor for kills to even things at 18-18 but UAB would tally the next three points to put the set out of reach and ultimately take a 25-22 victory.

In the following set, neither side led by more than two points until the Lady Toppers took a 15-12 advantage out of a timeout. WKU pushed that lead all the way to five points at 17-12 before the Blazers scored seven of the next eight points to take a 19-18 lead. UAB pushed ahead again for a 23-20 lead before WKU answered with the next two points and was able to fend off a couple set points but UAB closed the door with the 25-23 second-set win.

Out of the break, WKU produced its most efficient offensive frame as the Lady Toppers operated at a .257 clip. The Red and White notched a match-best 66-percent sideout rating to help secure a 25-17 victory and avoid its first conference sweep in Diddle Arena since 2010. The Lady Toppers held UAB to a -.025 hitting clip in the frame and a 45-percent sideout mark.

UAB responded in the fourth set by opening a quick 6-1 lead. WKU began chipping away at the deficit soon after and pulled within 11-9 and 12-10 before the Blazers answered with a 7-0 run. At match point trailing by 11, WKU tallied four-straight points before UAB ultimately claimed the match with a 25-17 fourth set win.

Sophia Cerino led WKU with 10 kills on a .304 hitting clip while adding three of the Lady Toppers’ eight aces. Hallie Shelton also contributed a trio of aces along with six digs, four kills and an assist.

With her first two blocks in the match, Anderson moved into third all-time on WKU Volleyball’s career blocks list. Her third block made her just the third-ever Lady Topper to register 400 career stuffs.

“She’s been a stat stuffer for her whole career – she’s had a tremendous career and her offense often outshines what she’s doing on the defensive side,” Hudson shared of Anderson’s milestone. “But she’s been an improved blocker throughout her career and has turned into one of the better blockers in Conference USA.”

Lauren Matthews also added four blocks in the contest while contributing nine kills on the night.

“This team’s just gotta find itself,” added Hudson. “We’re young and it’s been a long, hard grind for them and I talked before the match about being worried that his team was gonna wear them mentally a little bit. We have eight matches left to find ourselves a little bit – we’re not playing good volleyball and we haven’t been playing good volleyball for the last few weeks. We didn’t play at a different level tonight, we just got a different result.”