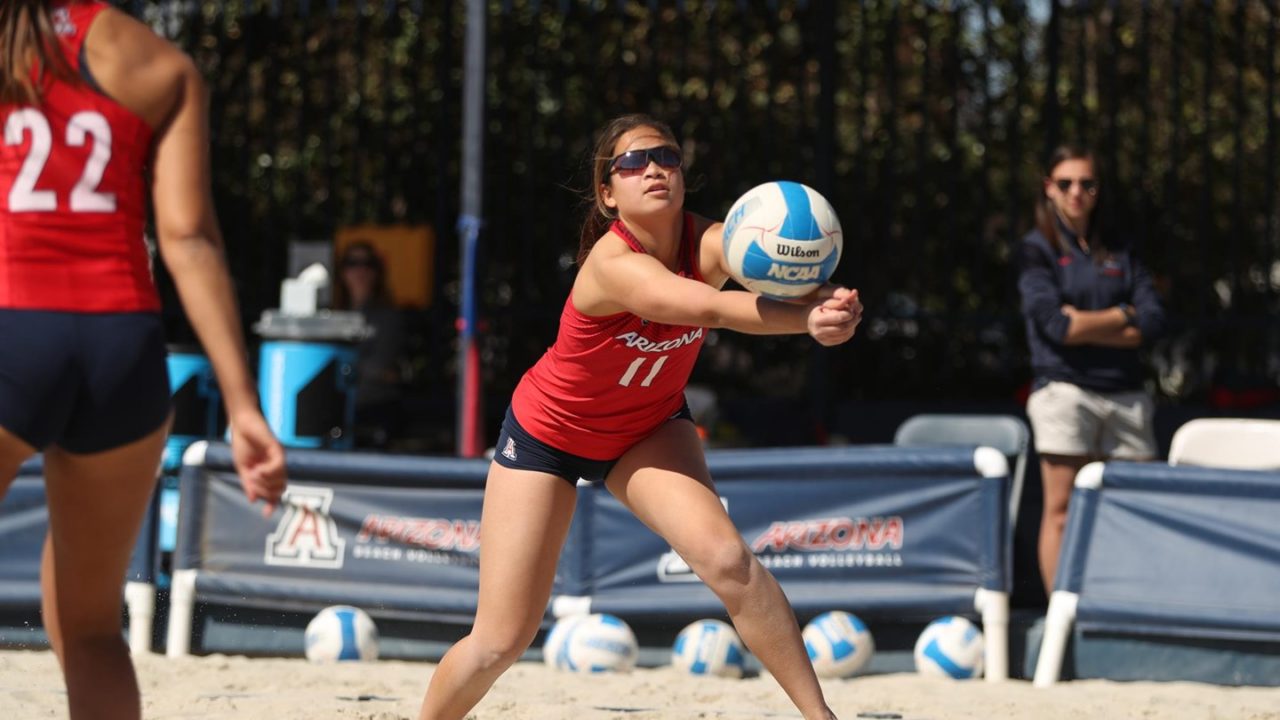 Hawaii's Emily Maglio and Ka'iwi Schucht boosted their win streak to a record 17 matches as the Rainbow Wahine went 3-0, while Arizona's Jonny Baham and Brooke Burling led the Wildcats to an upset win over No. 14 Cal and a 4-0 mark on the weekend.  Current Photo via Arizona Athletics

Rain and lightning cut the Seminole Beach Battle short on Saturday, narrowing the tournament slate to just two matches. No. 11 Georgia State bested UNC Wilmington and No. 18 Florida Atlantic edged TCU 3-1 in a match called early due to lightning, before the rest of the schedule was cancelled.

Eighteen other matches featuring Top 20 teams were played across the country from Louisiana to Arizona to California and even Hawaii.

Ranking held in 17 of those contests, with No. 15 Arizona edging No. 14 California 3-2 as the lone exception.

No. 3 Hawaii notched three victories at its own Queens Cup in Honolulu, topping No. 16 Loyola Marymount and Utah 5-0 and Washington 4-1, to move to 26-3 on the year and extend its school record win streak to 21 matches.

Also breaking records on the island were Emily Maglio and Ka’iwi Schucht, who boosted their win streak to 17 matches, snapping a tie for the previous mark at 14. The record-setting 15th victory was not without trial as the duo played three deuce sets with two going to extra points in the day’s opener against Utah’s Barton/Anae.

No. 8 LSU notched a pair of victories at the Green Wave Invitational up the road in Metairie, Louisiana, downing No. 12 Grand Canyon (4-1) and No. 19 Tulane (3-2). With the victories, played around weather and lightning delays, the Tigers moved to 18-9 on the season and extending its win streak to 11 matches.

No. 15 Arizona and No. 17 Stetson also posted two wins each on Saturday at the Wildcat Invitational in Tucson, Arizona.

The Wildcats bested Colorado Mesa 4-1 before edging past No. 14 Cal. Arizona won on courts 1, 3 and 4 in the upset of the Bears. Freshman Jonny Baham and sophomore Brooke Burling led the way for the Wildcats on Court 3, moving to 4-0 at the tournament and 11-3 on the season.

Stetson topped Arizona State and Vanguard to wrap its weekend in Tucson.