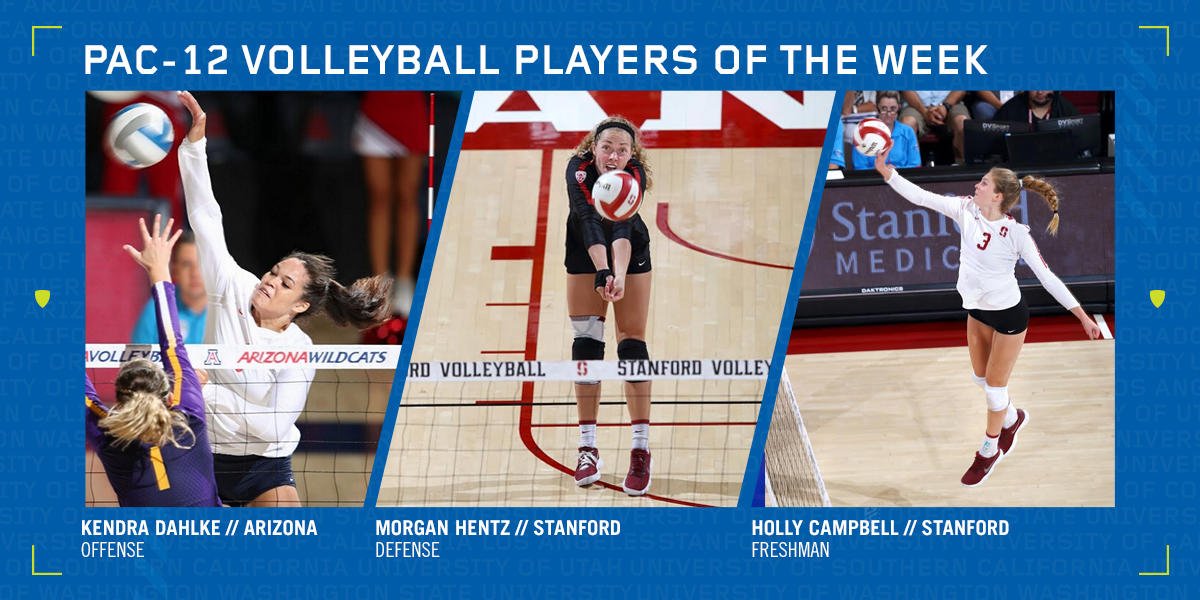 Arizona's Kendra Dahlke was tabbed as Pac-12 Offensive Player of the Week, while Stanford's Morgan Hentz and Holly Campbell were named defensive player and freshman of the week respectively.  Current Photo via Pac-12 Athletics

Congratulations to @k_dahlke, named the @pac12 Offensive Player of the Week!

Morgan Hentz, JR, STAN (Lakeside Park, Ky.)
6.0 DPS, 5 ASST
• Anchored the Stanford defense with 36 total digs and had zero reception errors in sweeps over No. 18 UCLA and No. 13 USC to extend the Cardinal’s nation-best home winning streak to 25.
• Racked up 18 digs in back-to-back matches, registering double-digit digs in all 13 matches this season to the Pac-12 with 4.95 digs per set.
• Moved into fifth place on Stanford’s all-time career digs list with 1,334 career digs.
• Earns her fourth-career Pac-12 weekly honor, her third for the season, and the 110th all-time weekly nod for the Cardinal.

The ⚓️ of @StanfordWVB's defense, @HentzMorgan had 3⃣6⃣ digs and 🚫 reception errors in the Cardinal's sweeps over ranked opponents UCLA and USC.

.@HentzMorgan earns her third @pac12 Defensive Player of the Week honor this season, while Holly Campbell is recognized for the first time.