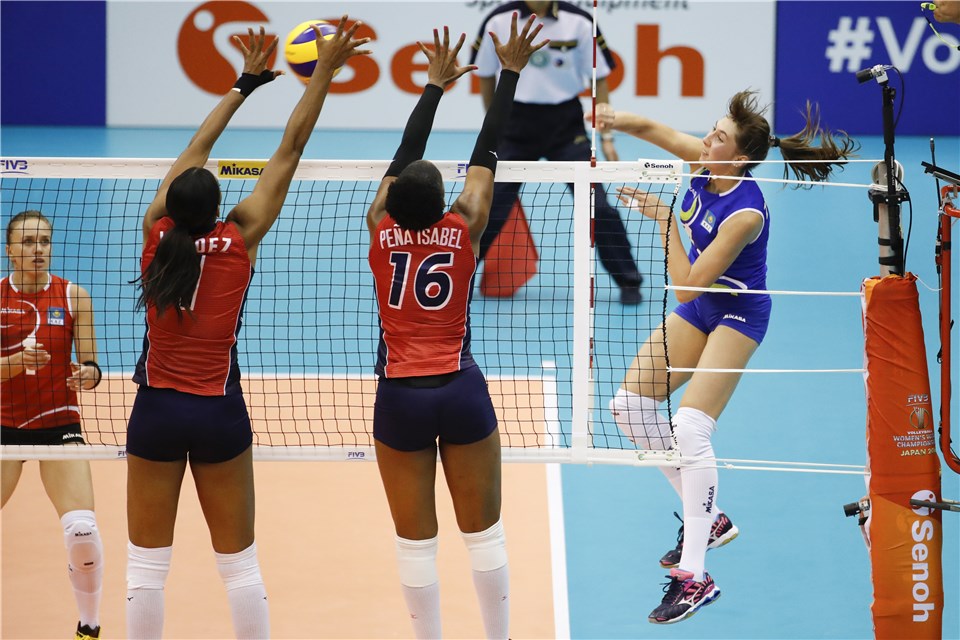 Serbia cruised past Brazil in the most highly anticipated match of Pool D, while the Dominican Republic garnered its first win and Puerto Rico also won in straight sets. Current Photo via FIVB

Serbia cruised past Brazil in the most highly anticipated match of Pool D, while the Dominican Republic and Puerto Rico also won in straight sets.

The Serbians now sit atop the pool at 3-0, while Puerto climbs into a tie for second place with Brazil at 2-1. The win over Kazakhstan was the first of the competition for the Dominican Republic.

“This was our best game of this championship,” Serbian coach Zoran Terzic said. “We were good on attack. We made mistakes on service, but we tried our best to move the Brazil team around with our serves. We must be happy and satisfied with this victory. I think we can still play better.”

Tijana Boskovic led the way for the Serbs with 24 points on 21 kills, two aces and a block. Brankica Mihajlovic (15) and Milena Rasic (12) followed. Mihajlovic scored all 15 of her points on kills, while Rasic turned in eight putaways and a team-best four blocks. Terzic stuck with his starters throughout the match.

Tandara Caixeta was the top scorer for Brazil with nine points, all on kills. Gabriela Braga Guimaraes (8), Fernanda Rodrigues (7) and Ana Beatriz Correa (7) followed. Correa notched three kills to go with a team-best two blocks and two aces. Brazil went 11 deep in its lineup trying to find an answer for the Serbian offense.

Serbia jumped ahead in Set 2 at 8-6 and maintained a slight edge throughout. Boskovic again drove the ship for the Serbians, coming through in the clutch whenever Brazil got close. A four-point edge at 19-15 climbed to seven at 25-18 as Mihajlovic notched her second set-ending putaway.

“Our defense did not work well tonight,” Brazilian captain Natalia Pereira said. “We lost our concentration. We must change our mind in the next matches.”

“We are very happy to get our first win of the tournament,” Dominican coach Marcos Kwiek said. “We had some good points and bad points. We have some work to do on those. We are aiming for a better performance from here one. It is important to use veteran players in a big event like this. They were good on receiving and attacking.”

The Dominicans excelled at the net, besting Kazakhstan 49-33 in kills and 11-5 on the block. The DR also boasted a slight 4-3 edge in aces.

Set 2 was close early with the DR leading 8-7. Defensive miscues by the Kazakhs gave the Dominicans a 16-12 lead at the second technical timeout. Eventually, an ace by De La Cruz capped the 25-15 win.

The Dominicans grabbed a 5-0 lead in Set 3 and cruised to victory to seal the victory.

“They are a good team,” Kazakh coach Shapran Vyacheslav said. “I have watched them play many times. They are physical and tall and better than us. I like their style. They have good technique in service, attack and blocking, which is quite beyond us. This is the reason for the result.”

“They had strong serves, blocks and hits,” Puerto Rican captain Natalia Valentin said. “We adjusted to have more discipline on our blocks and that was key. We are still working to reach our goals and objectives for this tournament.”

The teams were back and forth in Set 1, including ties at 13 and 19. Puerto Rico claimed the win with a final 6-1 run.

Puerto Rico boasted an early 8-6 lead in Set 2, but Kenya turned the tables and went up by three at 16-13 including a kill by Murambi and a block by Edith Mukuvilani. Trailing 19-15, the Puerto Ricans rallied with six of the next seven points before carrying on to a 25-22 victory.

“Our aim today was to qualify for the second round but Puerto Rico stopped us,” Kenyan coach Japheth Bulali said. “We still have two games left. We will try to grow in the coming matches. We led 19-15 in the second set but did not receive well after that. We must get ready for Brazil next. We will go all out against them.”