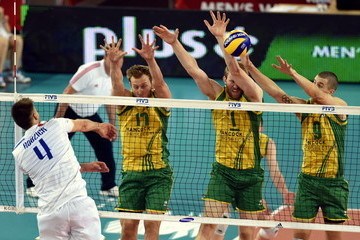 After leading the Italian Superleaga in blocks with 232 over the past 4 seasons, Zingel has made his defensive presence known. Although he is known for his defensive prowess, Zingel has also been able to have a strong impact on offense, with a consistent average of 60%.  In his first press conference with Trentino, Zingel stated “I’m an athlete who relies a lot on his continuity, I do not have many ups and downs; I will make my constancy available already from the first day of training.”

On the Trentino side, head coach Angelo Lorenzetti noted “I strongly wanted Zingel to be part of our team because I think he’s an high-level central-hitter: every time he has been one of my opponent i reminded my strikers to avoid to attack on his hands, as he’s always good at blocking.”  After being awarded the Best Zone 3, or middle blocker, in the Superleaga during the 2015/2016 campaign, Zingel will be a strong piece for a Trentino team hungry to win the league.

“Now I’ve at my disposal three strong interchangeable central-hitters; for this reason, we’ll have important advantages both in matches and during trainings” Lorenzetti noted.  Zingel will compete with Eder Carbonera and Jan Kozamernik for playing time for the upcoming season.