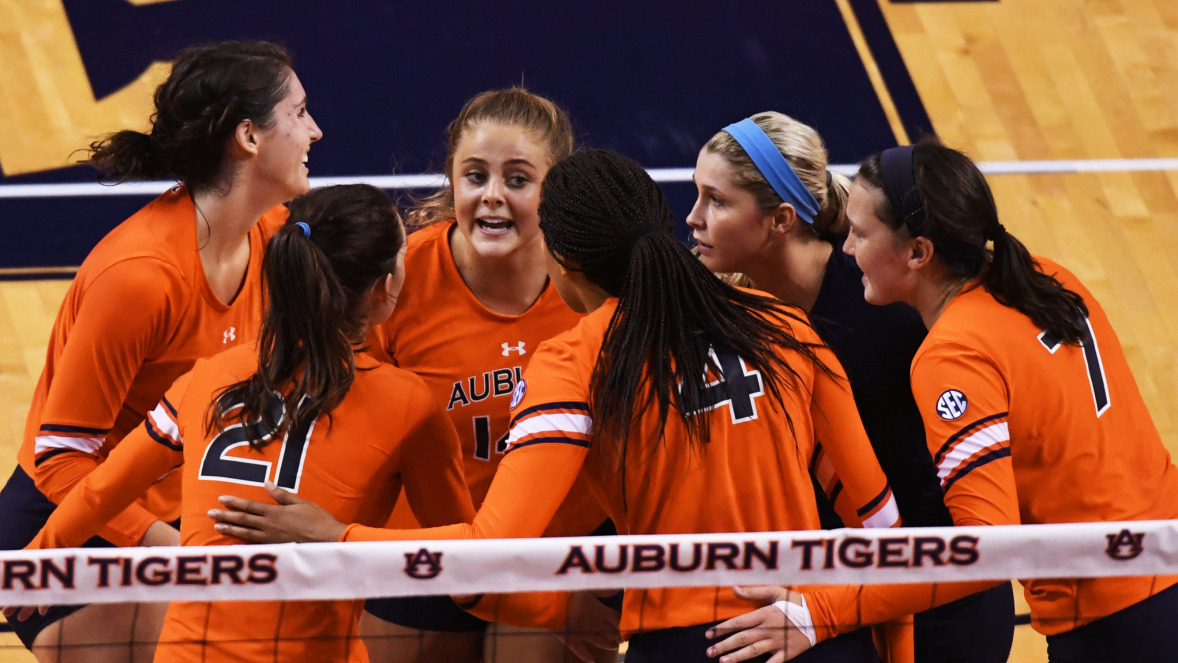 Senior middle Beth Nordhorn and redshirt junior outside Taylor Leath paced UNC with 12 kills apiece, but with very different efficiencies. Nordhorn hit at a team-best .417 clip and managed three blocks. Leath hit -.020 committing more errors (13) than kills, but did help the team with a double double, adding 13 digs to her kill total. Sophomore outside Taylor Borup followed with 10 putaways. Sophomore libero Mia Fradenburg pulled up a team-best 24 digs and served up a team-leading two aces. Rounding out a group of four players with double-digit dig totals were freshman defensive specialists Maddie Grace Hough (11) and Sehrena Hull (10).

Auburn snapped a 6-all tie in Set 1 with three-straight points. The Tigers held UNC at bay, using another 3-0 run, capped by a Beasley ace, to stretch the margin to five at 18-13. The TarHeels would not go down easy, turning a 22-17 deficit into a 23-all tie with a 6-1 run. Three kills, a block and a Sydnye Fields ace helped UNC erase the point margin. Reece and Stevenson kept North Carolina from completing the comeback with a pair of kills.

Set 2 featured 17 ties, the first at 1-1 and the last at 22-all. Midway through the teams were knotted at 14-all. UNC gained a 16-14 edge with a Nordhorn kill and Auburn miscue. The teams tied at 17 and traded points over the next 11 serves leadin gto the 22-all tie. The Tigers grabbed its first lead since 6-5 at 23-22 on a Tar Heel service error and stole away the set with help from a UNC hitting error and Jones putaway.

The teams split the first 16 point of Set 3. Auburn scored seven of the next 10 points to go up 15-11. Kills from four different players, including two by White, coupled with a block and UNC miscues accounted for the advantage. North Carolina pulled within one at 18-17 and again at 23-22. A Reece kill put Auburn on the hill at 24-22. A pair of Nordhorn kills saved Tiger match point chances and knotted the score at 24. Auburn had another try at 25-24 after a UNC hitting error. A Nordhorn putaway saved that match point, then a Leath ace and Holly Carlton kill won the set 27-25 for the TarHeels and extended the match.

A 6-0 run turned a 5-all tie into an 11-5 Auburn lead in Set 3. Three UNC errors and a block and kill by Stevenson aided in the rally. The Tigers upped their advantage to seven at 16-9, but UNC scored three in a row to narrow the gap to four on a Carlton ace. Auburn scored five of the next six to increase its lead to eight at 21-13 as the Tar Heels gave away four points on errors. A Reece kill gave Auburn its fourth match point attempt of the night, but it would take three more tries to finish the job. UNC thwarted the first three chances with a service error and two blocks, but committed a serving miscue of its own to close out the loss.