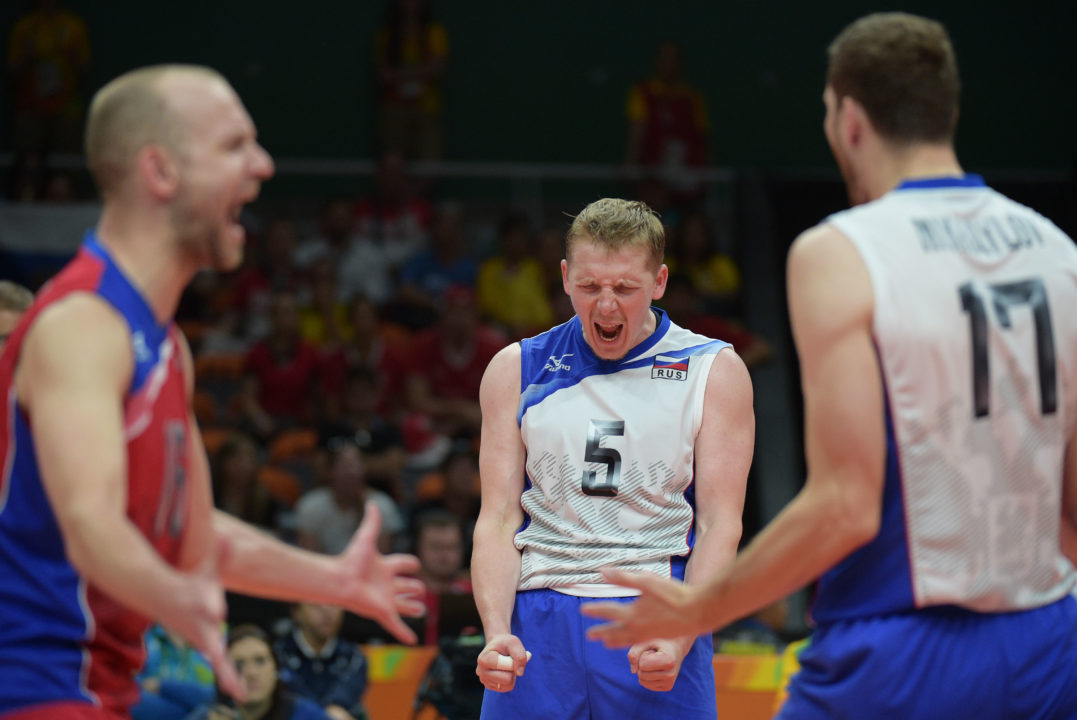 A dominant effort from the Russian men has earned them a berth in the gold medal match of the European Championships in Krakow, Poland. The Russian team has not stood atop the podium at a major tournament since 2013, but will have that chance when they take on Germany, who earlier in the day earned their first berth to the gold medal match of the European Championships. Behind a balanced offense led by setter Sergey Grankin, the Russians defeated Belgium 3-0 in straight sets by the scores of 25-14, 25-17 and 25-17.  Dmitrii Volkov led the Russians with 18 points on 12 kills, 4 blocks and 2 aces. Maxim Mikhailov chipped in 14 points on 10 kills, 3 blocks and an ace while Ilia Vlasov added 8 points.

Set one started with a back row kill from Grankin followed by a solo stuff from Volkov which gave Russia the first two points of the match. After an ace from Yuri Berezkho, Belgium was forced to call an early timeout. It did not slow down the Russians as a triple block awarded them their first point before Belgium scored their first. An ace from Mikhailov gave Russia an 8-2 lead at the first technical time out. Mikhailov continued his dominant first set with a kill and back to back aces as the lead grew to 18-9. Maksim Zhigalov subbed into the match and delivered and ace to bring the Russian to a set point. The set ended on a Belgian missed serve. Mikhailov finished the set with 4 kills and 2 aces.

A Volkov kill and block gave Russia their first lead of set two and they never looked back. Berezkho delivered a bruising kill that gave Russia an 8-6 lead at the first technical timeout. A block and a Berezkho ace gave Russia their first four point lead of the set. Although Belgium got within 2 points at 12-10, a back row kill from Berezkho and back to back hitting errors opened back up a 5 point lead for the Russians and forced Belgium to call a timeout. The timeout seemed to give Belgium the breather it needed as a kill and two blocks closed the lead to four. But the Russians reached 20 first on a kill from substitute Egor Kliuka. The set ended on a hitting error from Belgium.

The third set was much of the same for Belgium as sloppy passing led to a disorganized offense. A Volkov kills opened up a 5-1 lead and forced Belgium into an early timeout. An ace from Artem Volvich and a kill from Mikailov gave the Russian an 8-2 lead at the first technical timeout. Belgium was able to close the lead to 10-7 on a kill from Gert Van Walle, but a huge double block by the Russians opened the lead back up. Tomas Rousseaux tried to keep Belguim close with two kills and tough serving, but Mikhailov blasted back to back kills and added a block as Russia opened up a 16-10 at the second technical timeout and never looked back. Russia closed out the match on a blast from Kliuka.

There were not many bright spots for Belgium in this match as Russia dominated from start to finish. Rousseaux led the Belgian squad with 10 points while Simon Van De Voorde added 7. Belgium will face Serbia for the bronze medal.