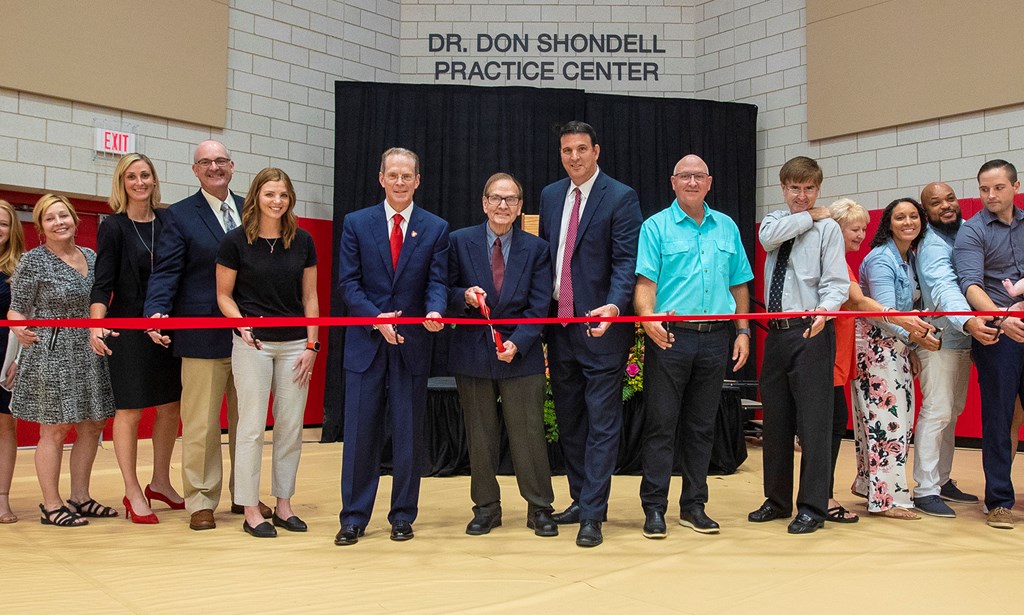 On Saturday, Bal State introduced its 19,000 square foot practice facility with a ceremony including the venue's Hall of Fame namesake Dr. Don Shondell as well as alumni and current coaches.  Current Photo via Ball State Athletics

Back in March 2017, Ball State broke ground on the Dr. Don Shondell Practice Center, a 19,000 square foot facility which would act as a practice venue for the Cardinals’ basketball and volleyball teams.

On Saturday, the school introduced the completed facility with a ceremony including the venue’s Hall of Fame namesake Dr. Don Shondell as well as alumni and current coaches.

Shondell, a 1952 alumnus who started the men’s club team in 1960 and founded the varsity team in 1964 before coaching for 34 years. Shondell’s squads won 20 MIVA titles and earned 13 NCAA Tournament berths while accumulating a 769-280-6 record in his tenure. The 769 wins are the second most in men’s volleyball history and the most in any sport at Ball State.

“Ball State has been my whole life,” Shondell said. “My life started when I came to Ball State and it’s continued ever since then.”

The practice center features two full-size courts which can be utilized for basketball and volleyball as well as a 27-seat study room for meetings and video review. Two meeting rooms also are located on the second floor of the facility. The windows are made of translucent fiberglass to reduce the sun’s glare.

“This has been for sure a dream and a great way to recognize Dr. Don Shondell and the Shondell family for everything they have done for volleyball,” men’s coach Joel Walton, who also played collegiate volleyball at Ball State under Shondell. “Don worked passionately to start the Ball State men’s volleyball program and he’s rallied numerous times to keep the program in existence. Coach’s passion for teaching the game has impacted many people in Indiana, in Muncie, in the United States and the world.”

[VIDEO] Ball State volleyball and basketball took a big step forward Saturday with the ribbon cutting of the Dr. Don Shondell Practice Facility. The building will serve as a new day-to-day home for the four teams while also including an athletic training room and a spot for film study and team meetings. All-Access explores how much Dr. Shondell means to Ball State and how much this honor means to him. #ChirpChirp

Proud day for the Ball State Volleyball Family. Ribbon-cutting ceremony today for the Dr. Don Shondell Training Facility. Thanks to all those who contributed to helping make this remarkable project happen. Dr. Don is treasuring this moment. pic.twitter.com/rhO4838B3I

Excited to announce there is now officially 1️⃣ building on a college campus named after a volleyball coach in America, the Dr. Don Shondell Practice Center is open‼️ It has a 2 court practice facility, film room, training room & 2 meeting rooms!! 🔴🏐 #WeFly #ChirpChirp pic.twitter.com/oIlGMGd8Uz

Today @BallStateSports had a ribbon-cutting for the new Dr. Don Shondell Practice Center. Don, your pioneering spirit and your coaching credentials are respected and admired by many. Thank you for your many years of service to the University. pic.twitter.com/tfziRHCDky

Today, a building is being named after Dr. Don Shondell. This legendary educator knows how to care! He continues to learn and continues to be impactful. Congrats on this historic day!@SteveShondell @DaveShondell @Johnshondell @LindsayShondell @KyleShondell pic.twitter.com/gITxRmJAIR

“@SteveShondell was kind of the mind behind this facility, but fortunately it was named for me!” — Dr. Don Shondell. 😎 pic.twitter.com/lECUJpAcob