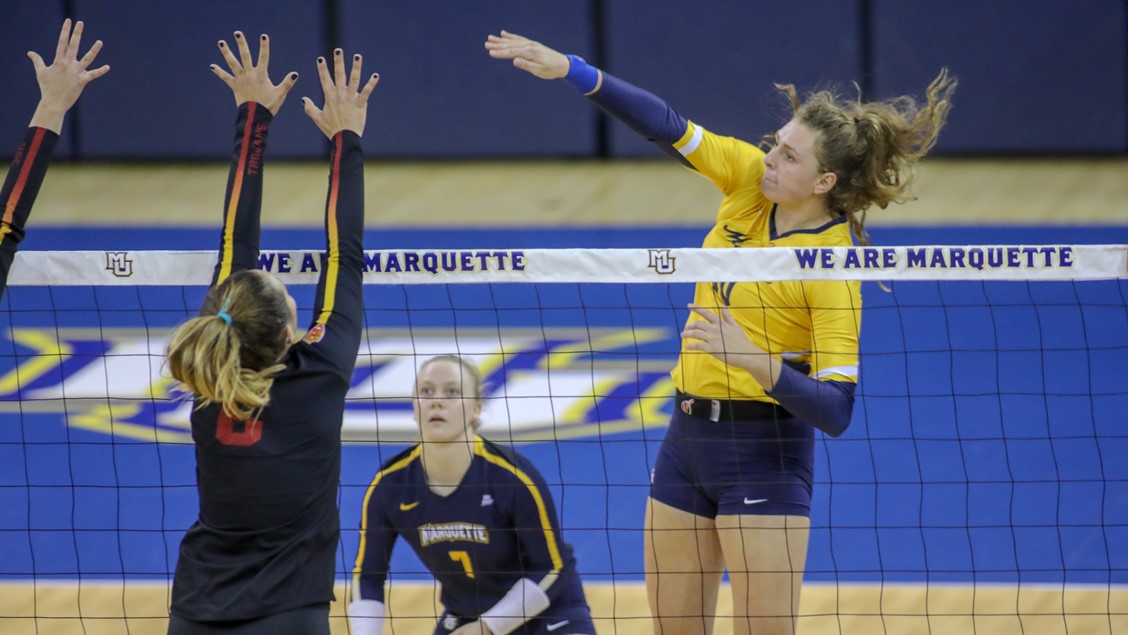 Barber, the Preseason Player of the Year, guided Marquette (24-5, 14-2 BIG EAST) to a pair of three-set victories over the weekend, moving the Golden Eagles to their highest-ever ranking in the AVCA Coaches Poll at No. 17. Cole helped the ninth-ranked Bluejays (24-4, 16-0) defeat both opponents without dropping a set this past weekend to grab at least a share of the regular-season title. Alexakou was a key factor as the Red Storm (22-9, 11-5) swept Seton Hall to clinch a berth in the 2018 BIG EAST Volleyball Championship presented by Jeep.

Barber led the Marquette offense over the weekend, averaging a league-best 6.00 kills and 6.33 points per set, while hitting .410. She recorded a match-high 20 kills along with two digs, and hit .394 as the Golden Eagles won in straight sets at Butler. Her 20 kills is the most in a three-set match for any player in the BIG EAST this season. Barber then added another match-high 16 kills while hitting .429 in a sweep at Xavier. Against the Musketeers she also had four blocks and a dig.

Allie Barber is the #BIGEAST Offensive Player of the Week for the fourth time this season.

She hit .410 and averaged 6.00 kills per set in sweeps at Butler and Xavier. pic.twitter.com/ohsJ2DPWA0

Cole averaged 10.17 assists and 4.00 digs, 1.00 blocks and league-best 0.83 aces per set for the Bluejays, who are now on a 16-match win streak after sweeping both opponents over the weekend. Against Georgetown, she collected 32 assists to go along with eight digs and three blocks. In the win over Villanova, Cole recorded a double-double with a match-high 16 digs and 29 assists, while also adding three blocks.

🏆🏅🎊
Congratulations to Madelyn Cole on earning this week's BIG EAST Defensive Player of the Week award!

Alexakou averaged 4.67 kills and digs per set in the Red Storm’s sweep over Seton Hall. She recorded a double-double with 14 kills and 14 digs, which were both match highs as St. John’s secured its spot in the 2018 BIG EAST Volleyball Championship for the first time since 2012.

Kloth averaged 4.83 kills and 5.08 points per set, which were both second-best in the league over the weekend, while hitting .379. She notched a match-high 15 kills and eight digs in the win versus Georgetown. Kloth then tallied another match-high 14 kills and three digs in a victory over Villanova.

Konovodoff helped Marquette to a pair of wins by averaging 5.17 digs per set, which was second-best in the league this past weekend. She recorded 13 digs and eight assists at Butler, and then posted a match-high 18 digs, along with four assists at Xavier.

Di Maulo collected 42 assists in St. John’s three-set win at Seton Hall. That was almost four more assists per set than the next player in conference over the weekend. She also added five digs and four kills.

Lough led the BIG EAST over the weekend in digs per set, averaging 5.33. She registered 21 digs and a pair of assists in a sweep of Providence. She then tallied 11 digs and four assists in a loss to conference leader Creighton.

Klare averaged 4.57 digs per set as the Musketeers split their weekend matches. She had a team-high 20 digs along with five assists and an ace in a four-set win over DePaul. Klare also recorded a team-high 12 digs, an assist and an ace in a loss to second-place Marquette.