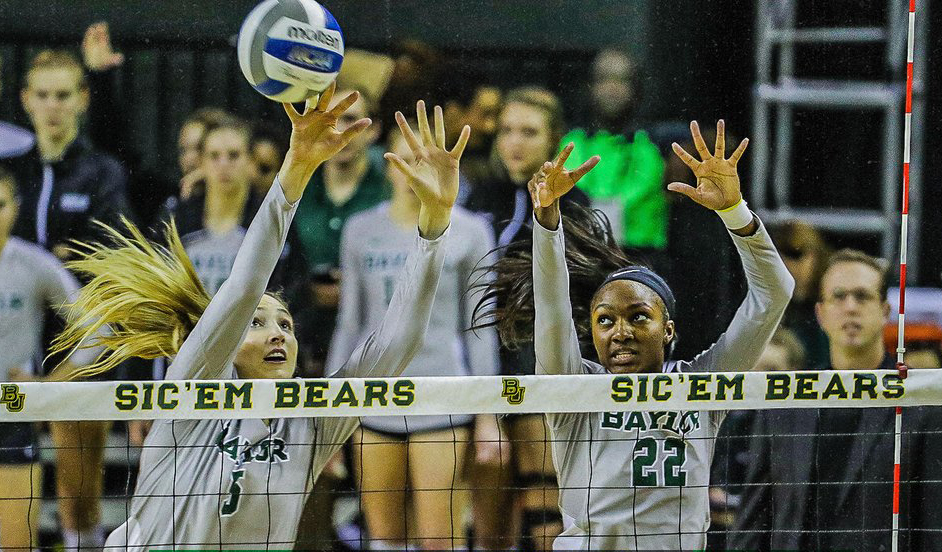 Baylor's Shelly Fanning was a force at the net both offensively and defensively in wins over Iowa State and Kansas State en route to VolleyMob Player of the Week honors.  Current Photo via Baylor Athletics

Baylor’s Shelly Fanning was a force at the net both offensively and defensively in wins over Iowa State and Kansas State en route to VolleyMob Player of the Week honors.

The redshirt junior middle blocker averaged 3.86 kills and 2.43 blocks per set, while hitting .511 in the victories. The Cypress, Texas, native posted 16 kills, nine blocks and an ace while hitting .577 in a four-set win over the Cyclones. She then notched 11 kills and eight blocks, while hitting .429 in a sweep of the Wildcats. For her efforts, Fanning also was named Big 12 Defensive Player of the Week.

Averaged 7.29 digs per set and made good on 97.4 percent of her serve receive chances (37 of 38); posted 38 digs and six assists in a four-set win over Oral Roberts; notched 13 digs in a 3-0 loss to South Dakota; Summit League Defensive Player of the Week

Averaged 13.17 assists, 2.67 digs and 1.50 kills per set, while team in .335 in sweep of Mississippi State and Alabama; posted 34 assists, five digs, four kills and two blocks as team hit .314 against the Bulldogs; added 45 assists, 11 digs and five kills while team hit .350 against the Crimson Tide; downed nine kills of her own on a .750 clip for the week; SEC Player and Setter of the Week

Averaged 3.14 kills and 2.00 blocks per set while hitting .452; tied match record for block assists with 10 vs. Lipscomb; managed 12 kills and 10 blocks for her first career double-double while hitting .360 (12-3-25) against Lipscomb; notched 10 kills and five blocks while hitting .588 (10-0-17) against Jacksonville; Atlantic Sun Defensive Player of the Week