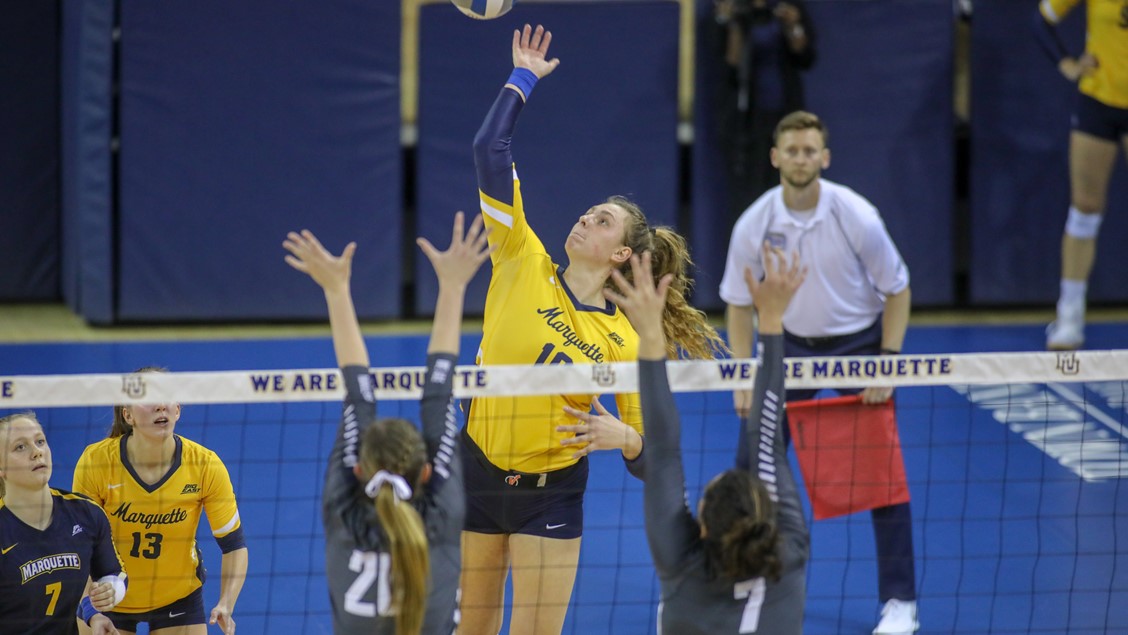 NEW YORK – Marquette’s Allie Barber takes home her third BIG EAST Volleyball Offensive Player of the Week award this season, while St. John’s Amanda Sanabia garners her second Defensive Player of the Week honor in a row. Butler’s Melody Davidson earned the first certificate for the Bulldogs this season, earning the Freshman of the Week honor. No. 10 Creighton remains unbeaten in league play, while No. 19 Marquette improved to 3-1 as both teams added two wins each over the weekend and are 12-4 overall.

Barber helped the No. 20 Golden Eagles to a 2-0 weekend with home sweeps of Georgetown and Villanova. She averaged .397 hitting with 4.67 kills per set. Barber also accumulated 4.67 points and a dig per set. The junior currently leads the league overall in kills per set at 4.53 and eclipsed 1,000 career kills against Villanova. This is the third Offensive Player of the Week award this season for the BIG EAST Volleyball Preseason Player of the Year.

Junior @allie_barber_ was selected as #BIGEASTvb Offensive Player of the Week for the third time this season! Congrats Allie!https://t.co/e6md7R4Wdl pic.twitter.com/DjBir5a5VR

Sanabia collects her second consecutive Defensive Player of the Week award after the Red Storm went 1-1 over the past week with a five-set loss at Villanova and a sweep of Seton Hall. The junior led the league in digs per set with 7.38 over the week. She recorded a career-high 34 digs against Villanova, which is a match high in conference play so far and tied for third-most in a match overall this season. Sanabia also helped hold her opponents to .149 hitting.

Congratulations to Amanda Sanabia for being named BIG EAST Defensive Player of the Week for the second-straight week!

The Bulldogs went 1-1 over the weekend after taking No. 10 Creighton to five sets and sweeping Providence both at home. Davidson averaged .444 hitting over the two matches, which was third-best in the league, along with 2.69 points per set. She also tallied 16 kills for 2.00 per set, and her 10 total blocks were best for a rookie and tied for second-most overall in the BIG EAST over the weekend.

Lilly helped hold Creighton to .168 hitting while recording her second double-double of the season with 11 blocks and 10 kills against the Bluejays. She averaged 3.50 points per set over the weekend, along with 1.88 blocks per set which was a league best over the past week.

Helping No. 10 Creighton stay unbeaten in BIG EAST play over the weekend, Kloth averaged a league-best 4.88 kills and 5.69 points per set. The senior averaged 2.50 digs per set to go along with .290 hitting. She also added six blocks and a pair of aces.

Konovodoff collected five service aces to lead the conference over the past week. She averaged 5.00 digs per set with 13 versus Georgetown and 17 against Villanova. The sophomore also tallied five assists and helped hold Marquette’s opponents to .181 hitting.

With an average of 5.27 digs, Lough helped Villanova go 2-1 over the past week and held its opponents to .153 hitting. She had 31 digs in a five-setter against the Red Storm, and also added 12 assists throughout the three matches.

Adams led the league in hitting percentage at .692 as the Musketeers went 1-1 over the weekend. She had a total of 19 kills, 11 against Providence and eight versus Creighton for an average of 3.17 per set, while collecting three blocks and an assist.