Pool B: China, Italy and Turkey Sweep Past Competition 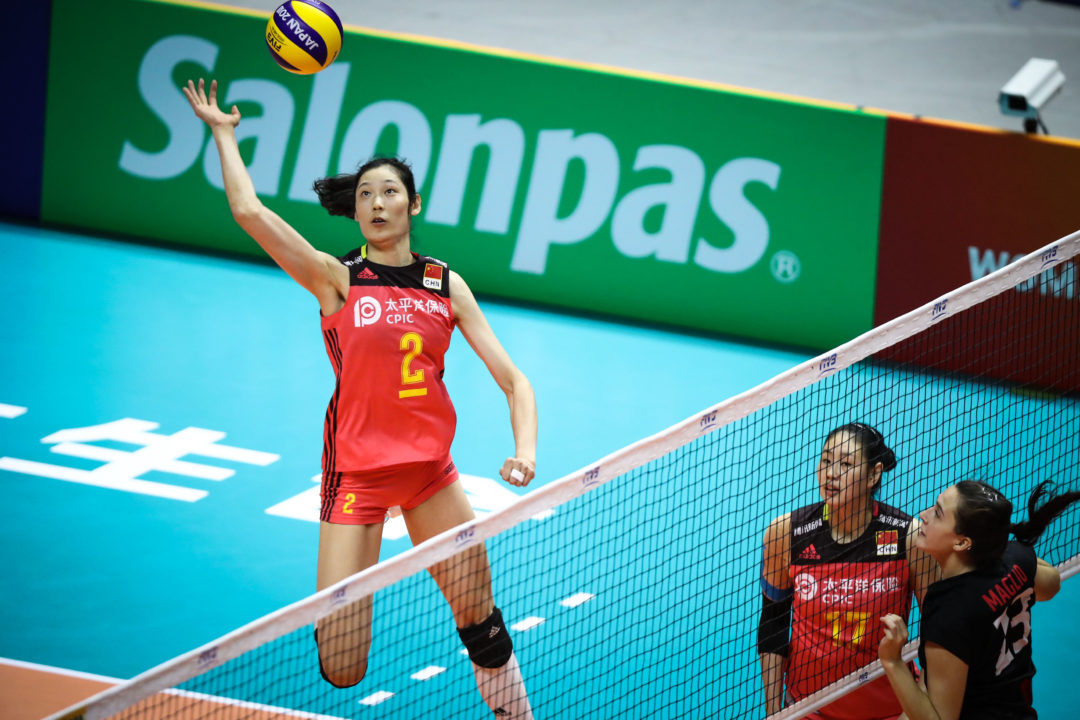 7th-ranked Italy downed 25th-ranked Cuba, 3-0, to earn its 7th win in the last 9 meetings against the Cubans, who are on a 10-match losing streak in world-level competitions.

The Italians used a strong block (8 to 3) and 4 service aces to secure the win and move to 3-0 in Pool B of the 2018 FIVB World Championship, while Cuba committed a detrimental 21 errors and fell to 0-3.

“Today, our aim was to get a good result and we were able to do that, so I am satisfied,” Italy head coach Davide Mazzanti said. “We were focused on stable play; it was not easy, but we were able to win. Our goal is to get to the Final 6.”

The Cubans switched up their lineup, bringing in left-handed attackers Kitania Medina and Ivy Vila in the second set. It had a positive effect, however, was not enough to disrupt Italy’s match plan.

Paola Ogechi Egonu and Anna Danesi guided Italy to its win with 15 and 11 points, respectively, in the sweep. For Cuba, Ailama Cese Montalvo and Jessica Aguilera Carbajal each recorded 9 points.

12th-ranked Turkey rebounded from its day 2 loss to top-ranked China with a dominant 3-0 victory over 17th-ranked Bulgaria on Tuesday inside Hokkaido Prefectural Sports Center.

“I am very happy because this match was very important,” Turkey head coach Giovanna Guidetti said. “We have a lot of respect for Bulgaria. We’ve played them in friendlies and had trouble against them, and today they didn’t make too many mistakes. They didn’t make too many unforced errors, so we had to fight for every point. Our block and defense worked very well because their attack percentage was very good, my setter did a good job and our middle blockers were excellent, so I think it was a pretty good match from our side.”

While Guidetti was happy with his team, Bulgaria head coach Ivan Petkov was embarrassed by his team’s performance.

“We want to say sorry for the way we played,” Petkov said. “This was a bad game for us. We have to think about the next match. Really, this match was very bad. I don’t know what to say, except sorry.”

Turkey, which held a 12 to 8 blocking advantage in the win, were led by Meryem Box and Eda Erdem Dundar who contributed 17 and 13 points, respectively.

Top-ranked China moved to 3-0 in Pool B of the 2018 FIVB World Championship with a sweep of 19th-ranked Canada on Tuesday night.

The Chinese led the Canadians in nearly every statistical category, including blocks (10 to 8), service aces (6 to 4) and sets (27 to 6). Canada committed 19 errors in the match, while China had 10.

Though the result was one-sided, the Chinese are always looking to improve.

“In this World Championship every team is really strong, so it’s not a matter of strengths or weaknesses but more about the different levels of experience they have,” China head coach Lan Ping said. “Today, it was a hard game for us and we learned that we need to improve ourselves, especially how we react to the ball. It’s a long championship so I want to try to use a lot of players in different situations.”

China played 12 of 13 available players on its roster in the 3-set victory.

Ting Zhu was the top scorer for China with 14 points, followed by Xinyue Yuan and Gong Xiangyu who contributed 10 and 9 points, respectively.

The only Canadian in double figures was Kiera Van Ryk, who notched 11 points, while Emily Maglio added 9.