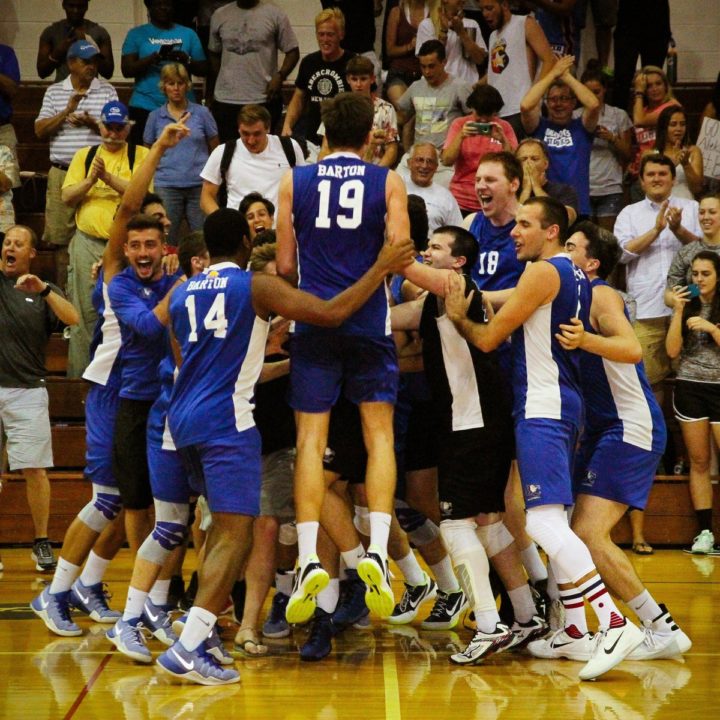 Senior opposite Robert Poole posted a team-high five kills for UMO, but eight other players registered at least one putaway. Junior outside Brad Monaghan (4), freshman middle Luke Visgitis (3), senior opposite Bret Rutledge (3) and freshman middle Jerell Rogers (3) followed. Rogers notched a team-leading four blocks, while Poole served up four aces. Visgitis was the only Trojan to hit .200 or better that had more than five swings.

It Was Over When: Set 3 was a runaway from the start as Erskine quickly built a 10-4 lead. A kill and an ace by Friddle and two putdowns each by Braceros and Sullivan put the Flying Fleet up six. From there, Mount Olive would get no closer than five, last at 14-9. Erskine poured it on down the stretch with a final 11-1 run. Four hitting errors coupled with two kills and a block by Sullivan guided the team down the stretch.

Key Stats: A stellar offensive effort and tough serve led Barton to victory. The Bulldogs hit at a .423 clip and served up 10 aces in the win. Emmanuel put up impressive offensive numbers as well, notching a .308 hitting effort, but trailed in kills (41-30) and aces (10-3). Both teams tallied three blocks. After starting the match at a blazing .583 clip, Barton cooled, hitting .391 and .292 in the remaining sets. Emmanuel loomed around .300 the entire night.

Stat Leaders: Sophomore right side Angelos Mandilaris and junior outside Aleksa Brkovic turned in 14 kills apiece to lead the Bulldogs, while hitting .632 and .385 respectively. The duo also accounted for five of the team’s 10 aces with Mandilaris tallying three to go with a team-high two blocks, while Brkovic added two aces. Junior middle Justice Lord chipped in five kills and hit .714 (5-0-7), while junior outside Vasilis Mandilaris also turned in five putaways.

It Was Over When: The Bulldogs scored eight of the first 10 points in Set 3, including two kills and an ace by Brkovic, and never looked back. The Lions chipped away, cutting the margin to three three times, last at 14-11. Four Barton errors and two kills each by West and Melenciano kept Emmanuel in the game. The Bulldogs scored seven of the next 10 to pull away at 21-14. Three Barton miscues let the Lions back in at 22-19, but the visitors scored three of the final four, capping the match with a kill and an ace by Noah Harmon.

Key Stats: It was an up and down match for Coker, but in the end, the six Cobras on the floor outdid Alderson Broaddus, including a 9-4 lead in aces in the five-set win. Coker hit .275 or better in the three sets it won, but did not crack .100 in the other two. The Cobras also tallied 10 more kills (60-50) in the win, which saw both teams put up 10 blocks.

Stat Leaders: Junior right side Joao Victor Santos downed a match-high 24 kills and put up seven blocks and two aces for the Cobras. Juniors Stephen Porras (16) and Gabriel Castro (15) rounded out the offense. Porras rounded out a double-double with 10 digs, five blocks and three aces, while Castro chipped in two aces.

It Was Over When: Coker jumped ahead 4-1 in Set 5 as Porras, Casto and Santos notched kills. Alderson Broaddus tied it up at 4 and 5, before the Cobras pulled away for good. Coker scored six of the next eight, including two kills and a block by Santos, to take an 11-7 lead. Putaways by Cabrera and Sands cut the margin to two at 11-9, but the Battlers could not hold off a final 4-2 Coker push. A Castro kill clinched the win.

Key Stats: King dominated the net in the sweep, outdoing Belmont Abbey .319 to .056 in hitting efficiency and 11-5 in blocks. The Tornado also owned a 34-29 lead in kills. Each team managed one ace.

Stat Leaders: Senior outside Jeff Sprayberry and senior right side Kiel Bell posted 10 kills apiece, while senior middle Adrian Besson and junior middle Jon Wheaton chipped in five each to make up most of the King offense. Bell hit at a team-high .444 clip and added six digs, while Besson put up a team-leading six blocks. Wheaton served up the team’s lone ace.

It Was Over When: Belmont Abbey took an 8-5 lead in Set 3 as four different players notched kills, but could not hold off a Tornado rally. King knotted the score at 12 with help from three Sprayberry kills and broke away with a final 13-5 run after that as the Crusaders made six errors and Besson put up two blocks. Belmont Abbey stopped the first King match-point try, but notched a service error to cap the match.

Key Stats: King won all facets of the game in a sweep of Bluefield, including a .230 to .048 advantage in hitting percentage and 38-24 lead in kills. The Tornado also managed a 5-1 lead in aces and 7-4.5 edge in blocks. Bluefield never hit better than .100 in the match, while King hit .250 or better in each of the first two stanzas.

Sophomore outside Alberto Chiaparini (9) and junior middle Lesharo Clark (7) led the way for the Rams. Chiaparini paced the team with a .172 hitting effort, three blocks and an ace, while Clark hit at a .111 clip.

It Was Over When: After trailing 4-2 in Set 3, King found its footing with a 7-2 run, including three Bluefield miscues. The teams tied at 10, the first of five knotups, before Bluefield managed an 18-17 edge. The Tornado capped the match with eight of the final 11 points, including four Ram miscues.