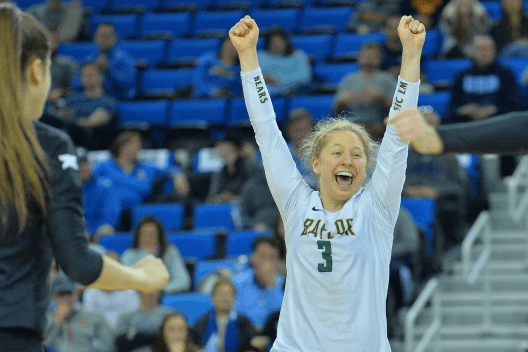 Jana Brusek led the Baylor Bears to 53 digs to hold UC Santa Barbara to a -.009 hitting percentage in sweep of the Gauchos. Archive Photo via Baylor Athletics

WACO, Texas – Baylor volleyball ended the weekend with a win on their home court at the Ferrell Center, defeating UC Santa Barbara in straight sets to close out the Hampton Inn & Suites Waco North Baylor Invitational on Sunday, August 27th. That makes this the first season where the Bears have started 3-0 since 2012.

The Bears’ redshirt sophomore Shelly Fanning tapped into the top 4 best attacking percentages of all time (min. 10 kills) on a hitting percentage of .765 with 13 kills. Yossiana Pressley also put down 13 balls on the day. Sydney Bast led the Gauchos with 9 kills.

Hannah Lockin had an impressive 33 assists for Baylor, while Lexi Rottman recorded 21 for UC Santa Barbara.

The Bears out-dug the Gauchos 53-48 while holding UC Santa Barbara to a -.009 hitting percentage as a team. Jana Brusek led the Bears in digs with 13, while Aniah Philo scooped up 12. The dig leader for the Gauchos was Emelia Petrachi with 16.

Freshman Yossiana Pressley contributed 12 kills on a .267 attack effort in the sweep. Hannah Lockin dished out 33 assists to lead the Bears at the setter spot.

BU got off to a shaky start as head coach Ryan McGuyre was forced to call an early timeout, trailing 7-4. The Bears turned up the intensity and rattled off six of the next seven points to take the two-point advantage. Pressley’s seven kills in the first set led BU to the 25-19 win.

The Bears kept the momentum as they jumped out to a 7-3 lead that they would never relinquish. Fanning ended the second frame with three straight kills to give Baylor the 2-0 advantage.

Pressley led the Bears with two early kills in set three, and seniors Camryn Freiberg and Tola Itiolaset up match point with a block.

STAT OF THE MATCH
.765 — the new fourth-best attack efficiency in a three-set match (minimum 10 kills) set by Shelly Fanning.

TOP QUOTE
“We got (Shelly) in a position where she’s comfortable. I think she’s elevating and jumping higher than ever. With (Hannah) Lockin who takes the ball really high also, they’re both able to play high and she’s hitting out of her hands faster. Part of it is the growth and maturity of the other girls understanding that we have digs that create kills for middles. That’s got to be a staple for our defense.” -head coach Ryan McGuyre

WHAT’S NEXT
The Bears hit the road to compete in the Cougar Challenge, hosted by Washington State. BU faces the Cougars Thursday at 10 p.m. CT in Pullman, Wash.

The Gauchos (0-3) faced the Bears less than 24 hours after being eked out by No. 15 Florida State in a five-set thriller, a match that saw UCSB sophomore outside hitter Lindsey Ruddins land a rally scoring era program-record 36 kills alongside career nights from sophomore outside Chloe Allen (24 kills) and junior setter Lexi Rottman (60 assists).

Making her debut as an outside for UCSB, senior Sydney Bast (normally a defensive specialist) finished with a team-high nine kills on Sunday. Junior libero Emilia Petrachi was the Gauchos’ top defensive producer with 16 digs, giving her 54 digs for the weekend.

Baylor (2-1) was led by the twin threat of Shelly Fanning and Yossiana Pressley, who finished with 13 kills apiece, with Fanning doing so on .765 hitting.

Bast had a scorching-hot start for UCSB, putting down five kills on an errorless ten swings in the first set. Unfortunately, that wasn’t enough to overcome an 8-2 rally by Baylor to close the set.

The Bears jumped out to a 12-4 lead in the middle set, thanks in part to four of the team’s six blocks in the stanza, and cruised from there to a big two-game advantage.

The third set was tight early, with the teams battling to a 9-9 tie. Unfortunately, Baylor got on a roll and took control with a 9-2 run to make it 18-11. A pair of kills from Chloe Allen (six kills, seven digs overall on the night) and another from Nicole Omwanghe briefly swung momentum back in the Gauchos’ favor, but the Bears went on to end the match by winning the final four points in a row.

UCSB looks to bounce back next weekend at the Utah State Tournament in Logan, Utah. The Gauchos open that tourney against Montana State at 3:00 p.m. PT on Friday before taking on Pacific and Utah State in a Saturday doubleheader.