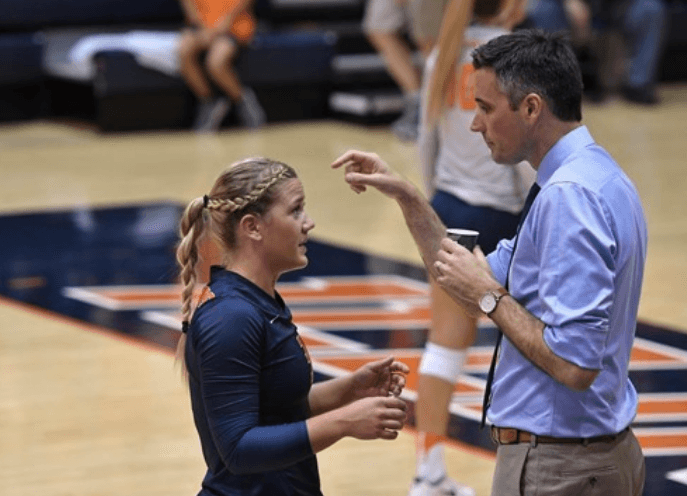 2016 AVCA Honorable Mention All-American Brandi Donnelly of the University of Illinoiscaught up with Scott Richey of The News-Gazette earlier today, discussing... Current Photo via Illinois Athletics

2016 AVCA Honorable Mention All-American Brandi Donnelly of the University of Illinoiscaught up with Scott Richey of The News-Gazette earlier today, discussing everything from her prep career to coffee breaks, but the impending return of her former coach kept popping back up in conversation.

After eight seasons as head coach, Kevin Hambly traded Urbana-Champaign for Palo Alto, taking the reins of the storied Stanford program from volleyball legend John Dunning. On September 8th Hambly will return to Huff Hall to play his former team for their home opener before the loud, rowdy members of the Spike Squad.

“What do you think it will be like playing against Hambly’s team?” Richey asked her.

“I don’t really know. I think we’re going to be really fired up. We’ve been talking about it a lot, but we also know we need to stay calm. I think in between every point, we need to recollect ourselves. I think it will definitely be a point-by-point thing. Nothing, really, we can say before the game because the emotions will kind of take over when it starts I think.”

Both teams had strong opening weekends, each going 3-0 to kick off the 2017 season. The Cardinal went 9-0 in sets, trouncing Long Beach State, Iowa, and Wright State. Illinois had similar success, going 9-1 in sets, dropping only one to Montana State in an eventual 3-1 victory. They swept Gonzaga and Air Force for their other two victories.

With the core of their 2016 national championship team returned, the Cardinal certainly seems the favorite over the youthful Illini, coached by first-year coach Chris Tamas. However, the 2016 National Freshman of the Year and First Team All-American Kathryn Plummer has been moved from outside to opposite to replace another All-American, the 6-8 Merete Lutz, who is currently out with an injury. Plummer’s move has left Stanford without a true bailout hitter on the outside.

Defense will be key for the Illini if they want to beat the Cardinal September 8th. Donnelly’s skill and leadership from the back will help keep the team steady, while 2016 All-American Honorable Mention Ali Bastianelli, who already has 25 blocks on this season, could provide a wall at that the net that may shut down the Cardinal, especially their youthful, slightly undersized outsides.

“I think it will be extra crazy [for the Sept. 8 opener] because we’re playing Stanford and having Kevin back and everything,” Donnelly told Richey during her interview. If both teams have strong showings Labor Day weekend, the Illini home opener will certainly be one to watch.

Donnelly is the only returning senior on a team with 9 freshmen.