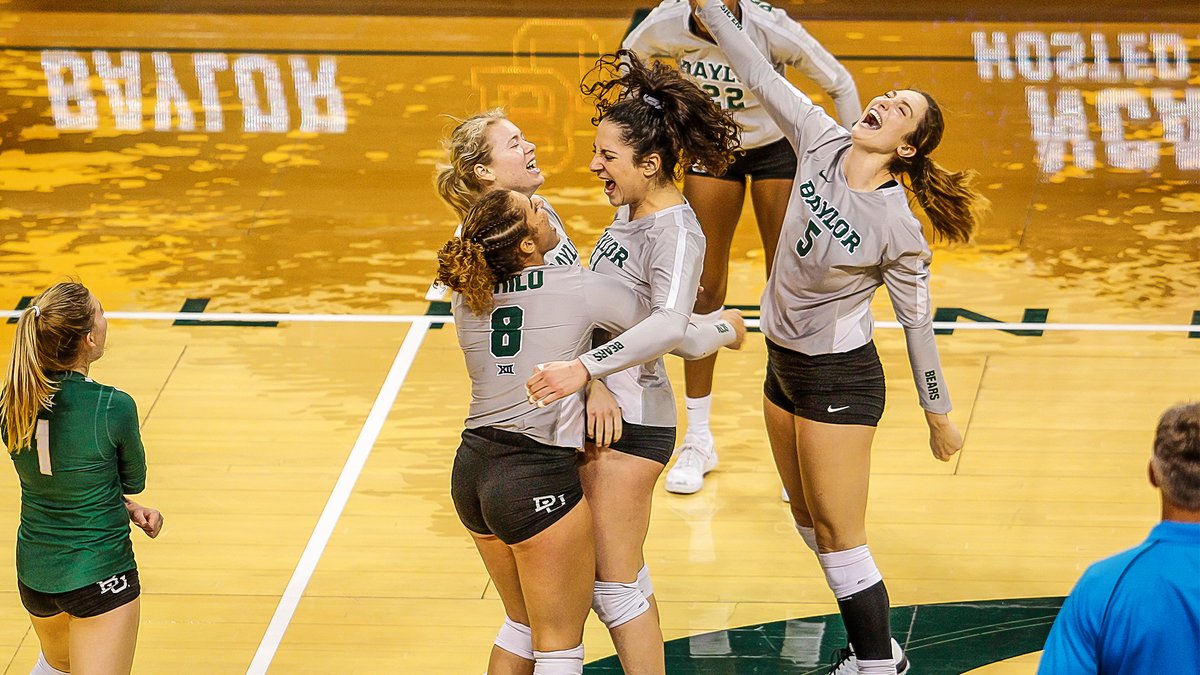 Baylor is headed to the NCAA Second Round for the third consecutive season and captured its third-straight 20-win season under head coach Ryan McGuyre.

Shelly Fanning led the Bears with 18 kills and posted a career-high 10 blocks for her first career double-double. Yossiana Pressley put down 17 kills, and Aniah Philo had her 13th double-double of the season with 14 kills and 21 digs.

Philo and Gia Milana also posted their 1,000th career kill in the match, combining for 21 on the outside.

Baylor came out fast against the Rainbow Wahine and took a slim 15-13 lead at the media timeout. Baylor led 19-14 after back-to-back Pressley kills, but the Rainbow Wahine would tie it at 23-23 with a kill. BU closed out the frame on two attack errors, falling 25-23.

The Bears found themselves down 18-14 in the fourth frame after a Rainbow Wahine block. Baylor jumped in front at 22-21 and used a block to force a fifth set, 26-24.

Baylor jumped in front, 4-2, but gave up a 4-0 run to fall behind by two. Baylor climbed its way back into the set and took the lead at 12-11 with a Philo kill. Hawai’i took a 14-13 lead to force a Baylor timeout, but the Bears rolled off three consecutive points on the right side to end the match, 16-14.

HIGHLIGHTS
• The Bears clinched its third-straight win in the NCAA First Round and are now 6-6 all-time in the NCAA Tournament.
• Baylor stormed back from a 2-0 deficit for the second time this season but for the first time in postseason play, previously 0-5.
• Baylor has its third consecutive 20-win season for the second time in program history (1991-93).
• Baylor is now 3-2 in NCAA tournament matches under Ryan McGuyre.
• Baylor collected its first-ever win against Hawai’i, improving to 1-6 all-time against the Rainbow Wahine.
• Baylor has won a postseason match for the third consecutive season.
• Shelly Fanning posted her first career double-double with 18 kills and a career-high 10 blocks.
• Fanning is the ninth player in Baylor history to record a postseason double-double.
• Yossiana Pressley posted her 25th double-digit match with 17 kills.
• Aniah Philo collected her 1,000th career kill against the Rainbow Wahine, finishing with 14 kills and a team-high 21 digs.
• Gia Milana collected her 1,000th career kill against the Rainbow Wahine on match point, finishing with seven.
• Shanel Bramschreiber tied a match-high two service aces Thursday night.
• Baylor is 14-7 as a ranked team in 2018 and 23-10 as a ranked team under McGuyre.
• The Bears are now 4-0 in five-set matches in the postseason.

STAT OF THE MATCH
10 – the career-high block count by junior Shelly Fanning.

TOP QUOTE
Head coach Ryan McGuyre
On the win…
“What a tough battle. It could have gone either way. I thought Hawai’I did a phenomenal job against us defensively. We hit pretty low most of the night minus the third set. I thought the serve and pass was the difference maker at times. We battled but put up a lot of errors. Our girls did a good job blocking, but it came down to who was getting good touches off the block. We had a lot of bright moments, but Shelly (Fanning) was a bright spot, sustaining us the whole time.”

BU looks for its second-ever win in the NCAA Second Round and a chance to return to the NCAA Sweet 16 for the first time since 2009.

Senior libero Tita Akiu played inspired defense and recorded a Hawai’i single-match program record (rally scoring) of 34 digs. Junior setter/hitter Norene Iosia recorded her fifth triple-double of the season, while seniors McKenna Granato and Faith Ma’afala both concluded their collegiate careers by each posting double-doubles at the Matthew Knight Arena on the University of Oregon campus.

Akiu was flying all over the court on defense. The senior transfer from Texas Tech bettered the former record set by Melissa Villaroman of 33 digs in a five-set match against Fresno State in 2002. Akiu finished her one-year career at UH with 465 total digs in 100 total sets played in UH’s 27 matches this season. That ranks her at No. 4 in UH’s single-season record book for digs, leapfrogging Elizabeth Ka’aihue‘s mark of 444 digs in 112 sets played in 2007. Akiu also passed former UH greats Teee Williams and Sarah Mendoza who both had 437 digs in 1988 and 2014 respectively.

Iosia, UH’s dual-threat setter/hitter notched her fifth triple-double to go with her 15 double-doubles this season. She tied Granato with a team-high 11 kills with 14 assists and 15 digs. She was also in on three blocks.

Granato finished her four-year Rainbow Wahine career with a match-high 11 kills plus 10 digs for her 12th double-double of the season. She finished her career with 1,055 total kills which ranks her at No. 19 in the UH career record books. Granato filled her stat line with two blocks, two service aces and one assist. Fellow senior, Faith Ma’afala notched her 10th double-double of the year. The setter logged a team-high 26 assists with 15 digs.  She also added two service aces.

In just her sixth start of the season, sophomore middle hitter Skyler Williams proved to be a force at the net, rejecting a team-high seven blocks (two solo), which was a season-high for Williams. She also added four kills and had one dig.

The second set saw UH build as big as an eight-point lead three different times in the middle of the frame, the last coming at 21-13. But Baylor fought their way back into the set on a 7-0 run. UH was able to hold off the Bears by scoring four of the last five points—including the last three straight points to capture Set 2, 25-23 on a Casey Castillo kill.

Taking their momentum into Set 3, Baylor raced out to an early lead and then just pulled away to take the frame, 25-14. Hawai’i hit .000 in the set, with eight kills and eight errors in 34 attacks, while Baylor hit .371.

The fifth set was full of momentum swings for both teams. Baylor jumped out to a 4-2 lead on a 4-to-0 run. Hawai’i then scored the next five-straight points to take a 7-4 lead. Baylor would then score five of the next six points to jump into an on to a 9-8 lead. The two teams would tie then tie each other three more times late in the set, and UH actually served to the match, after Granato recorded her 11th kill to give the ‘Bows match-point at 14-13. But Baylor won the final three points for a 16-14 Set 5 win for a 3-2 match victory.

Baylor’s Shelly Fanning led a trio of players with double-digit kills with match-high 18 kills and with blocks with 10. Hannah Locking had a match-high 31 assists.