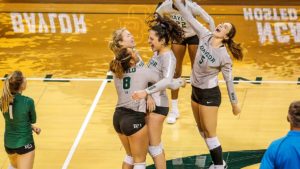 TCU’s élan McCall averaged 5.43 kills and 4.29 digs per set, while hitting .516 and converting 97 percent of her serve reception chances (33 of 34) en route to VolleyMob Player of the Week honors.

For the second consecutive year, the Cal Poly volleyball team has won the Big West conference and clinched a spot in this year’s NCAA Tournament after sweeping UC Riverside (25-17, 25-11, 25-14) Friday