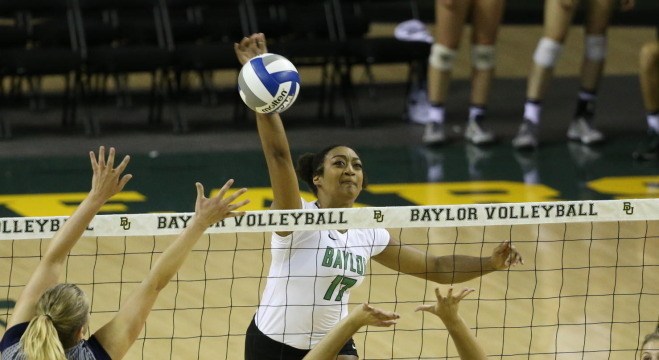 The Bears began the match by answering everything Tech (10-8, 0-3) threw at them. Building an insurmountable lead with a 10-2 run, the Bears looked dominant throughout the first set.

Though Katie Staiger (Staiger was this weeks National Player of the Week) had a timely kill to end Tech’s 4-0 run at the beginning of the set, sophomores Aniah Philo and Ashley Fritcher seemed to be Baylor’s key pieces, ending the set with three kills apiece. Tech (10-8, 0-3) woke up in the second set, leading the Bears all the way up to set point. But, when a challenged call was overturned in Baylor’s favor, the Bears were able to steal the set by going on a 3-0 run, winning 26-24.

Junior libero Jana Brusek, the reigning Big 12 Defensive Player of the Week, kept the Bears alive throughout all three sets and finished the night with 20 digs.

“Jana’s essential,” second-year head coach Ryan McGuyre. said “If our setter is the quarterback, Jana is the middle linebacker for us. Our defense is why we’re winning. Katie has some good numbers, but our defense and our opponent hit percentage is why we’re in all the matches. And now that we’ve learned how to win, we’re able to finish them off.”

“I felt like every time she served, we took them out of system, or it helped our blocking defense and set up what we wanted to do there.” McGuyre said.

The Bears weathered the storm in the face of a late Tech push, posting a hitting percentage of .326 in the third set over Tech’s .191. Even after the 2-0 start in Big 12, they know there are greater challenges coming.

“We’re thrilled, but not satisfied,” Brusek said. “I think each of us are so grateful to have this opportunity to show people who Baylor is and what legacy we want to leave. We’re happy about the wins, but we’re hungry for more.”

Staiger also contributed to the great serving effort put forth by the Bears, recording three service aces of her own while posting 19 kills and 10 digs. Though the second set was a little too close for comfort, McGuyre said he was pleased overall with his team’s effort.

“I think it shows that there has been great progress, and that we are learning how to win. It wasn’t the consistent Baylor that I’d like to see, but it also showed a little bit of our grit that we’ve picked up this year to finish them off.”

Baylor, trying to match the school-record winning streak of 11 set by the 2009 team that advanced to the NCAA Tournament Seet 16, will face ninth-ranked Kansas (12-2, 1-1) at 1 p.m. Saturday in Lawrence, Kan. oach McGuyre said the team’s focus has to be on the next match, not the 10-game winnng streak or all the other tests down the road.

“We’ve got so much season left to go, and it’s going to be a grind,” he said. “We’re going to see some very physical teams down the stretch. Every match in conference is what we’re working hard to get.”

The 10-match streak is the first since the 2009 season, where the Bears advanced to the NCAA Round of 16. The win was Baylor’s 22nd win in 24 matches against the Red Raiders, including four in a row.

Sophomore Ashley Fritcher got the Bears out to a fast start in set one, hitting 1.000 (3-for-3). A 5-0 run behind redshirt junior Katie Staiger’s serve pushed the Bears into a comfortable lead that would give BU a dominant 25-17 first-set win.

Baylor played from behind most of the second set after registering eight attack errors in the frame. The Bears then fought off two set points and used a block to take set two in extra points, 26-24.

BU jumped out to an early 5-2 advantage in the third set, and would never trail en route to the 25-19 third-set win for the sweep.

HIGHLIGHTS
• Katie Staiger led the Bears with her 8th double-double and second-straight of the season, adding 19 kills and 10 digs.
• Baylor has now won 10 matches in a row, dating back to Sept. 9. This is the first 10-match winning streak since 2009 (Aug. 28 to Sept. 12).
• Morgan Reed added 39 assists in the 3-0 sweep.
• Jana Brusek tallied at least 17 digs for the fifth-consecutive match dating back to Sept. 17 against Washington State. She finished with 20 digs vs. TTU.
• Baylor improves to 30-47 in the all-time series and 17-18 against the Red Raiders in Waco.

STAT OF THE DAY
10 – the winning streak for the Bears, one away from tying the program record for consecutive wins, set by the 2009 squad.

QUOTE OF THE MATCH
“I liked how we served tonight. I thought overall we struggled a little bit. It wasn’t very clean, but six aces on one error, that was the point of focus for us in practice this week so Jana and Katie I thought did a great job. Jana especially [with] three aces, but I felt every time she served we took them out of system and helped our blocking defense set up what we wanted to do there.” – Baylor head coach Ryan McGuyre

WHAT’S NEXT
Baylor puts its Big 12-best 10-match winning streak on the line as it heads to Lawrence, Kan., to take on the No. 8 Kansas Jayhawks Saturday at 1 p.m. The Big 12 matchup will air on ESPN3.