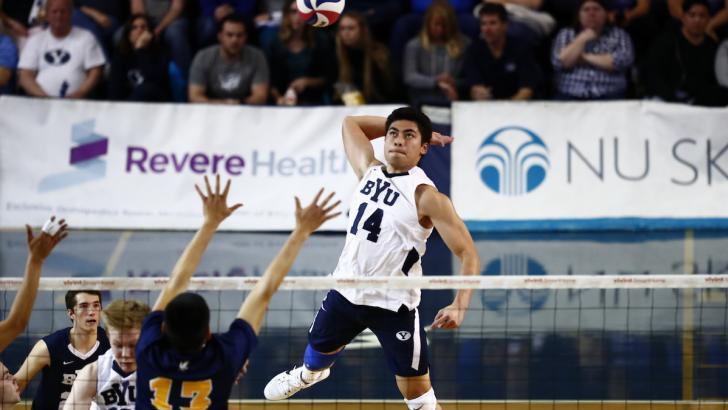 The 3rd-ranked BYU men’s volleyball team swept past UCSD 3-0 on Friday evening, the first of a two-game weekend stand against the Tritons, in an offensive slug-fest that was a few points from being a very different outcome.

“They had some talented players with pretty good arms, and they definitely believed they could come in here and wreak some havoc,” BYU head coach Shawn Olmstead said. “We had a bunch of guys in new roles and positions and we just have to help them continue to believe in the process.”

Those new roles have been in part forced by the absence of BYU junior All-American opposite Ben Patch, who has missed the team’s last two games. BYU says that Patch is not injured, and that its a coach’s decision to not play him based on the competition.

With Patch on the bench, freshman outside hitter Storm Fa’agata-Tufunga cracked double-digit kills for the first time in his career with the Cougars with 10 kills on a .471 hitting percentage. He also led the teams in digs with 5.

Senior Jake Langlois led BYU with 17 kills, tying his season high, hitting .353 with 2 blocks and 2 digs on his stat-line as well. Langlois is averaging 3.6 kills/set this year as a senior, That matches his full-season career high from a truncated 2011 season that saw him play in just 36 sets for BYU. Langlois, a 6’10” outside hitter from San Jose, didn’t play volleyball until he got to college – though his dad played volleyball at BYU.

The first set was close as late as 22-20, before BYU pulled away a little at the end, but the final two were each decided by the minimum 2 points. Set 2 was tied at 24 all before back-to-back in-system Jake Langois kills finished the set. BYU actually had to fight back a late UCSD run in the final set, with the Tritons scoring three-straight points to pull themselves within 1, but another in-system kill from Langlois ended the night.

The two teams play again on Saturday at 6:00 MST back in the Smith Fieldhouse.

“They had some talented players with pretty good arms, and they definitely believed they could come in here and wreak some havoc,” BYU head coach Shawn Olmstead said. “We had a bunch of guys in new roles and positions and we just have to help them continue to believe in the process.”

UC San Diego (5-8, 2-7 MPSF) opened the first set with a 3-0 run to take an early lead. Langlois scored the first point of the night for the Cougars with a kill, but the Tritons held the momentum and built a 12-9 lead. Back-to-back kills by junior Leo Durkin brought BYU within one before a Langlois kill tied the score at 12-12, forcing a UC San Diego timeout. The teams traded points before a kill from Tim Dobbert jump-started a 4-1 Cougar run leading to an 18-15 BYU advantage. The Cougars remained in control and took the set 25-21 after a kill by Dobbert.

BYU scored first in the second after Fa’agata-Tufuga collected a kill, but the Tritons quickly answered and established a 5-3 lead. The Cougars rallied to tie the score at six after several errors by UC San Diego. The momentum shifted after a 3-1 run to put the Tritons ahead 15-13 at the media timeout. Out of the break, BYU put together a 5-3 rally that evened the score at 18-all. With the teams deadlocked at 24, Langlois slammed home back-to-back kills to help the Cougars take the close set 26-24.

In the final set, BYU jumped out to a 6-4 lead after a kill and a lightning-fast ace by Fa’agata-Tufuga. A kill by Langlois started a 4-1 run and the Cougars took a 10-5 advantage leading to a Triton timeout. A 4-1 rally by UC San Diego brought the score to 18-16 and a few points later the Tritons pulled to within a single point. BYU regained control to take a 24-20 advantage, but UC San Diego fought off three-straight set points to force a Cougar timeout with the score at 24-23. Out of the break, Langlois slammed home another kill for a 25-23 third-set triumph, completing the sweep for BYU.

The two teams will play again on Saturday, Feb. 18, at 6 p.m. MST. Fans will be able to get into Saturday’s match for free with a Pass of All Passes and the match will be televised on BYUtv and simulcast on BYU Radio – Sirius XM 143. Links to video/audio and live stats can be found on the BYU men’s volleyball schedule page.

With a third consecutive defeat, all in straight sets, on the heels of five wins in a row, UC San Diego drops to 5-8 overall and 2-7 in the MPSF. The Tritons are indeed receiving votes just outside of the national top-15 poll this week for the first time since January of 2014. BYU moves to 11-2 overall and 6-1 in league play.

The Tritons led as late as 13-12 in the opening set and 22-21 in game two, but the home side prevailed in both. They then inched to within one at 24-23 in the third with three straight, but the Cougars managed to convert their fourth match point.

“If you look at the statistics from the match tonight, we did a lot of good things,” remarked UCSD head coach Kevin Ring. “We hit .324 to .348 by BYU, had 7.5 stuff blocks to 6.0, and 24 digs to their 20. In the end, the big difference was they had 10 more kills than us, and eight more points on the night. We did a lot of good things, but for us to win a set, get a second and try to win the match, we have to play some of the key points a little bit stronger.”

Ian Colbert and freshman libero Ryan Lew collected eight kills and a match-high seven digs, respectively. Senior outside hitter Josh Schmidt made his 2017 debut as a late-game substitute in both the second and third, having recovered from injury.

“We didn’t slow their left-side attackers down very well,” added Ring. “They both hit very well with good efficiencies and a lot of kills. That will be a focus of ours tomorrow when we play them again.”

UCSD scored the first three points of the night and was up by as many as four at 11-7 in the initial frame. The Cougars broke a third and final tie score, of 14-14, with three points in a row.

“We got off to a good start in the first set, and were up 11-7. Unfortunately, within two servers by BYU, they had tied the score at 12-12. You do all of this work to establish a lead, and we have to be able to hold onto that a little longer. Certainly you credit BYU for making some good plays and getting themselves back in it, but there are things that we can do to sustain some runs and get the key sideout when we need it.”

The Tritons hit a strong .550 (13-2-20) in game two, which featured 16 tie scores and six lead changes. A 3-0 mini-run, with a Bryan Zhu (San Diego/Rancho Bernardo HS) kill preceding Syftestad’s two aces, gave them a 5-3 edge early. A second 3-0 stretch, on a Beamer kill, Cougar error and combination block by Beamer and Syftestad, pushed UCSD back on top, 10-8. The set continued in the tightest of manner, with a 3-0 run giving the home side the edge at 19-18, only for the score to be knotted six more times. Finally at 24-24, back-to-back Langlois kills ended it.

BYU notched set three’s first two points and never trailed and was never tied. The Cougars were up 10-5 at UCSD’s first timeout. The Tritons gradually caught up at 20-19, a Devin Pontigon (Oceanside/El Camino HS) kill punctuating a 3-0 run and forcing a BYU timeout. After the sides traded single points, the Cougars tallied the next three to push it to match point at 24-20. To UCSD’s credit, it took the next three on kills by Syftestad and Schmidt, his first, and a triple stuff by Schmidt, Syftestad and Zhu. After their second timeout, the Cougars responded with a Langlois kill.

UC San Diego remains in Utah for a second matchup with the Cougars, this one of the non-conference variety, on Saturday, Feb. 18. First serve inside Smith Fieldhouse is set for 5 p.m. PT (6 p.m. MT), with the contest airing live to a national television audience on BYUtv.