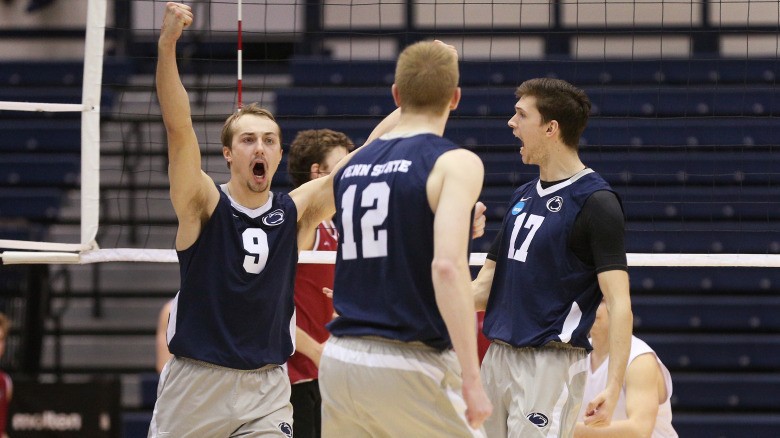 The EIVA, which only invites 4 of its 8 member teams to the conference tournament with an NCAA bid at stake, tightened up significantly earlier this week when conference leaders Penn State and Sacred Heart were both upset ahead of their big showdown on Saturday night.

Coupled with an NJIT upset of #15 George Mason on Friday, suddenly 2 losses is a dicey position to be in with 6 weeks left in the regular season.

In spite of battling a run of injuries the Nittany Lions pulled out a marathon 3-setter against Harvard on Friday to remain in 1st place in the conference.

Aidan Albercht returned to the court for Penn St. and played well with 10 kills and a .333 hitting percentage. The team was still without outside hitter Chris Nugent, though, who leads the team in kills this season.

In his absence, Calvin Mende and Lee Smith, the teams next-two-leading scorers, stepped up with 15 and 10 kills, respectively. Smith also had 7 digs and 4 blocks, while Mende chipped in 3 digs and 5 blocks to help carry the load.

The game included a 68-point second set, which finally ended from back-to-back kills by Riley Moore and Aiden Albrecht.

Largely as a result of that second set, Penn State’s 53 kills ties UC Irvine as the most kills by one team in a three-set game this season.

The win re-sets Saturday’s game with Sacred Heart as a battle for the top spot in the conference. The two teams face off at 7:00 Eastern Time back in the Rec Hall.

UNIVERSITY PARK, Pa. – No. 13 Penn State (9-5, 4-1) grabbed their fourth win of the season in EIVA play as they swept Harvard in Rec Hall Friday night behind the efforts of Lee Smith and company.

“When you view the EIVA and the way it is this year, you really have to protect your home court. With all the five game matches that have gone on, anytime you can get out with a 3-0 win youre pretty fortunate.”

Lee Smith led the way for the Nittany Lions against the Crimson, finishing the night with 16 kills on 29 attempts hitting .379 on the night. Smith also recorded seven digs and four blocks earning Mike Anderson Memorial Player of the Game honors.
Calvin Mende and Aidan Albrecht contributed 15 and 10 kills, respectively, while Luke Braswell led the Lions in assist recording 43.

Mende led Penn State in blocks individually while the team registered 10.0 blocks on the night.

Penn State opened up with a 25-17 first set win over the Crimson to take a 1-0 set lead into the second set.

A few plays later, Harvard would extend their lead to four holding a 12-8 advantage following a Nittany Lion service error.

Penn State kept their composure, working their way back into the game finding themselves tied 19-19 with Harvard forcing the Crimson to call their first timeout.

Following the timeout, Penn State and Harvard exchanged points leading to extra volleyball in the second set as the teams pushed the score to 33-33 before either team could put together back-to-back points to close out the set as Penn State did with kills from Matt Callaway and Aidan Albrecht to take the set 35-33 and hold a 2-0 set advantage.

Harvard battled hard in the third set, tying the game three times before dropping the set 25-22 in favor of Penn State giving the Nittany Lions their fourth sweep of the year as well as fourth EIVA win on the year.

Penn State will return to the court tomorrow night as they host Sacred Heart for a 7 p.m. match at Rec Hall during Military appreciation night.Craig Houtz

The Crimson was held to a .121 attack percentage in the opening frame, despite four kills from White. In the second stanza, Harvard and PSU went point-for-point, until a service ace from Trevor Dow started a 6-5 run for the Crimson. The two teams battled until the decisive point 25th point, but the Crimson tied it up with a kill from White. The Crimson and the Nittany Lions were tied at 33-33, until a kill from Matt Callaway gave PSU the set point.

Despite two consecutive kills from Gretsch in the beginning of the third stanza, PSU held onto their three-point advantage, averaging .310 on the attack. The Nittany Lions went on to win the third stanza, 25-22.

The Crimson returns to action tomorrow against Saint Francis at 4 p.m.